Zener diodes work in reverse bias in the breakdown region. At breakdown voltage, high current flows. I get till here. I want to know what happens if I increase the voltage after breakdown. Is there an increase in the current or does the current remain more or less the same?

If you look at any Zener diode datasheet, you will see that after reaching breakdown voltage current value increases a lot for small voltage changes. 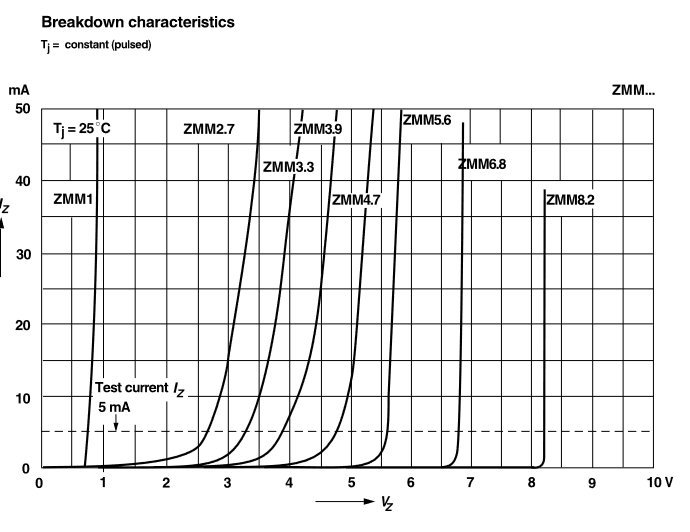 So yes, as you increase the voltage the current will skyrocket on the diode. It will always be as much as it needs to be to keep the voltage drop of the diode near to its breakdown voltage. (Or at least until the diode just simply vaporizes due to the dissipated heat)

Zeners have a breakdown voltage then become more like linear resistors above this max threshold or knee voltage.

In IC’s they use a constant current source to stabilize this voltage.

All Zeners and diodes, LEDs alike have an inverse exponential incremental resistance. If rated at the knee threshold it has an absolute value of Vzk/If. This lowers toward a fixed bulk resistance above this max. rated current Vf/Imax. So the voltage will change with current near this value by that resistance.

This resistance is generally proportional to Vz rating and inverse to Pmax for all diodes with some exceptions.

Programmable Zeners use a constant current low V ref. and a high gain op amp. to ratio multiply the output with feedback to null the error to some limited current value but are most accurate.

For example on 5mm LEDs which act like Zeners, at 20mA roughly ( check datasheet ) IR =1.2 to 1.3V, Red=2.0 to 2.1 White= 3.0 to 3.1 but depending on supplier may have a wider tolerance. Thus ESR or Rs series bulk resistance for these would be around 5 Ohms, 10 and 15 ohms respectively at 20mA. Some OEM’s (like ON SEMI) state the rated “threshold and knee” resistance at threshold for Zeners as Zzt and Zzk. Some Zeners are no better than LEDs but do give more specs on this resistance. There is poor consistency in industry for defining this variable, but with experience,you can estimate it from the power and voltage rating or rely on the datasheets. Small Zeners start at a rating of 5mA and then may decrease with higher voltage to limit self heating.

To compute the voltage error due to equivalent load resistance variation, one estimates the ratio of knee resistance to load R in % and estimate the tolerance variation. This as in all voltage regulators is called “Load Regulation error”.

6
Why does temperature modify the characteristics of a diode?
4
Rationale for operating the diode in the (reverse biased) breakdown region
2
Why use a Zener in a regulator as opposed to a regular diode?
2
Why does the reverse saturation current not vary with the reverse voltage?
2
zener diode i-v confusion
1
Zener Diode Reverse Current
0
Zener diode simulation issue
0
How can a Zener diode maintain a constant voltage?
4
Zener diode voltage regulation
2
Breakdown voltage in diode and Zener diode, what are the practical differences?