How do we derive the values for these Thévenin equivalent circuits?

I am currently studying the textbook The Art of Electronics, third edition, by Horowitz and Hill. Appendix D Thévenin's Theorem says the following:

In Chapter 1 we stated (but did not "prove") Thévenin's Theorem, namely that any two-terminal network whose internal circuitry consists solely of resistors, batteries, and current sources, interconnected in any manner whatsoever, is equivalent (and indistinguishable) from the two-terminal network consisting of a single battery \$V_\text{TH}\$ in series with a single resistor \$R_\text{TH}\$; see Figure D.1. We did not prove it, because, in the spirit of this book, we don't prove anything; we show you how to design circuits, instead. We make an exception here, because it's nice to see something proved, right? 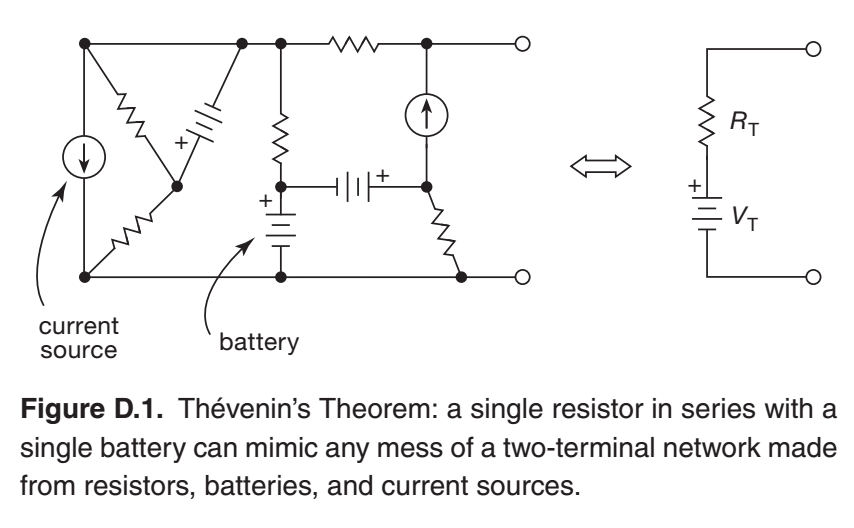 D.1 The proof
For linear circuit elements (here resistors), the "nodal equations" (Kirchhoff's voltage law, KVL, and Kirchhoff's current law, KCL) are a set of linear equations. So we can find any circuit quantity (a voltage or a current), which depends on all the "independent sources" (batteries, current sources), by turning on each source in turn, and adding the partial contributions. (This is exactly analogous to using superposition to find, say, the electric field from a set of charges.) This technique is often useful in circuit analysis.
Here we wish to mimic the \$V\$ versus \$I\$ of the actual circuit with the (simpler) Thévenin equivalent of a single battery in series with a single resistor. Imagine we determine that \$V\$ versus \$I\$ function by applying an external current \$I_\text{ext}\$ that flows through the two-terminal circuit, and observing the resultant \$V\$ across those same two terminals. \$V\$ depends on \$I_\text{ext}\$ and on all the internal batteries (\$V_\text{int}\$) and the current sources (\$I_\text{int}\$). 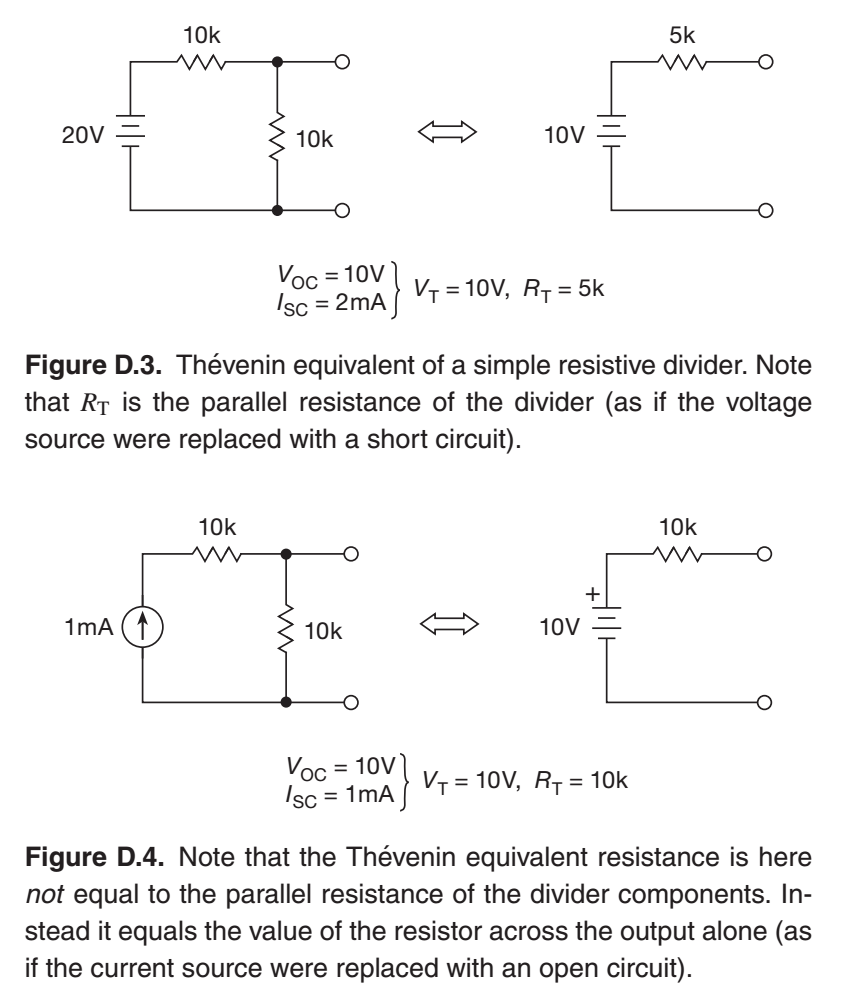 After reading the answers and comments, and referring back to the textbook, it has become clear that the textbook has not actually properly explained this concept, and has simply introduced it with the implicit assumption that the reader somehow already understands the details. This is despite the fact that this is, explicitly, an introductory textbook to electronics, with the assumption that the readers have no prior study of the subject. I have no idea how a textbook referred to as "the bible of electronics" has such poor explanations – especially when it's in its third edition!

An ideal current source has an infinite series impedance. If you put a resistor in series with that current source, you're adding the value of your resistor to an already infinite resistance (open circuit), which makes no change. So the series resistor is doing nothing in D.4.

This is what they mean when they say that you should open-circuit all current sources and short-circuit all voltage sources when calculating the Thevenin or Norton impedance of a circuit; you're replacing them with their equivalent impedances of infinity and zero, respectively.

In figure D.4 we have a current source, and two resistors. To find the Thevenin resistance we turn off (open circuit) the current source.

Now, the top resistor \$ R_3\$ is effectively disconnected from the circuit (no current can run through it). Therefore the Thevenin resistance (the resistance seen by the terminals) simply becomes \$R_{th} = R_4 =10\text{k}\Omega\$

An alternative (but equivalent) way of getting the Thevenin resistance is to make all (independent) voltage sources 0 (i.e. a short) and the current sources also 0 (an open circuit). Then you can see why the R's are going to be different.

If I added this resistor (in red) in parallel with the voltage source, do you see that it has no effect on the outcome: -

That added red-boxed resistor is equivalent to a resistor in series with a current source.

Calculate what happens if you stick a 10 kohm load resistor to the right side of the circuit in each diagram, between the terminals. Check the voltage over that load (and current and power, if you like).

Looking at the circuit with the current source, there's a 1 mA current through the top resistor, and then that splits in two: 0.5 mA through both the 10 kohm shunt and the 10 kohm load resistor. That's 0.5 mA * 10 kohm = 5 V over the load. For the equivalent circuit on the right, we get 10 V * 10 kohm / 20 kohm = 5 V over the load. Indeed the two lower circuits in D.4 are also equivalent with each other, but different from the ones at the top in D.3.

Not the answer you're looking for? Browse other questions tagged circuit-analysis thevenin or ask your own question.