Howto discharge a capacitor through an LED by removing the power

I'm trying to learn about capacitors (charging / discharging) so I've built a very simple circuit where I have an LED, a 220 ohm resistor and a 4700uf capacitor in series. Power supply is 5V. The idea is simply to see examine the charging / discharging behavior of the capacitor. The circuit doesn't have any practical use.

When I hookup the power supply the LED lights up and then dies out completely as the capacitor is fully charged (as expected).

I was looking at a How Capacitors Work article where it was stated that by replacing the power supply (in their case battery) with a wire, the capacitor would discharge through the bulb.

If I want to discharge the capacitor through the LED I not only need to remove the power supply and replace it with a wire but I also need to reverse the polarity of the LED.

Now this makes sense if you look at the polarity of the LED and the capacitor. As soon as I add a power supply I again need to switch the LED around.

Is this just because of the nature of the LED (it being a diode and only allowing current to pass in one direction). A DC bulb doesn't have this issue as it doens't have polarity and can be hooked up either way ? Or is my circuit / thoughts on this completely wrong ? 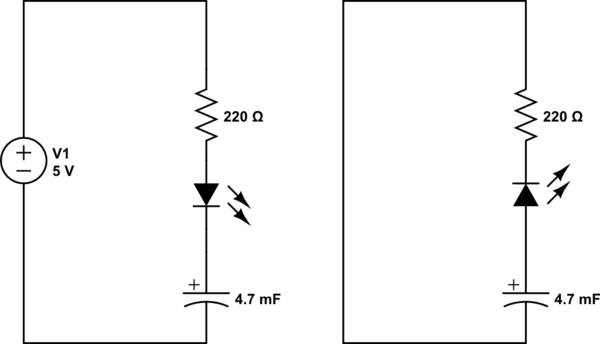 That article is crap, and you should probably forget you ever saw it. Besides the fact that it's totally wrong, as you've discovered, it's full of half-truths that cultivate an incorrect understanding of how electrical phenomena actually work.

The plate on the capacitor that attaches to the negative terminal of the battery accepts electrons that the battery is producing.

In the first few paragraphs, that article uses the word charge in several senses. An experienced engineer can distinguish the senses by context, but the novice is more likely to confuse them. Go read Bill Beaty to immunize yourself against this misconception.

The bulb will get progressively dimmer and finally go out once the capacitor reaches its capacity.

Not exactly true. The bulb will go out once the voltage across the capacitor is equal to the battery voltage. When this happens, there can be no voltage across the bulb, and thus no current, thus no light. I don't know what they mean by capacity in this sense, but it seems to me that they are phrasing it this way to avoid explaining how capacitors actually work. You might define a capacitor's "capacity" any number of ways, but they haven't defined it at all. This kind of half-thinking isn't going to help you understand once you figure out that the explanation is incomplete.

A capacitor's storage potential, or capacitance, is measured in units called farads.

If you take "capacity" and "storage potential" as synonymous, as anyone would naturally do, this is wrong and self-contradictory. If this were true, then we could re-write the previous statement as

...which is totally bogus. Ordinary capacitors don't change capacitance under normal operation conditions. Again, the problem here is they haven't fully defined the underlying concepts. If capacitance is a capacitor's storage potential, then what is it storing?.

A 1-farad capacitor can store one coulomb (coo-lomb) of charge at 1 volt.

Here, they try to define the stuff that the capacitor is storing, but it hardly makes sense. The problem is if you use words like "capacity", this implies there is some sort of "full" or "at capacity". But, there is no concept for an ideal capacitor. If you push 1C of charge through a 1F capacitor, the capacitor will have a voltage of 1V. For 2C, you get 2V, and 1000C gets you 1000V. You can push 1000C through a 0.5F capacitor also, but it will then be at 2000V. An ideal capacitor is never full, and you can push charge through it forever and it will never be "full". That's not a capacity, it's the ratio of charge to voltage, which is evident in the definition of farad (a farad is a coulomb per volt):

Real capacitors, incidentally, have a maximum voltage, which if exceeded will damage or destroy the capacitor. So in this sense, a capacitor can be "full" and can have a "capacity". But, this is not how this article is using the word.

I could probably write an entire article on the problems with that article, but hopefully you get the idea. Please wipe your memory of what that article has said, and seek a more sound explanation.

Is this just because of the nature of the LED (it being a diode and only allowing current to pass in one direction).

You are absolutely correct. For this circuit:

Or, you could use a bridge rectifier and an SPDT switch: - 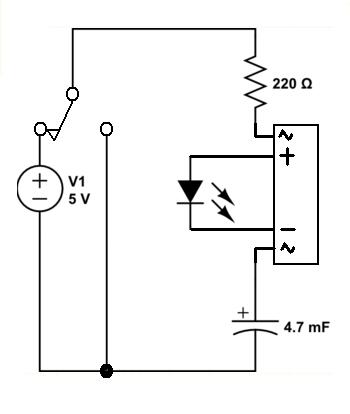 This time, whenever you throw the switch you get a surge of light from the LED. Yet another pointless circuit from the muppet lab BUT good fun.

The switch saves you having to disconnect the battery and place a short in its place and the diode bridge always ensure there is a path fro current into the capacitor when charging or discharging.

Not the answer you're looking for? Browse other questions tagged led capacitor or ask your own question.