Is this method valid for conversion?

It is possible that I have misunderstood the requirement - but if not...

The vintage way of getting differential audio signals from a single-ended input consisted of merely using an audio frequency transformer, usually a 2 pin input 3 pin output little thing, with a 1:1 turns ratio.

In addition, a turns ratio other than 1:1 allows impedance matching / voltage gain if desired.

This is an extended comment to address what I believe is an important distinction to make - the distinction between a balanced output and a differential output.

According to the link provided by Phil Frost, we have:

A good, accurate definition is "A balanced circuit is a two-conductor circuit in which both conductors and all circuits connected to them have the same impedance with respect to ground and to all other conductors...

Thus, this would be an example of a balanced output:

Though the output is balanced according to the above definition, it is not differential.

This is an example of a differential output:

Finally, an example of a balanced and differential output: 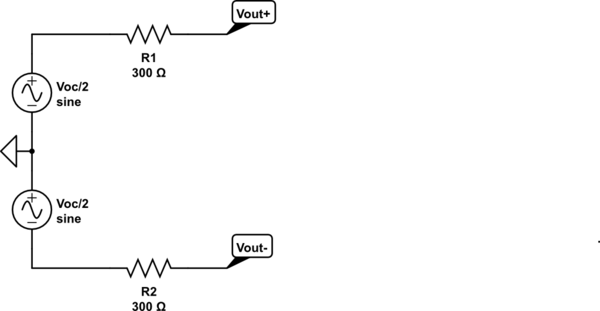 As to the OP's question:

The answer is yes, of course there is and certainly, as Anido Ghosh answers, a 1:1 audio transformer will give you both a balanced and differential output as well as isolation which may or may not be useful.

As other answers have pointed out, you can can also convert to differential only or balanced only.

Whether you actually need both, one or the other, or neither is a matter for experiment to decide.

In all likelihood, you'll probably find that the Bluetooth module works just fine with a single-ended input.

Here is a diagram from the design of high-performance balanced audio interfaces by Bill Whitlock & Rod Elliott - it shows several methods:

Note the top left circuit. What I'm proposing is a cut-down version of this. The non-inverting stage I'm proposing can be removed leaving only the inverting op-amp stage. The diagram does show RS1 and RS2 for when impedance balancing is required and I'm not saying you don't need these components but in many circumstances they are not needed, particularly in the application in the question.

The schematic in your question does not convert to a differential signal. It is merely a circuit to bias two microphones (likely, electret microphones).

To make a differential signal, you need two signal lines with equal impedances that carry the signal in their difference. What you don't need is an inverted copy of your signal. There are a lot of ways to accomplish that, but with modern electronics, at audio frequencies, a common approach which works well enough while remaining quite simple is this:

This is from an article, Design of High-Performance Balanced Audio Interfaces, by Bill Whitlock & Rod Elliott. Notice there's no inverting of the signal. R2, R3, R4, and C1 are the balancing. It's important that R2 and R3 are exactly the same value: use 0.1% tolerance resistors.

Not the answer you're looking for? Browse other questions tagged audio differential or ask your own question.