Remove an LED from a circuit

I have bought a webcam from which I would like to remove an LED (burning it is also fine for me).

By doing so, I could obviously change the way the circuit works, so my questions are:

By the way, the guy here just snapped the LED right off, but I couldn't understand how did he figure out that that won't damage the camera.

Also, there's this project, which shows the insides of another camera (which looks very much the same as mine)

Actually, I'd say that both of the other answers are half-wrong. The true answer is:

Basically, there are 3 possible options (although they aren't the only ones possible):

1a) (most common) a LED receives a current through a current-limiting resistor, the current path ends after the LED (ground etc);

In this case you can safely remove the LED, making it open-circuit. You can keep the resistor, the current won't flow through it anyway.

In this case, you won't find a current-limiting resistor - but you can still remove the LED without any side effects other than small overall current consumption reduction. note: while most (if not all) current sources have some kind of open-circuit protection, in very rare cases you may end with it pushing the drive voltage to the extreme, possibly damaging it

2) a LED receives a unlimited current, but with a limited voltage. You may find this solution in some low-end electronics OR in cases where the supply voltage is about Vd of the diode.

In this case, since the entire voltage drop happens on the diode, it's rather impossible that the current powers anything else, so you can usually safely unplug/unsolder it.

3) a LED receives a current and the current path doesn't end after the LED. It may be used as a rectifier or voltage dropper.

In this case, removing a LED with disable and/or damage the whole circuit dependent on the current. It is rare, but not entirely impossible to find. The current will probably not be limited by resistor in this case, but rather by some current driving IC, although you may find a limiting resistor in this case (note that since it actually reduces the maximum current of the whole path, it is even rarer IMO). You may consider replacing it with a series of non-LE diodes, usually 3 or 4 would be okay, depending on the exact colour of LED etc.

Also, bear in mind that the visual signal from the LED may be used by an optic receiver somewhere (computer mouse LEDs come to mind here), so you may (although unlikely) end with an appliance not sending required feedback signal, thus not working properly or at all.

Now, how to distinguish those cases? The simplest way is to unplug/unsolder the diode, check the results. In 99% of the cases everything will work as usual.

Note 1: doing a short circuit would damage solution 2), increase current consumption slightly (due to omission of diode's internal resistance) in cases 1a/b) and 3) and possibly stress/damage (although unlikely) some components in cases 1b) & 3). Doing an open circuit would disable all parts in series with the diode in case 3).

Note 2: burnt LEDs behaviour depends on the actual damage done to LED - although they usually simply increase their internal resistance heavily, so they approach open circuit after some time (like a fuse).

tl;dr in 99% of the cases simply remove the LED and don't worry about anything else. If the circuit malfunctions and the removal was done properly, either reattach the diode and cover it mechanically/visually OR use a series of non-LE diodes with Vd ~equal to Vd of your diode. YMMV.

I've seen some schematics where the LED is on a path used to power a circuit (or part of). It means if you remove the LED, the current won't flow, and the circuit won't work anymore. Look at this one: 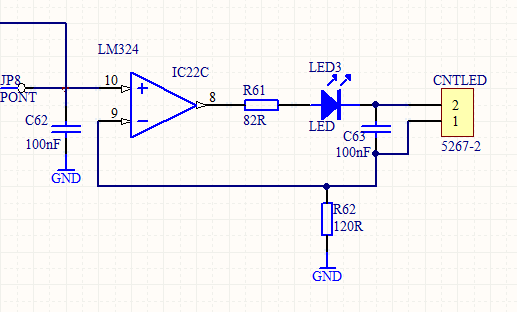 If you remove the LED, the circuit that is connected to CNTLED won't be powered by IC22C anymore. So, it depends on how it is implemented.

If you don't know the schematics, I would advise you to replace the LED by a short circuit instead of an open circuit.

Why? Because when the LED is ON, it has a small resistance (much lower than the current limiting resistor in series with it). And when the LED is OFF, the voltage across the LED is too low (under the its threshold voltage). So a short circuit wouldn't hurt in this case.

I don't know if a burnt LED is likely to be like an open circuit or a short circuit.

I've seen some circuits where the LED is an integral part of the circuit. I had a Fender guitar amp that used LEDs for their clipping the audio. LEDs can also be used in single-bipolar current source circuits.

The lowest-risk way to disable an LED is to paint it with some black paint.

A LED is connected in series with a current limiting resistor. The LED-resistor circuit is connected across the power supply in parallel with other circuits.

So removing the LED or the current limiter resistor shouldn't affect other circuit.

Better remove the LED, instead of burning it. It may get closed circuit and increase the current drawn and heat of resistors.

Only if the webcam isn't working anymore, make a closed circuit (place a jumper across LED terminals) - see vaxquis' answer. But it is unlikely in this situation, where you have a LED used for making light.

Not the answer you're looking for? Browse other questions tagged led reverse-engineering or ask your own question.

0
Changing the LED in a circuit (to change its color)

3
Is it more energy efficient to remove the ballast by using LED Tube?
0
Capacitors burning through in PSU (AC-DC) of 3W LED
0
Current Limiting Resistors for Multi-Branch LED circuit
5
How can a DC18V ~ 36V LED driver work with DC3.6V LEDs without burning them out?
4
Rewiring USB LED lights to directly use a 5V DC-DC Converter
0
Led driver - constant current or constant voltage
0
How does an IR LED turn on and how can I test to see if its not broken?
27
How can I wire a 9-position switch so that each position turns on one more LED than the one before?
1
Can I prevent a 9V LED flickering when dimmed to around 30%?