Is Bluetooth less susceptible to jamming than wifi?

I am developing a mobile peer to peer application that will probably be subjected to RF jamming, and I'm wondering if bluetooth is perhaps less susceptible to jamming than ad-hoc wifi. Bluetooth has 79 channels and wifi has 14. Also looking for any general information on the efficacy of jamming (how much jamming at what range will destroy a connection, etc) against wireless networks.

Bluetooth is less susceptible to jamming than Wi-Fi since Bluetooth uses a technology called Frequency-Hopping Spread Spectrum (FHSS). This means the signal "hops" from one channel to another, using a pseudorandom sequence known to both transmitter and receiver, 1600 times a second (every 625 µS).

In addition, Bluetooth also employs Adaptive Frequency-Hopping (AFH) which means it will only use "good" frequencies, and avoids "bad" frequencies, i.e. ones that are interfering with it.

So first of all, someone trying to jam a specific Bluetooth communication would have to be privy to its pseudorandom sequence, and then once the channel causing interference is detected, the jamming frequency would automatically avoided anyway.

Wi-Fi also operates in the 2.4 GHz band using 11 channels (in the US) spaced 5 MHz apart, from 2412 MHz to 2462 MHz. Because the bandwidth of a typical Wi-Fi signal is 20 MHz, assigning a Wi-Fi signal to a particular channel makes adjacent channels unavailable (for example, channel 6 will spill into channels 5 and 7, and a little into channels 4 and 8). So you can only get three non-interfering Wi-Fi signals in the same location: 1, 6, and 11.

Obviously, if you had a device that could jam the entire Bluetooth or Wi-Fi channels bands, such as this $5000 one, which is easier to jam is a moot point. But assuming you are trying to jam a much smaller bandwidth, since Wi-Fi uses fixed channels, it would be easier to jam Wi-Fi than Bluetooth -- since if one jammed an entire Wi-Fi channel (20 MHz), this would tie up 20 Bluetooth channels, but the AFH mechanism would allow the Bluetooth to avoid these and use channels that were not blocked.

802.11n however offers the best way to mitigate wireless interference because it operates on the 5GHz band.

It would appear the best strategy to mitigate interference is to go with Bluetooth, unless you can support 802.11n then for sure use that. 802.11n in addition to operating in a different band offers up to 7 times the data transfer ability.

Below is a screenshot from of an excellent white paper that can be found here: http://www.digikey.com/Web%20Export/Supplier%20Content/Laird_776/PDF/laird-wireless-bluetooth-wifi-coexistence.pdf?redirected=1 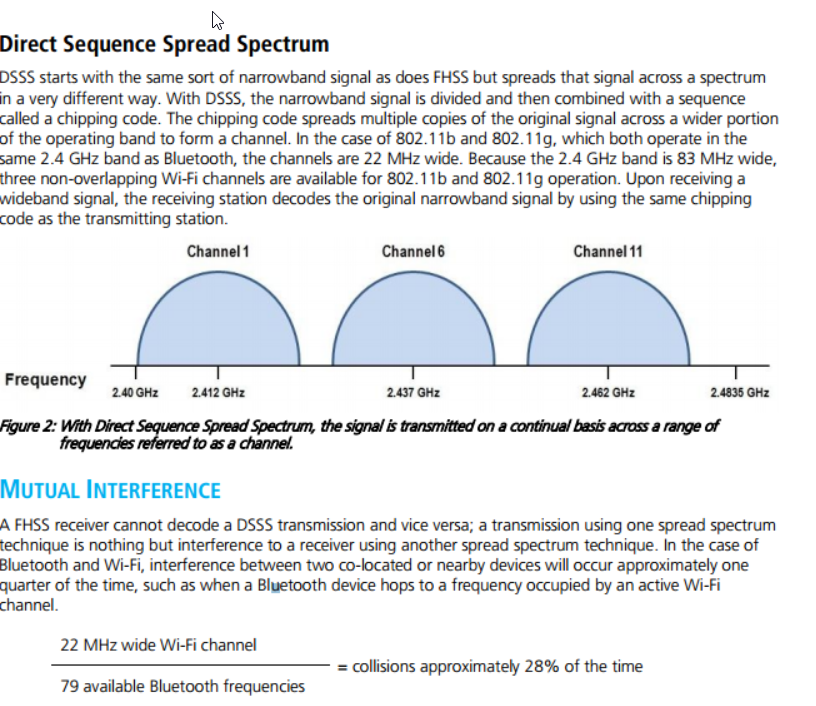 Not the answer you're looking for? Browse other questions tagged bluetooth wifi or ask your own question.