Transistor saturates no matter the size of base resistor

I have a circuit as depicted below, and after calculating the base resistor, I wanted to see when the base current would be too little to saturate the transistor. I kept increasing the resistance but even at \$560k\$ where the resistor had decreased the current to \$7.8\mu A\$, the transistor is still saturating. Shouldn't there be a base current threshold?

What I am trying

What I would like to be able to to, is to switch on and off a diode from an arduino pin. The supply voltage is 5 volts, the forward voltage drop across the diode is 3.4V and the transistor is a 2N3904.

According to this blog post, I should be able to find the base current by

And then the base resistor value by

But the size of this resistor value seems to be irrelevant. 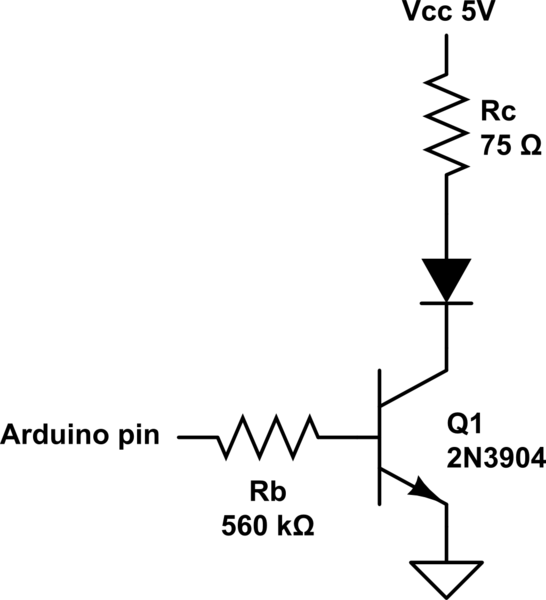 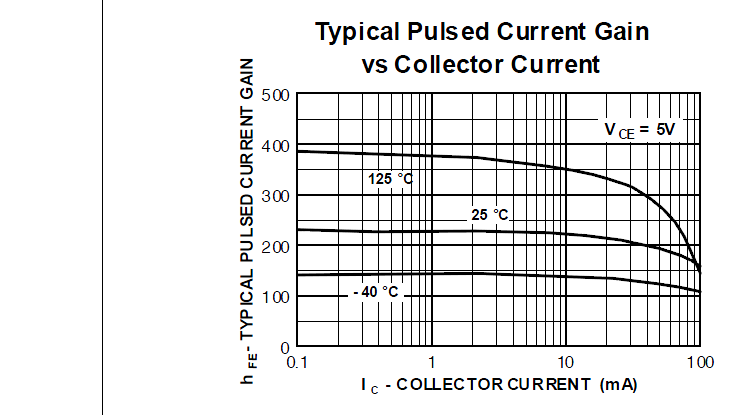 Even with 560K, that's half a mA or so, which will give plenty of light from a modern LED, but you should be able to see that it's not as bright as when a 10K resistor is used.

The reason is that you won't likely have a guaranteed hfe for the current you're using, and the hfe decreases at temperature extremes. It's still only "wasting" a few percent of the LED current, so no big deal.

To prove this to yourself, take a voltmeter and measure Vce of the transistor when it is on. If it is something like 50-100mV it is saturated. 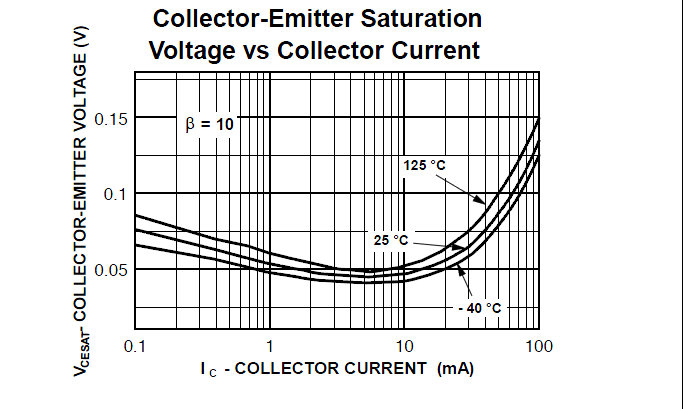 From your comment I have to say the LED turning on does not indicate saturation in this configuration. Saturation of the transistor is defined as the case when increasing the base current is not followed by a further increase in collector current (i.e. the collector current has saturated to a maximum). Actually, saturation is a state of the transistor used to characterize certain configurations, but from my experience it's implied when you speak of the current saturation. More formally, the following statement is no longer true

It depends on your particular model of LED, but some can be driven with current as low as 5mA or less and still emit light.

Also note that you are only assuming 100 as your gain coefficient for that transistor. You have cited that from the datasheet 100 is listed as the minimum. As such, it is quite likely the gain will be much higher than that.

From the data sheet, the maximum h[sub]fe[/sub] of a 3904 is 300. Using your own equation for a base resistor suggests an LED current of 2 mA, which is certainly enough to light the LED.

The second most obvious thing you're doing wrong is actually more serious: you don't seem to know what "saturation" means. Look at the second graph in Spehro's answer. You'll notice that the collector voltages involved are very low, less than .15 volts. Granted, the particular numbers involved depend on exactly which transistor you're using, and exactly what current you're interested in, but his graph is obviously appropriate for your concerns.

Once you understand what saturations means, the graph ought to suggest a very quick test to determine if your transistor really is saturated: short it out and see what happens to the LED brightness. If the 2N3904 really is saturated, it will have a voltage of about .1 volts across it, and the voltage across the LED/limit resistor will be about 4.9 volts. Shorting out the transistor will increase this to 5 volts, with a very small increase in current (and therefor a very small increase in LED brightness). In your case, you will see a large increase in brightness, and this will tell you that the transistor was not actually saturated - it was just producing small amount of light from the appropriately small current produced by your choice of base resistor.

Before you do this, though, you need to address the third (possibly) obvious problem with your setup: your LED resistor. Let us, for the moment, assume that your LED has a forward voltage of 2.5 volts. Then, with 5 volts across the LED/resistor combination, there will be 2.5 volts across the resistor. This will produce a current of 33 mA. This is not a killer all by itself, but you stated that you were expecting 20 mA. Unless you are using an LED with a forward voltage of 3.5 volts. This is certainly possible, and occurs with superbright greens and blues, but I'd have thought you'd notice the reduced brightness from your LED. If you really are using an LED with a 3.5 volt drop please disregard this comment.

Not the answer you're looking for? Browse other questions tagged transistors bjt npn saturation or ask your own question.