Heatsink or IC: how to determine root cause of overtemp?

I have a manufacturing situation where we perform a functional test on a board and we are getting frequent overtemperature failures from a BGA package with a heatsink on it. I would like to be able to determine if the cause of overtemperature is because of a bad thermal contact with the heatsink OR if the cause is from the IC itself generating more heat than we expect.

What I would like to do is to perform a test that checks the efficacy of the heat-sink to rule out the heat sink (or TIM or seating) as a problem. One way to do this is to re-apply another "known-good" heat sink and retest, but that is dependent on operator skill for repeatability, and has other manufacturing workflow problems.

Here's an idea for measuring the effectiveness of the heat sink, I'd like to get some input on whether it will be a good idea and/or what would be a better way to test this. 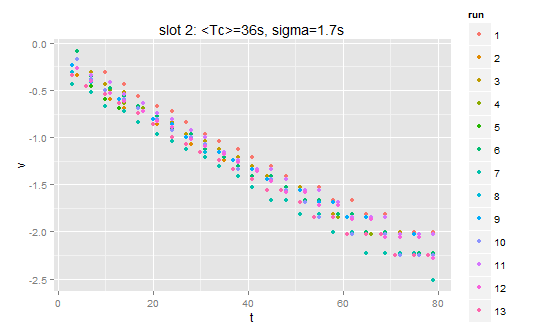 Now the question if I get a hot-running device and I measure time constant that is the same as a cool-running device, can I rule-out the heat sink and its application as a problem?

I should clarify that this is in a manufacturing context, not design (DVT). The focus is to be able to determine the cause of failures.

Maybe, maybe not, but I'd ask why you are not correlating hot chips with power supply currents, and why you're not putting a temperature sensor on the heatsink. If the thermal path from the die to the heatsink is impaired you'll get a different temperature differential between the die and the heatsink. Likewise, if the chip is drawing more current you should be able to predict the final temperature of the die based on normal thermal behavior. And measuring the heatsink temp doesn't require a dedicated contact sensor: a temporary one will do, or a non-contact IR unit should work, since the emissivity of the heat sinks should be pretty uniform.

As to why the maybes, consider the following model:

If I understand correctly, you want to rule out bad thermal contact of BGA with heat sink, right?

If so, consider attach small thermal couple to heat sink fin and bottom of PCB of BGA. As BGA heats up, some heat goes upward to heat sink and some go downard to PCB, depending on thermal resistance of each path.

The path to PCB is constant. If heatsink path has good/bad thermal contact, the rise/fall time of 2 thermal couples should show difference in rise/fall shape as well as amplitude.

Not the answer you're looking for? Browse other questions tagged temperature heatsink thermal or ask your own question.

4
TO-220 case-to-sink thermal resistance
0
how do you remove heat from a ceramic heat exchange heatsink
3
How do I interpret this thermal curve graph for my heatsink?
0
Case to heatsink thermal resistance with multiple MOSFETs
15
Is a thermally conductive pad always useful between TO220 and heat-sink?
10
Modelling heat transfer from Power LED to metal bar
0
Does heatsink transfer plate thickness matter?
10
Determine whether chassis is a suitable heatsink?
1
Three phase rectifier heatsink