I'm not very experienced with electronics and microcontroller-programming yet. I recently (accidentally) bought a couple of ATTiny13A microcontrollers, assuming I could program them using the Arduino IDE.

Because of the small amount of memory on these things, I decided to make a simple project: a reading light that automatically switches off. And I decided to use AVR Studio (6.0) instead of the Arduino IDE.

The circuit is quite simple I think. Two buttons to add half an hour of light, and another one to switch off the lights immediately. Everything is powered by a USB wall wart, supplying around 5V (5.2, I measured).

I simplified the led. In fact there are 2 leds (I planned on 3 at first) and the appropriate resistors, which is also why I added the resistor. I also left out the connections to the AVR programmer, since they are not relevant to the circuit itself. 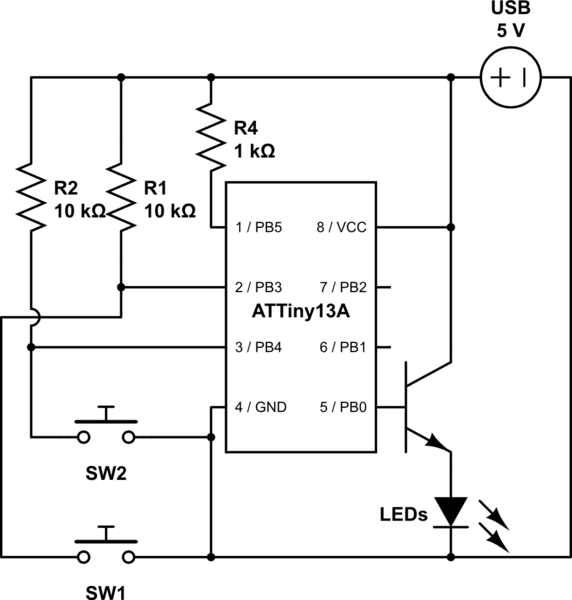 The light works as it is supposed to. It burns for 3 seconds when I plug it in. I can turn it on and off. And when I turn it on, it burns for about half an hour before switching off by itself. If I know beforehand that I want to have more than half an hour of light, I can press the button multiple times, to get N times half an hour.

Now the problem is, it seems to be quite sensitive to peaks or drops. I got a wall wart with two connections. When the night light is plugged in in one of them, and I plug my phone into the other, the night light resets, burning for three seconds and then switching off. This also happens most of the time when I unplug the phone. It doesn't matter whether the light was switched on or off when I do.

So my main question is, how do I solve these resets? I'm open to other advice as well.

I'll paste the program here for reference as well. I think it's not relevant, but I tried to use interrupts and have the controller in sleep mode most of the time, so I'll post it anyway, just in case it contains vital information.

Most proberbly you have a voltage drop when connecting or disconnecting the phone. You should always add some capacitance between VCC and GND to make the circuit less prone to voltage drops. Try to add two capacitors in parallel: 10uF (electrolytic) and 100nF (ceramic or foil). Mind the polarity of the electrolytic one! If this does not help, try to add more caps in parallel.

And, yes the transistor should have at least a 10 ohm base resistor.

Edit: For Atmel MCUs, the correct capacitor values can be found in the datasheet or reference designs.

But: Maybe even more important are the parasitics (ESR, equivalent series resistance). Make sure to place a lower-ESR cap (ceramic) as close as possible to the MCU's supply pins. In general, the larger a cap the more ESR it will have. 100nF is a value commonly used close to the supply pins (chip level), whereas 10uF or 4.7uF is commonly used to buffer entire circuit parts (subcircuit level).

For your circuit it is certainly sufficient to add two 100nF in parallel to the power pins.

I'd start with 100nF ceramic cap as close to the Vcc and GND pins as possible. This is a general recommendation for Atmel uC to deal with smaller voltage drops and spikes.

As the second step, add that electrolytic one somewhere on the power supply line (don't have to be very close to the chip). You may start with something in 10-100uF range and choose one appropriate for the quality of your wall wart power supply. This is purely experimental.

Generally speaking, the bigger cap you add, the more resistant your circuit will be to power losses but longer will be the switching off time when you pull out the plug.

Tip: 100uF, 47uF and similar caps can be scavenged for free from PC mainboards, TV sets and other desktop electronics.

Please read up on POR (Power On Reset) circuits for Atmel based CPUs, page 6

To protect the RESET line from further noise, connect a capacitor from the RESET pin to ground. This is not directly required since the AVR internally have a low-pass filter to eliminate spikes and noise that could cause reset. Using an extra capacitor is an additional protection. However, such extra capacitor cannot be used when DebugWIRE or PDI is used.

Not the answer you're looking for? Browse other questions tagged microcontroller power-supply attiny reset or ask your own question.

13
Waking Up From Deep Sleep Modes
5
Attiny85 hardware interrupt unreliable, 433 MHz remote
35
Why does my AVR reset when I call wdt_disable() to try to turn the watchdog timer off?
0
MSP430FR4133 timer interrupt
2
Missed Interrupt Problem with Attiny85
3
Microcontroller hangs while switching off
1
8051 Stop Mode -- External Interrupt Polling?
3
Latching Soft ON/OFF Button
0
How to exit from an interrupt's loop for MSP430