The extent of what I DO know is the following:

What I don't understand:

If you can ELI5, you'll be my hero. Currently I've only studied passive components and op amps. My knowledge of transistors (particularly the properties of real transistors) is essentially nonexistent. Thanks in advance for your help!

The log circuit (or diode circuit) is for the triangle to sine converter- distorting the triangle waves so they like more sine-y. They have nothing to do with making it oscillate.

This is the core building block at work is a slightly more complex version of this: 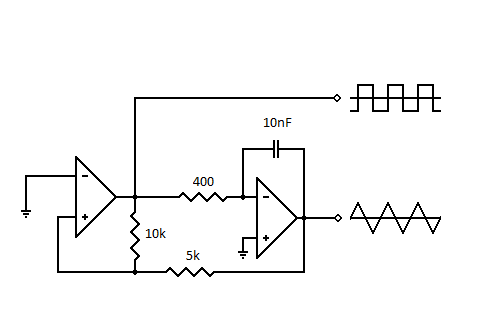 The positive feedback on the comparator in the above circuit establishes the hysteresis (which, in turn, determines the amplitude of the triangle waves). The square waves are always rail-to-rail (or as close as the comparator can manage).

In the case of the above circuit, the trigger points will be +/- 2/3 of the supply voltages (assuming the comparator is rail-to-rail output). You can easily see that by looking at what voltage at the op-amp output would be required to make the comparator input 0V with the comparator at either rail. So it would generate a triangle wave of +/-6.6V with a +/-10V supply.

The app note circuit uses an LM329 6.9V buried zener reference diode (rather than the power supply rails) to determine the trigger points and some diodes to correct for the drops involved in steering the current to and from the reference diode because amplitude control is very important (the triangle wave isn't all that good for shaping to sine waves- it it pointy at the top and sine waves are very flat at the top). The square wave measured at the 10K resistor connected to the 10M pot should be +/-6.90V.

The JFET arrangement below: 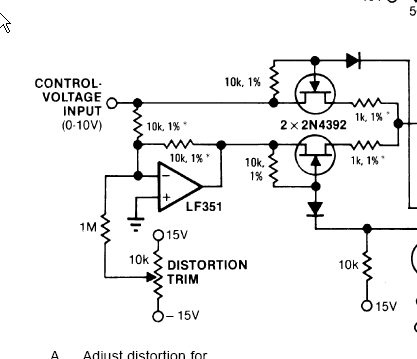 It has two blocks- there is an inverting amplifier that creates -Vin (the LF351 and the two 1% resistor with the zero trim), and two analog switches (the JFETs) which act like a SPDT switch.

The input is Vin, and the output of the LF351 is -Vin. Both "DC" voltages-they change only when Vin (Control Voltage Input) changes.

So instead of taking the comparator output of +/-6.9V fixed (which yields a fixed frequency) they take input voltage +Vin or -Vin. Since the integration is to a fixed voltage, the frequency will be proportional to the input voltage (a linear VCO).

You could replace the JFETs with a CMOS analog switch and get a similar result with fewer components (and loading the input less- the JFET design has puts a pulsating voltage through 10K series onto the input).

Not the answer you're looking for? Browse other questions tagged transistors oscillator fet vco or ask your own question.