Does a Breadboard Compatible DC Barrel Jack Have to be Connected to Positive and Ground to Receive Power from an Outlet?

I am using an Arduino to control an electric lock strike but I don't know how to power the lock with sufficient power. To control the lock from the Arduino, I am using a TIP31 transistor (It is NPN). The transistor will be getting the signal from pin 9 on the arduino and will connect to the ground wire of the lock strike. Since I will only need the DC barrel jack for positive (since the ground wire of the strike will be connected to pin 9 via transistor), I need to know whether this barrel jack will draw power from a power source even though it will not be connected to ground.

Below is a basic schematic of how everything will be connected. V1 is the Arduino power supply, either 5V usb, or 7V to 12V dc barrel jack. V2 is the Lock Strike power supply. It will vary based on your lock strike, probably 12V to 24V. Regardless of the combination, the red wire below connects the grounds of both power supplies together (the DC, barrel jack side, not the AC wall side!). Just connect any ground connection on the Arduino to the emitter of the TIP31/ground of the lock strike power supply. 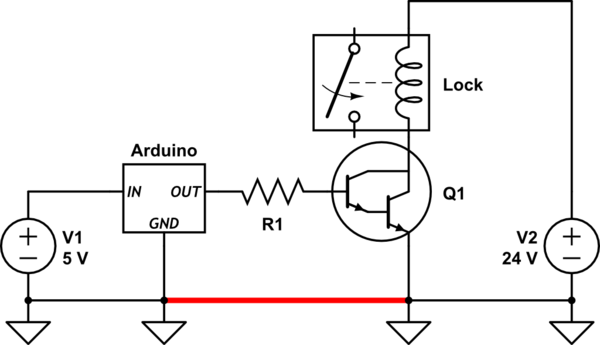 You need a return path, so ground needs to be connected somewhere. On the barrel jack? Not necessarily, but you need to get ground to the circuit. I suppose the Arduino has it's own separate power source with it's own ground, but even in this case, you need to tie the two grounds together or you'll see issues. When you have a 12V source, it is 12V above a reference voltage or ground. If you have unconnected grounds on two separate sources, their references won't be the same, so what's supposed to be 12V might not be.

Not the answer you're looking for? Browse other questions tagged power dc breadboard or ask your own question.

0
Using a transistor as a switch
1
How should I wire up ground when using an ATX power supply to power an Arduino and several LED strips which in return are controlled by the Arduino?
8
9-volt battery connected to transistor controlling LEDs with Arduino
0
Two power supplies for an Arduino Mega - How to handle Vin pin?
0
How to check if pin is floating or connected to ground?
0
LCD Backlight Control Circuit
0
Transistor for USB Hub power control