Super Noob EE question:
Here is my quick draw-up of my SPST switch circuit schematic.
I know I probably did not do this right, but if it gets the idea across, then thats good enough for me atm. 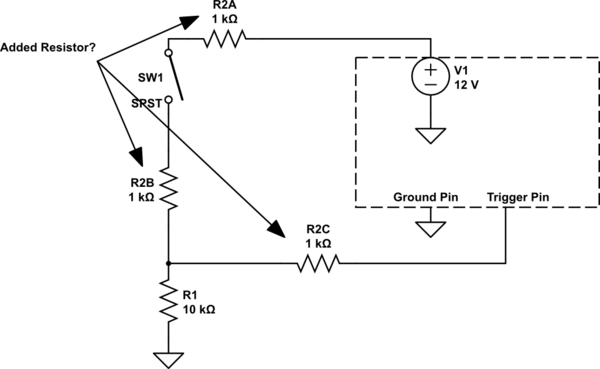 The right boxed section is a connector where I showed the power pin (V1 @ 12V), trigger pin, and ground pin (chassis).

The left side is a (hopefully correctly drawn) pull-down resistor setup with SPST switch (SW1) and standard 10k resistor (R1).
Does this 10k resistor (R1) act as a current limiter in this circuit?
On the top of that, I added a 1k resistor (R2A OR R2B OR R2C) in series with the SPST switch (SW1) because i was wondering if it could be used as a "current limiting resistor".
I was also wondering if it matters where the resistor goes, whether its before or after the switch, shown by R2A & R2B & R2C.
What are the differences (if any) between positions R2B and R2C?

Can it "make sense" at all to put in this R2 resistor in this circuit? What uses can it have?

Yes, in your circuit, the resistors form a voltage divider when the switch is closed, assuming that the input impedance (how much current flows into it) of the Trigger pin is much higher than the value of the resistors.

Moving the resistor R2 before or after the switch could in theory also have effects. For example, if V1 is sensitive to voltage transients, then putting the resistor between the switch and V1 could help mitigate any static discharge that happens when someone physically touches the switch, at least compared to having the switch connected directly V1 and using resistor in position B2. Similarly, if you were worried about, say, a screwdriver falling into the switch and shorting the contacts to ground, then adding resistor R2 between the switch and V1 could limit the current in flowing in that case and prevent the short from blowing out the power supply or the connecting wires.

None of these theoretical effects probably matter in your circuit, but in practice they can be a real consideration. Check out this question (of mine!) where the location of the resistor is important for similar reasons...

What is the purpose of adding a 300 ohm to 500 ohm resistor on the Neopixel data line?

Also, I think this becomes a voltage divider right? where the voltage will be 10/11 * 12V at the trigger pin when the switch is closed?

It does become a voltage divider, however it divides by a ratio of 10/12 ( you forgot the other 1k resistor).

If I didnt have resistor R2, then what voltage would the trigger pin see with the switch closed? 12V?

The voltage would be whatever V1 is at that instant. If its a sinusoid, the voltage on your trigger would be the same. If its DC, then you'll see 12V.

Can it "make sense" at all to put in this R2 resistor in this circuit? What uses can it have?

If all you are trying to do is set your trigger off with 12V when the switch closes, then you dont need R2 (A and B). The 10K pulldown is all you need.