I am trying to make ecg electrodes with capacitive coupling. Since my capacitor is only about 10 pF at max and I have to have as low cut-off frequncy as possible, I came up with a circuit like this.
My question is: Could it work? Bias current of the op-amp is 5 pA. 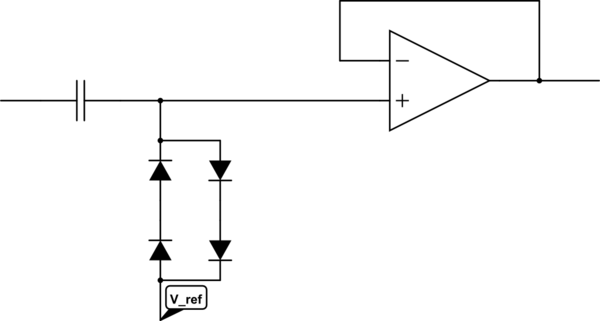 Also, in the case of EEG you would not want to decouple in the first stage amplifier since the signal is 10uv to start with. But in ECoG you can probably get away with it. Not suggested though.

I'm not at full speed for capacitive coupled trodes, but your positive terminal of your op amp can't source or sink current, so you'll need a resistive path to ground there.

Not the answer you're looking for? Browse other questions tagged capacitor diodes capacitive biopotential coupling or ask your own question.

0
op-amp and capacitor 2
1
Discharge of a load capacitor through a cascode
2
Help in finding capacitor and resistor value for discharging circuit
1
How to size coupling and bypass capacitor for simple BJT CE stage
0
Relay - capacitive Load ( 2.5 F )
2
Why power factor correction for Capacitive load is more difficult?
1
Adding a DC bias to an AC signal for amplification and measurement
5
Understanding charge and discharge of a capacitor
2
STM32F0 Capacitive Touch Not Detecting