Why does a radio still work inside a metal box?

I've put a small battery powered commercial radio inside a Quality Street tin. The tin is all metal with rolled joints and the lid is a tight fit. I'd be willing to bet that there are no holes greater than 0.1mm around the lid's closure. It's a fairly common Sony ICFS22 FM/AM Pocket Radio with a telescopic aerial, and the tin is approximately 300mm in diameter.

Why does the radio work when receiving an AM station (1 MHz), but only produces static when switched to FM (100 MHz)?

The tin IS magnetic, attracting a magnet well

The walls are 0.25mm thick (including paint)

The inside of the tin is unpainted

I grounded the tin to the earth wire from a UK mains electrical socket, and repeated the reception test. I filed off the paint where the wire touched the tin. Results:-

FM: Total static. No discernible change with /without earth wire.

AM: Tinny but recognisable radio station. No, repeat no discernible change in pitch or volume with /without earth wire. Surprised.

The tin with the ground wire... 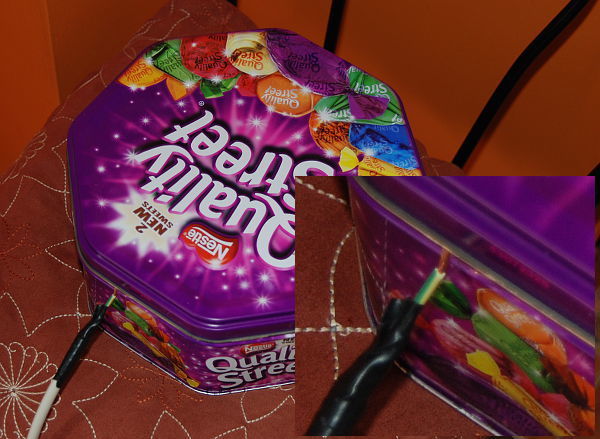 Normally AM radios use a magnetic loop (ferrite rod antenna) for picking up the H field part of the electromagnetic wave they are trying to receive: - 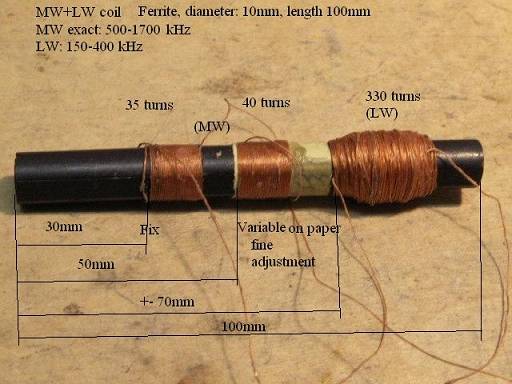 A closed box of steel isn't going to substantially prevent the H field penetrating inside. Think about the fact that you can extend the range of a magnet by putting some iron on one of the poles. If it were mu metal (rather than steel) the eddy currents set up might start to substantially reduce the H field of course.

An FM radio probably uses a short dipole (to be able to place it inside the chocolate box tin) and significantly this receives the electric field part of the EM wave so, the box is acting like a faraday cage and blocking the signal. A short dipole is also not going to naturally pick up anything like the sort of signal needed - typically a quarter wave at 100MHz is 0.75 metres and if choc boxes were that sort of size I'd be impressed!

Having said all of that, my answer is only justifying the facts as stated in the question. If someone asked what would happen if a radio were placed inside a choc box tin I'd still mention the H field and E field reception stuff but, intuitively, I wouldn't be able to make a call on it one way or the other.

It's because of the thickness and the type of metal, as well as the signal type.

EDIT: NOTE: Upon further thought it needs to be stated here that various different metals have very excitocally different noise rejection curves, so generally copper or aliminium may not be better in all cases, they may even be worse. The central point to the answer remains largely in tact, though.

If your tin were made of copper or aluminium it's possible AM would have been reduced enough to be unusable, but the tin is made of a specific type of alloy that may or may not be working as well as a shield. (As per the comments, it turns out it may be better, but that doesn't change the remaining point:)

The higher the wave frequency is, the thinner the metal sheet can be to keep it out/reflect it. This comes from EM-field theory, but within usable parameters it is generally true that a thinner sheet of metal will work better for high frequencies than low frequencies. The thickness then defines at what frequency you "stop hearing" anything. There are some exceptions for hair-thin sheets and certain types of waves or frequencies, but you can ignore those for now.

Apart from that, an AM signal is a wave that is stronger and weaker in the frequency of the sound. AM stands for Amplitude Modulated/Modulation. So the signal gets weaker and stronger to identify the audio wave. Because that system is very sensitive to the signal strength to supply audio, there's an auto-gain control on it, that tries to amplify it.

So there is some signal left, because the tin is just about thin enough to let some AM frequencies through, and then the Auto-Gain tries to make something of it by amplifying it till it makes some semblance of the original audio.

As an experiment you could try wrapping the radio (in a plastic bag, so you can't accidentally cheat by modifying the antenna) in thin tinfoil, or other thicker and thinner metals and see which waves stop working when.

Not the answer you're looking for? Browse other questions tagged shielding or ask your own question.

9
Why does an XLR connector use 3 pins instead of two
3
How much shielding does an ungrounded metal box provide?
1
How does shielding work in VGA cables?
8
Why does my GPS and Wi-Fi work inside a sealed copper clad box?
2
What does metal to metal bottoming mean?
2
If a PEC surface completely reflects an EM wave, why doesn't an ungrounded shield work?
0
How does the shield of a coaxial cable work?
1
Why do (magnetic) absorber sheets work?