Why does an increase in capacitor ESR make the capacitor hotter?

According to what I have read online, if a capacitor's ESR increases, the capacitor temperature will also increase and this has me left a little confused.

This means that it is equivalent to a resistor being fed from a constant current generator. In that case the power dissipated in the resistor will be proportional to the value of the resistance - P = I^2*R where I is constant. 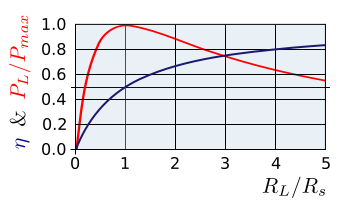 I am assuming that voltage source that you are modeling is perfect (i.e. it presents negligible internal resistance). Pmax point occurs at RS = RL, as I've mentioned before, and since you are experimenting with ESRs being far from negligible RS you are, in fact, far away on the right site of this chart where the function value (which is in fact proportional to the power being dissipated at your load) is decreasing with increasing RS. That's why you are observing a decrease in power with an increase in ESR.

Try to experiment with voltage sources that have a similar resistance to the ESR. If you set your source resistance to, let's say 100 ohm and your ESR to 90 ohm and then to 100 ohm, you'll notice that the ESR will dissipate more power when equal to 100 ohm.

Not the answer you're looking for? Browse other questions tagged capacitor esr or ask your own question.

2
How does the values of the capacitor affect the filter circuit?
6
Modelling Capacitor Leakage
1
ESR and CSR of Capacitor
2
ESR of Ceramic Capacitor
0
electronics testing capacitors
0
Using a single resistor for constant current load
3
How does a capacitor resist changes in voltage?
2
How to determine the decoupling capacitor values for the power bus of an RF device?
1
Bulk Capacitor Ripple Current as a Function of Capacitance
3
Why does this capacitor shorten the clock pulse?