I'm interested in learning how antennas work and why they are required to be a particular length in order to receive/transmit. I've learned that the length is choose to be a quarter wavelength of the expected frequency.

Is this a strict rule? What if the antenna is slightly shorter, or what if its any length longer than a quarter wavelength?

Is there an easy way to visualize whats occurring when the length is longer/shorter than this?

Oh, also this this requirement the same for both the receiver & transmitter? Do they need to be oriented/aligned (the receiver with respect to the transmitter)?

Any length will radiate any frequency, just that certain frequencies require a lot less voltage or current to do so.

At the right fraction (and multiples thereof) of the wavelengths, resonance happens. This means charges slosh around a lot with a little push. Think of a bathtub half filled with water. You can put your hand in the middle and move it a little back and forth end to end. At the right frequency, you can get the water sloshing back and forth much more than the little motion you are driving it with by your hand. If you go a little higher or lower in frequency, this stops happening. Most resonant systems have a relatively narrow frequency range at which they resonate. The tightness of this frequency range is quantified with something called the Q factor, with higher numbers being tighter.

Resonance results in much higher currents or voltages in the antenna than what you are feeding it with. Without this resonance, you'd need inconveniently high voltages or currents to ultimately radiate the same power.

Near the resonant frequency, the antenna will also look resistive. Think about how weird that actually is. You're driving just a piece of wire, or a loop of wire. You'd expect that to look like a open circuit or a short circuit. For the open piece of wire, it takes high voltages to get much of any current, and then that current will be largely out of phase with the voltage, so the power drawn from what is driving it will be close to zero.

At the resistive frequency of the antenna, the voltage and current are in phase, so real power is being delivered to the antenna, which it then radiates. A simple dipole antenna will look like a 75 Ω resistor at the right frequency. Various antenna geometries have different characteristic impedances. A folded dipole looks like a 300 Ω resistor, for example.

Since this characteristic relies on resonance, you can't deviate far from the optimum frequency and still get the desirable characteristics. There are some antenna designs that try to work over a wider frequency band, such as fractal antennas. Others have various elements, each a little different in size so that one of them is resonant. There are various techniques for creating broad band antennas, but these are all compromises that trade off wide band with other characteristics.

It is a basic tenant of physics that any antenna works the same receiving or transmitting. So yes, a antenna designed to transmit at a particular frequency will also receive well at that frequency. You can't prevent this if you wanted to.

This is in response to a comment about spherical radiation pattern not being possible. It is. I've seen it. What you can't do is specify both the radiation pattern and the polarization over the whole pattern in the general case.

We used such antennas in a system for tracking active RFID tags. Each tag had a battery, and emitted a RF burst carrying information every 10 seconds. These tags could be arbitrarily attached to things, and there was no way to get them to be oriented in a particular way.

The receivers were part of the fixed installation at known places. We got rough tag locations by measuring the signal strength at multiple receivers.

Our RF guru came up with, after lots of simulation and experimentation, a 3D folded shape that radiated about the same power in all directions. It's not really that simple, but imagine the antenna having a straight piece of wire somewhere that is broadside to each of the 3 orthagonal directions. Each straight segment has roughly a dipole radiation pattern. Add three orthogonal ones together, and you get a spherical pattern.

With the tags radiating in all directions, but with arbitrary polarization, we needed the receiving antennas to receive all polarization angles equally. Since the receivers were hung on walls in a building, and we wanted them to pick up tags on the same floor, the ideal radiation pattern was horizontal but not vertical. Fortunately, that combination is possible.

Imagine a regular dipole oriented vertically. It has a horizontal radiation pattern with nulls straight up and down. This is the classic "donut" shape when log signal strength is plotted as a function of direction in 3D. The polarization is vertical.

Now imagine a loop antenna in the horizontal plane. It has the same radiation pattern as the dipole, but with horizontal polarization.

It turns out one bi-product of this design is high Q, which is great as long as you get the center frequency right. We had a special jig in production that would measure the resonant frequency and direct the techs to clip just a mm or two from one of the ends to adjust it.

Just a small starter on length of the antenna. An antenna is made better if it is resonant tuned to a particular area of the spectrum and length is a key factor in making it resonate. Think about a ruler on the edge of a desk and how it resonates when you flick it. The shorter the ruler the higher pitch the sound it makes. Not having it at resonance does not mean it doesn't work but it does mean it doesn't work as effectively and it can present quite a complex impedance to a power amp when transmitting.

The basic antenna is in fact a dipole and it is half a wavelength long and produces (in reception) a balanced output. A balanced signal is required when using it as a transmit antenna. A bastardization of the dipole is the quarter wave monopole and this is what I think you are alluding to in your question.

This is quite comprehensive thematics, but I will say just few facts:
1. The active length of antenna is just little bigger than its physical length, so you wont find the exact match between lambda and physical length.
2. A quarter lambda antenna acts like dipole antenna in vertical polarization. The second qarter of antenna is the ground (earth) where the ground acts like a mirror, therefore the quarter lambda shall be installed on ground or on large conductive surface, the polarization is always vertical.

In literature look for SWR and standing waves and what happens if the antenna is not perfectly matched (different length).

Transmit antennas do not need to be self-resonant in order to efficiently radiate nearly all of the r-f power that flows along their conducting surface(s).

For a set of examples, the base-fed monopole (Marconi) antennas shown below have directivities that increase with electrical height, yet none of those configurations is self-resonant.

If a low-loss matching network is used at the feedpoint of each of those configurations, the antenna system can be resonated, and almost all of the power that is delivered to it by a transmission line from the source (transmitter) will be radiated. This is a common and proven practice used by licensed AM broadcast stations.

The higher directivities for the taller radiators means that they will produce higher peak field intensities for the same amount of Z-matched r-f power at their feedpoint terminals. 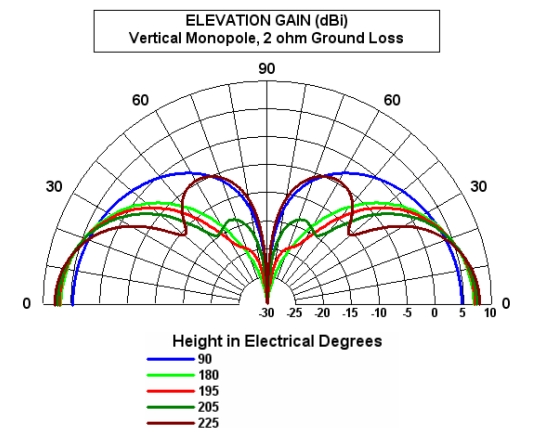 6
MIMO: How Can Two Antennas So Close Together Receive Different Signals?
2
Building a UHF FM audio transmitter
0
Using chip antennas over a 50 foot distance
0
Antenna Diversity: two Yagi antennas to the Rx and Rx/Tx u.fl-male points on the wifi-NIC?
2
basic RF transission in noisy environment
3
Can 900MHz and 2.45GHz Antennas be differentiated by shape?
1
Why are two different length antenna sold with this 433MHz module?
4
Does the antenna length differ between transmitter and receiver?