Is it possible to phase shift a single harmonic rank without shifting the rest of the distored signal?

Is it possible to phase shift the 3rd harmonic (for example) without shifting the rest of the signal ? If yes, how and using what ?

basically what they did, is taking under consideration the phases of the harmonics :

In a systems with multi harmonic sources, the injected harmonic current from each source add vectorally. Therefore, it is crucial to study the impact of each harmonic source phase angle on the total harmonic distortion.

Here is the network Model they used : 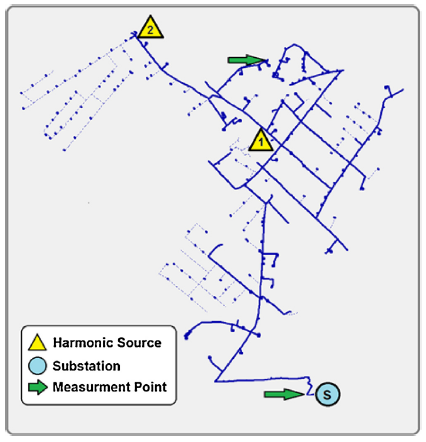 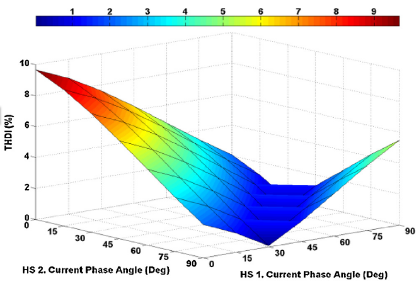 Now, i saw that for some combination of Phases (ex :75° to Source 2 & 45° to Source 1) the THD is reduced because the harmonics canceled each other, without any harmonics mitigation technique, so i was wondering if it is possible to create an algorithm to compute the right combination of phases for N harmonics sources in a way they cancel each other and than apply those phases to each harmonics in each source, to obtain a minimum THD without any effort of mitigation. of course in the real life not all harmonics have the same phase, so the phase shifting must be different for each harmonics rank, and this is why i asked my question at the first place

Conceptually, what you seem to be proposing seems to be something like passing the entire current of a branch of the grid through a system that extracts specific harmonic currents and injects them back into the grid with a different phase relationship to the fundamental to cancel harmonics originating in another branch. Passing all of the current of a branch through any system would seem to be less efficient than some kind of active or passive filter that would handle only one or several specific harmonics.

A similar concept would be to have the major harmonic generating sources vary their waveform creation strategy in a way that would tend to cancel each other. I found a paper related to that, but I made a mistake in trying to save it. I will try to find it again and post a link later.

Added reference information re above:

Armstrong, Matthew; Atkinson, D.J.; Johnson, C.M.; Abeyasekera, T.D., "Low order harmonic cancellation in a grid connected multiple inverter system via current control parameter randomization," in Power Electronics, IEEE Transactions on , vol.20, no.4, pp.885-892, July 2005 doi: 10.1109/TPEL.2005.850949 Abstract: In grid connected multiple inverter systems, it is normal to synchronize the output current of each inverter to the common network voltage. Any current controller deficiencies, which result in low order harmonics, are also synchronized to the common network voltage. As a result the harmonics produced by individual converters show a high degree of correlation and tend to be additive. Each controller can be tuned to achieve a different harmonic profile so that harmonic cancellation can take place in the overall system, thus reducing the net current total harmonic distortion level. However, inter-inverter communication is required. This paper presents experimental results demonstrating an alternative approach, which is to arrange for the tuning within each inverter to be adjusted automatically with a random component. This results in a harmonic output spectrum that varies with time, but is uncorrelated with the harmonic spectrum of any other inverter in the system. The net harmonics from all the inverters undergo a degree of cancellation and the overall system yields a net improvement in power quality. Link

Here is a newer article by some of the same authors as the article you linked:

Here is an article about measuring harmonics including phase information:

You could use a filter tuned to 180Hz that feeds into a phase shift, then have that feed through another 180Hz filter back into the rest of the signals. That way only the 180Hz portion makes it into the phase shifter.

Also as seen in comments below, a 180Hz notch filter would bee needed to filter out the 180Hz from the un-shifted portions of the signal.

Since the phases are shifted by 120 degrees, the first solution is to install a 3 column transformer. The 3rd order harmonics are all in phase, because 120*3=360, thus the flux from 3rd harmonics will collide and cancel in the 3 column transformer. Now you would need a second ring transformer with all 3 phases + excitation coil, where fluxes from 3 phase system will cancel each other while you can use a synchro generator with phase locked loop to inject the 3rd harmonics back into grid with different phase angle.

Now if you build a big toroid transformer with 3 windings + 1 extra winding, you don't have to insert the transformer in between, only attach parallel. You will get that the flux of 1st + 5th +7th will cancell out, the only remaining flux in transformer you get is the 3rd, and you get the secondar voltage in that extra winding. Now make a short circuit or add a resistor, the 3rd harmonics will be cancelled out at that specific point and you'll get a standing wave.

Further you can use a fluxgate, and feed the extra winding with current source such that flux in the transforme is cancelled.

Electronically inject a 3rd harmonic 180 deg. out of phase of equal magnitude to cancel the original. Then inject the 3rd at the angle and magnitude desired. This will have to be done with brute force, i.e., a fairly powerful generating device since the grids are "stiff". The generator logic circuitry must also detect the phase of the fundamental as a datum point (obviously).

Not the answer you're looking for? Browse other questions tagged harmonics phase-shift or ask your own question.

2
What is the best approach for reducing harmonic distortion?
5
Harmonics are bad... But how bad?
3
Calculating the gain and phase shift of a phase shifting circuit
2
Line to phase voltage with harmonics
0
LCR circuit with squarewave input: Why does the output take a decreasing amplitude through each cycle?
1
How to electrically shift the phase of a signal?
5
50/60Hz Noise Harmonics
17
Why harmonic distortion and not at other frequencies?