I need to modify the schematic below to accommodate for the change from 6 5mm IR Leds to a single 5w LED star.

Since this is a strobe I want to be running it at ~Pulse Current. My power supply will be a cigarette lighter outlet in a vehicle, which I believe gives out around 13.5v. 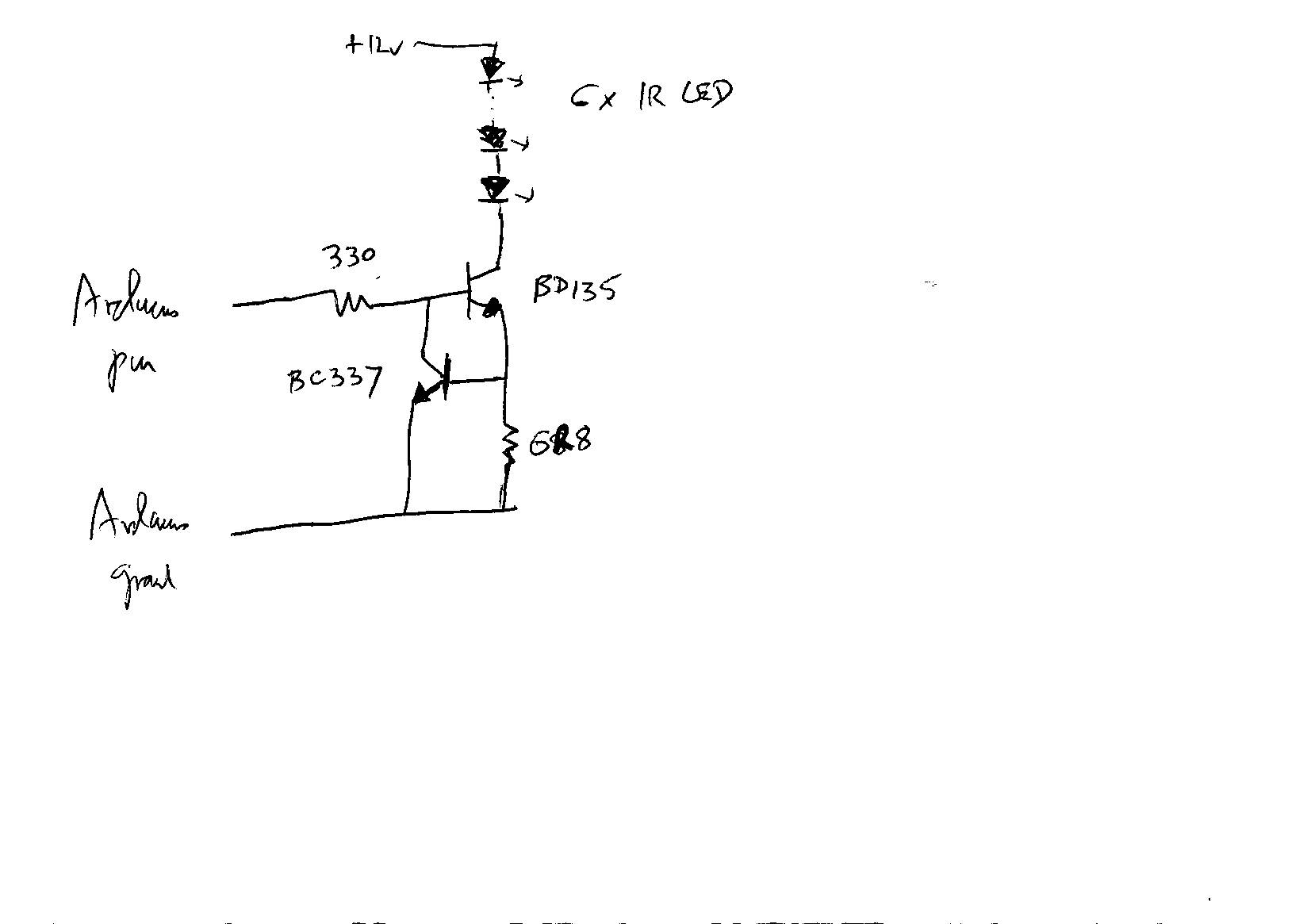 Some of your specs are contradictory, but I take it you want to run 2A thru a IR LED for short periods of time controlled by a 5V digital logic signal, and you have 12V car power available for this circuit. I'm also assuming this thing doesn't need to be super accurate.

Here is a simple solution, with some cautions:

This uses the inherent property of bipolar transistors where the collector current is largely independent of the collector voltage. When the base of Q1 is raised to a particular voltage, the emitter will follow about 700 mV less. This puts a fixed voltage on R1, which therefore causes a fixed current to flow thru it per Ohm's law. Most of that current will flow thru the collector, so Q1 then acts as a voltage controlled current sink. The TIP41 is a medium power transistor and has a minimum current gain of 15 in this case. That means 1/16 of the R1 current comes from the base and 15/16 of it from the collector.

You want about 2A to flow thru the LED when on, so that means the base current needs to be up to 135 mA. That's too much to expect a normal digital output to supply, so that's why Q2 is there. It provides a additional current gain of at least 50, so now the digital signal only has to source 3 mA or so, which most digital outputs can be expected to handle. Q2 and Q1 together form what is called a "darlington pair". Together they act like a high gain transistor, but with twice the B-E drop of a single one.

Now for the cautions. This circuit is only intended for short pulses with low average duty cycle. Significant power will be dissipated when the LED is on. With a 12V source and considering the 2A that will flow, 24W have to go somewhere. A little (3.6W or so) goes to driving the LED as intended, about twice that (7.2W or so) will heat R1, and most of the rest (13W or so) will heat up Q1. This is not a sustainable condition, particularly for Q1.

All these parts should be able to handle that power for short bursts at a time, but the average must be significantly less. If the bursts are short and the duty cycle low (10% or less), then probably nothing further needs to be done.

If you need to tolerate more power, then the first thing to do is to relieve the stress on Q1 since that's where most of the power is going. Adding a heat sink to Q1 is one approach, and reducing the voltage accross it when the 2A is flowing is another. At 12V total, 3.6V accross R1, and 1.8V accross D1, that leaves 6.6V left for Q1 to drop. Q1 in this darlington configuration needs at least 1V, better leave 1.5V, for it to do its job. That means there is about 5V extra that could be dropped by a resistor in series with the LED without effecting the operation of the circuit. That means you could add up to 2.5Ω in series with the LED to take a good fraction of the heat that Q1 would otherwise have to dissipate. The same power will still be wasted and converted to heat, but generally this is easier and cheaper to deal with in resistors than in active parts like the Q1 transistor.

Datasheet of all parts used is always helpful. Saves others having to chase them down N times.

The BD135 is "time honoured", does not have the required current rating and is not ij any case an overly nice device. Use a MOSFET such as this Fairchild RFD14N05LSM - in stock at Digikey for under $US1. 14A, 50V, logic level gate (3V enough here, more good). TO220 or DPak.

Ipeak is now 2A.
Replace 6r8 in emitter with a resistor that will drop about 0.6V at 2A to turn on BC337 and limit current.

Circuit will work as is with MOSFET in place of BD135.

This circuit is not good at precisely controlling peak FET current. I'd tend to use a comparator or opamp doing an essentially identical role. Control will be much more defined.

Vin is pulsed to relevant level to turn on LED.
Level can be set by dividing processor in voltage which would still be more accurate than transisor circuit, or by clamping drive signal at designed level. 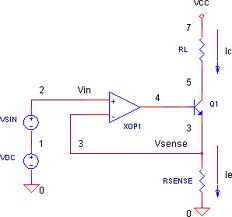 Not the answer you're looking for? Browse other questions tagged arduino led infrared or ask your own question.