What kind of component lets me measure distance in a small space?

I have bought a beautiful old radio, which I'm trying to convert into a DAB radio (there's no future for FM radio in my country).

Of course I could just use a DAB receiver, plug it into the old radio's speakers, and be done, but there's no fun in that. Instead, I want to be able to operate the old radio, turning its knobs and pressing its buttons. So that when I turn the tuning knob, I'm switching between DAB stations instead of tuning between FM frequencies.

The first step (at which I'm stuck) is to translate the position of the tuning knob (A) into a digital value I can use to control a DAB receiver. I'm a programmer, with only limited experience in electronics, so I'm not sure how to best accomplish this. 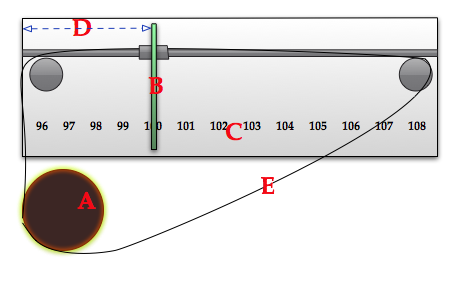 Originally, the radio displays the frequency with a vertical bar (B) that travels over a frequency band (C). My idea is to attach something to that bar (or to the carriage that the bar is attached to), and measure the distance (D) between the bar (B) and the inside wall of the radio. If I could do that with some electronic component, I could get a signal that I could translate into a number that again could be used to select a DAB station.

The problem is that space inside the radio is limited.

This image shows a horisontal, round bar on which the frequency bar moves along. When the radio is fully assembled, the speakers are located on top of this, leaving about 1cm space between the horisontal bar and the speakers. It must also go clear of two lightbulbs (for illuminating the frequency scale).

The frequency bar is sandwiched between the glass dial scale, and a metal plate. Here's what it looks like from above.

Here's the back of the tuning knob and its shaft. As can be seen, there's not too much space here. The knob is dual shaft - the outer ring is the speaker selector.

Here is a birds-eye view of the interiors, when taken out of the enclosing cabinet. And a close-up of the variable capacitor's shaft, as per Transistor's request.

Oh, and here's the schematics, if there are any Norwegian speaking radio enthusiasts out there.

Here are the options I have investigated/tried so far:

What other options do I have?

You could consider making your own linear pot using a piece of nichrome wire and a sliding contact, preferably precious metal (cannibalize it out of something).

A straight 40cm piece of AWG 30 Nichrome wire would have a resistance of about 8 or 9 ohms. If you put 100mV across it (use a voltage divider from your ADC reference and an op-amp buffer), that's only about 11mA. Then amplify the wiper voltage with a decent op-amp and you're done. Linearity should be excellent (in the 0.1% class most likely).

My suggestion is that you forget about trying to figure out where the needle is at and build additional circuitry that interfaces with the radios tuned circuit.

You could select the AM band which tunes the internal oscillator from about 500kHz to 1.7Mhz. If you got your hands on the schematics for this radio you could figure out where to put your "tapping" point. The problem is not to load the circuit in a way that would alter the frequency, but that's doable.

It could even be as simple as reading the value of the variable capacitor that the dial is altering.

Doing it this way, you are less likely to deface a beautiful old radio and you'll know a bit about how radios work when it's done.

OK, assuming you can detach the variable capacitor from the surrounding circuitry, then it should be a simple matter to read it into a digital system. On your (rather nicely hand-drawn from before the days of CAD) schematic, it's the parts 3326/3327 at the top left just below the antenna.

If you incorporate it into a loop of Schmitt trigger buffers, you can turn the capacitance value into a frequency which can then be counted in software on a microcontroller. Adjust values of R1 until the frequency range is "sensible". 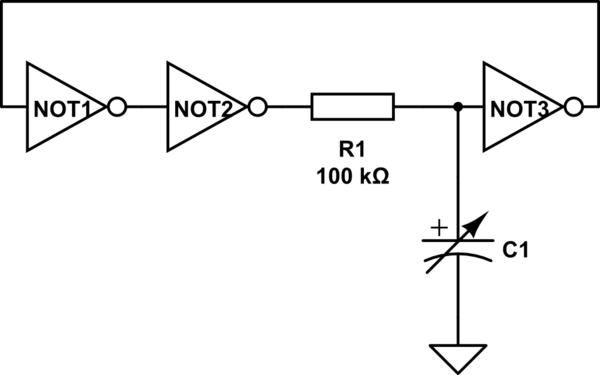 The tuning knob will be driving a variable capacitor. Replace that with an ordinary potentiometer and you should be able to read its value trivially using analogue to digital conversion.

I would put a grid of Gray Code on the BACK of the dial scale, and a duplicate of the "cursor" on the back to read the gray code with reflective opto sensors. That would tell you the ABSOLUTE position the cursor along the dial scale. And it would be completely STATIC so that the position could be retrieved even from cold power-up.

Another alternative would be to use a tiny stepper motor to a length of threaded-rod ("all-thread" as it appears to be called in Europe). Then you can use that to position the cursor at the direction of the microcontroller.

You could even use one of those "filament LED" strips to make a glowing cursor behind the glass window.

Not the answer you're looking for? Browse other questions tagged sensor distance or ask your own question.

2
Technology for precise distance measure?
0
Water level: BIG capacitive level sensor with steel bars?
0
How to measure distance/position accurately?
3
What is this component (probably a shock/vibration sensor)?
0
Local positioning system
3
How can I measure distance travelled in cm without gps?
3
Sensors to detect vehicle height from the side