But what if I change my mind and I don't want my 1k resistor to drop 7.1V but 7.2V instead, so now it would look like this:

And now this is the part where I get confused. Because I can't control the voltage drop of my resistor so it can either be 7.2V or 7.1V. But I don't know which one is the right one.

I could say I want my 1k resistor to drop only 1v so then again:

So and if I don't know what my voltage drop is then I don't know current either. So can someone explain this to me?

Normally, you don't want a fixed voltage for your LED. You want a current. (\$20mA\$ not uncommonly.) So you are focused on the wrong goal.

But let's say you really do want to set up some fancy voltage regulator for your \$9V\$ battery. (Instead of doing the sensible thing about setting up the current, instead.) You can try this. Just use a \$100\Omega\$ resistor where the LED goes, at first, and adjust \$R_2\$ until you measure a voltage across the \$100\Omega\$ resistor that you like (as shown, where the (-) and (+) appear in the schematic and where you place your voltmeter for measuring.) Then you can replace it with the LED and see how that goes. 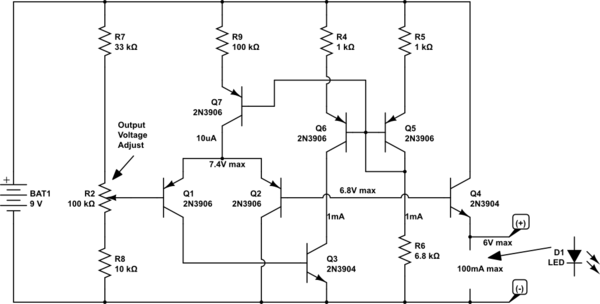 You can play with the potentiometer, \$R_2\$, to then adjust the voltage at your LED. Should only waste an excess of \$2mA\$, regardless of the set voltage. The maximum output voltage will be \$6V\$ with a current compliance of up to \$100mA\$. (\$Q_4\$ may need to be a TO-220 packaged type, just in case.) The problem will be that you will have a very hard time adjusting the potentiometer without having a serious impact on the LED brightness. But it can be a learning experience.

Or you could just use a variable voltage regulator IC.

Also if you were to drop 7v with the 1k resistor then you would be expecting 7.0 mA

But what if I change my mind and I don't want my 1k resistor to drop 7.1V but 7.2V instead

If you're using a 9V supply and a 1.9V LED, then any resistor will always have 7.1V across it.

Perhaps you're not familiar with the "voltage divider" concept? The nine volts of the power supply will automatically distribute itself across the chain of components connected to it it. If we have a 1.9V LED and a resistor, the resistor will always have 7.1V across it, where 7.1V plus 1.9V adds up to be 9.0V, the same as the power supply voltage.

In other words, you don't get to change your mind and have 7.2V instead. The LED gets to decide, not you. (Well, I guess you could instead raise the power supply up to 9.1V instead of 9.0V. Or, instead use a 1.8V LED with your original 9V supply.)

Note that all of the above is describing a simplified case. It's using an ideal LED: an ideal LED which always shows 1.9V across its leads, even at zero current. A real LED won't have a fixed voltage, but instead will exhibit an exponential V-I curve like any real-world diode. A real LED might have 1.9V at ten or twenty mA ...but this voltage will be much lower at a microamp, and much higher at 500mA. If you want to really understand everything that's going on, you'll have to knuckle down and study the exponential diode equation of voltage versus current.

That, or go and play around with a circuit simulator which uses a full-blown mathematical model of an LED, and not just a simplified approximation where the LED Vd is fixed at 1.9V.

Just replace the 1K with an infinite-ohms resistor! In other words, an open switch. But this won't work for a simplified ideal LED, where the voltage across it remains 1.9V forever, even when the battery is removed. :) 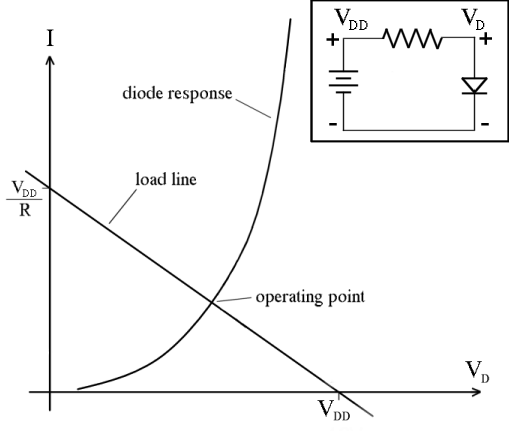 , you can see that this can be solved, or at least conceptualized, graphically as the intersection of the two lines. You change the resistor, that changes the slope of the line, and the new intersection point tells you your new equilibrium point. You need a certain voltage drop? Draw a vertical line at that voltage. Connect the point where the vertical line intersects with the diode curve, connect that point to Vcc, and now you know what resistor you need to acheive that from the slope of the resulting line. In other words, you pick your parameter, and the set of simultaneous equations fills in the rest.

Find out what current, I, your LED needs from its data sheet.

Use a resistor of value R in series with the LED to provide the correct current.

13
Why does an LED have a maximum voltage?