What am I misunderstanding in electrical circuits regarding voltage/current/resistance

I thought I understand electricity but some thing don't add up so I'm hoping someone can tell me what I am doing wrong. So, to me, voltage represents a potential ability/energy of a charge to do some work/to transfer energy. Resistor uses some of that energy to heat itself or do something else (doesn't matter what really), in order to drop the voltage of the charge. By dropping voltage, it also reduces the current (because the charge is now 'less needy' to get to the other terminal). With this understanding of electricity, I tried to understand the following circuit: 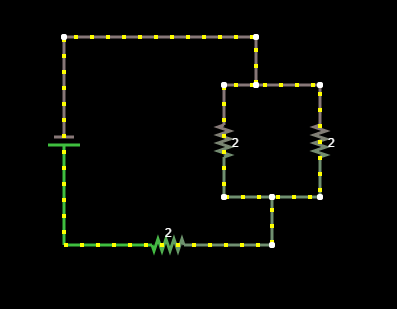 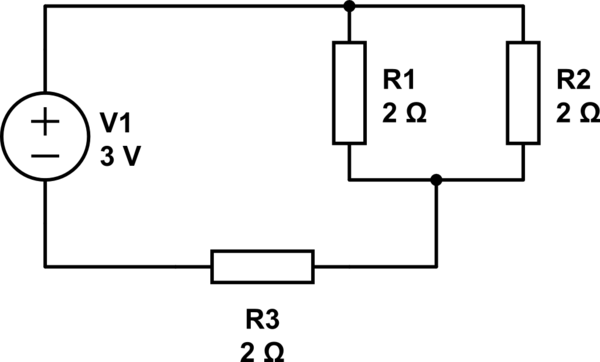 The Voltage source is 3V. The current is easily calculated as 1A.

So the story goes: Source is giving 1 amper of current an 'ability' of 3 volts. The first resistor causes a 2V voltage drop. Now that amper has only 1 volt of 'ability' left. The current reaches the branch. It divides equally, 0.5A goes to each branch. But the resistance of the resistors in parallel branches is 2 ohms, and I only have 1V left per ampere! Not only that, but my current that passes through the resistor is not even 1A anymore, now it's only 0.5A, which means it has only 0.5V of 'ability' left! So what's going on here?

A side question that arises: By Kirchhoffs laws, the sum of voltage drops has to equal the voltage of the source. So in the end, the voltage of a charge is 0 (after it passes thorough the last resistor). Why does it even move then, if it's 'willingness' to get to the other terminal is now 0?

I'm going to zero in on your mistake:

Source is giving 1 ampere of current an 'ability' of 3 volts.

Funny use of terms, but okay. In my terms, 3 volts per ampere is the same thing as saying 3 Ohms.

Yup. It takes 2 V of motive force to cause 1 A of current to flow through 2 Ohms of resistance.

Now that ampere has only 1 volt of 'ability' left.

Now you are 'okay' but starting to tread on thin ice. But yes, there is 1 volt of potential difference remaining and all of the 1 A of current that has arrived at this point, must then also leave this point. And to do so, it must only face one remaining Ohm of resistance.

The current reaches the branch. It divides equally, 0.5A goes to each branch.

But the resistance of the resistors in parallel branches is 2 ohms, and I only have 1V left per ampere!

Here's where you suddenly jump tracks. One volt per ampere means one Ohm. That's what it means. And it turns out that there is only one Ohm there, too. Good thing.

Let me re-write your statement: "But the resistance of the resistors in parallel branches is 2 ohms, and I only have 1 Ohm!"

I didn't change one whit of meaning there. It says exactly what you just wrote. But now you can see that there is a conflict. You are simultaneously saying there is 2 Ohms and there is 1 Ohm. And that doesn't make sense.

The fact is that there is 1 Ohm between the two points under consideration, not 2 Ohms. Yes, there are two galvanic paths and each of these paths represents 2 Ohms, apiece. And the current will only be 0.5 A for each of these two paths, like it should be. But the combined result is still 1 Ohm and the combined current will still be 1 A.

You just need to fix your mental models.

Not only that, but my current that passes through the resistor is not even 1A anymore, now it's only 0.5A, which means it has only 0.5V of 'ability' left! So what's going on here?

You are correct in that the current splits, and each resistor (in this particular case) has 0.5 A going through it, but the voltage there does not split, by \$ V = IR\$, half an amp of current through a two Ohm resistor means there is still 1 Volt across those resistors.

By dropping voltage, it also reduces the current

The current stays the same – the overall amount of charges must stay constant. But because each of these charges now "carry" less energy, there's a voltage difference between the two ends of a resistor.

You're citing Kirchhoff's Law – but that can only work if you acknowledge that current must stay the same.

With that in mind:

You're right, symmetry tells us that through each of the parallel 2 Ohm resistors R1 and R2, half the current in the circuit must flow – 0.5 A.

And together with the 2V drop over the serial 2 Ohm resistor R3 that gives 1V + 2V = 3V voltage drop, which nicely aligns with your 3V source.

When we talk about voltages, we're really talking about energy. And the thing about energy is that it's not always good at telling us what happens to a single particle at every point in the journey. Your introductory physics class might have used a roller coaster to describe this:

You don't have to know the forces on the roller coaster along the entire track. All you have to know is the difference in height between the start and the end. Voltage is kind of like that.

As the electrons move through the resistors, they bump into things, which slows them down. In other words, they lose energy!

Working with electric fields and charges directly would be very, very hard. Fortunately, just as with the roller coaster, we can use energy (voltage) by itself. And instead of looking at individual electrons, we can look at the total flow of charge (current). With that in mind, here are some things that might help:

If you'd like a more detailed look at what's going on with the fields and charges in a circuit, check out this document, which uses those ideas to introduce circuit theory. If you don't want to read the whole thing, just look at the diagrams.

Not the answer you're looking for? Browse other questions tagged voltage current circuit-analysis electricity or ask your own question.