How to adapt a string of 10 LEDs powered by 3 AA batteries to work off a USB port?

I have a string of Christmas lights made up of 10 warm white LEDs. The lights are connected in parallel (not in series). The string works with 3 AA batteries (that is, 4.5 VDC). And all that stands between the power source and the lights is one 200 Ohm resistor (this is a photo of the resistor, in case I read it incorrectly): 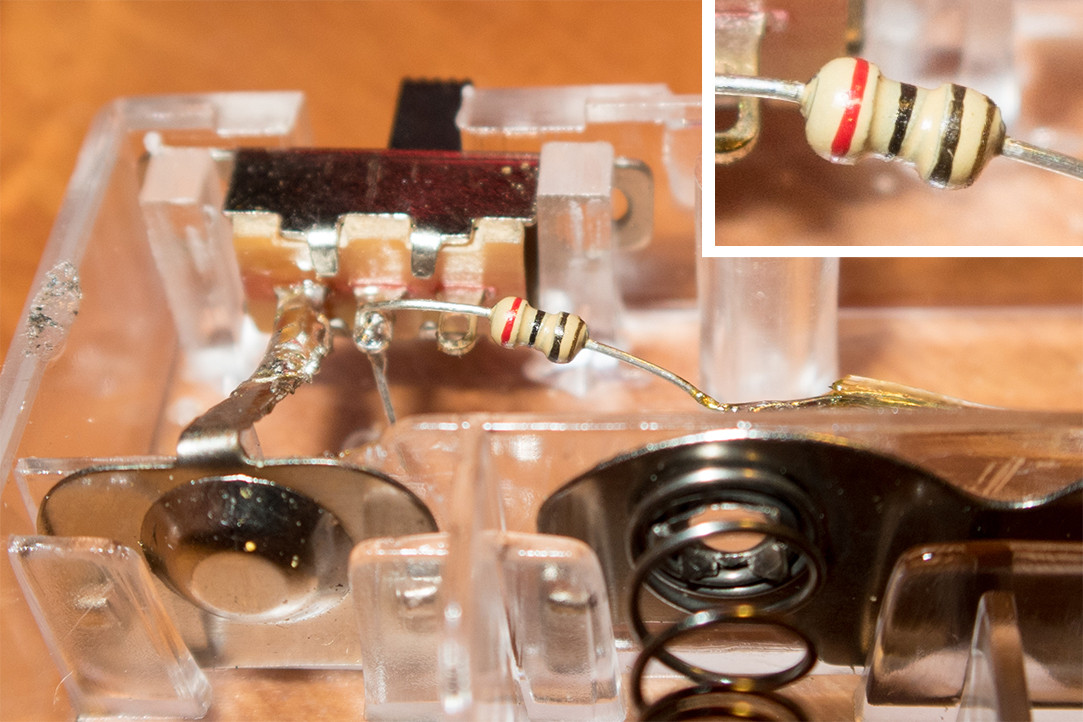 Now, that's all I know/understand of the string of lights. What I want to do is change the power source: I would like it to work off the 5 VDC that come from a USB output.

My basic knowledge of electronics tells me that there's basically 2 things I have to worry about here:

1) How do I drop that 0.5 volt I don't need? (Although, playing around with LEDs, I think they'll have no problem working with half a volt over what they were originally working with); and

2) Is the current coming out of a normal USB outlet (such as from a telephone charger, 0.8-1.2 amps) going to be too much and, if so, how can I drop it to the current needed? (If I'm not very much mistaken, the current will be too much because a normal LED takes 15-20mA, right?)

I understand this issue is very basic but so is my knowledge of electronics. I would really appreciate any help you can afford. I think that if I could "fix" this issue, find a way to get it to work, I would be able to understand a little more about how it works. So far, reading theory... well, it's all mixed up in my head; perhaps if I could solve this real-life situation, the little I understand could start falling into place and organising itself.

So thanks a lot in advance!

The current available from a power supply must be equal or greater to the current required by the load. The supply doesn't attempt to 'push' excess current into the load.

In your case, totally fresh AAs would have a voltage higher than the nominal 1.5v, 3 together might just produce 5v, so I strongly suspect your LED string will tolerate a 5v supply without problems. Assuming 3v for the LEDs, a 200ohm resistor would limit the current to 10mA, which sounds a bit low. I gave up trying to read colour codes years ago when I couldn't make out unambiguously the difference between warm brown, gold and muddy orange, so it could be 20ohms. If that's the case, then it limits the current to 100mA total, or 10mA per LED, which seems more like a reasonable level.

Disconnect the battery, connect the red (+ve) and black (-ve) power wires from the USB, and you should be good.

As Dmitry warns, if you want to run at exactly the current you would get from a 4.5v supply, then either increase the 20ohm resistor a bit, or use an extra resistor in series between the USB supply and your battery box terminals. The latter would be preferrable as it avoids altering the stuff in the box, and spreads the dissipation out over two resistors. Try 6.8ohms, or 10, or 4.7, and see what voltage you measure at the battery box terminals.

Probably it's a little late to add comment, and there are several previous meritorious solutions.

In answer to the original question, I would reason that it is safe to connect a 3 x Battery, 4.5V led string with a Ballast resistor in circuit, directly to a 5v phone or usb charger.

The series "Ballast" resistor normally drops the Battery voltage by 1.5V (nominal) to 3V and limits the current to the leds, with fresh batteries this can often be close to 5V. A ballast resistor provides a measure of current limiting and its value suitably calculated.

With a 5v constant supply the series "ballast" resistor will drop (absorb) 2.0V instead of 1.5v.

A 5V input results in a permanent increase in the current through the Leds, in the ratio of a 2 volts drop compared to the original 1.5 volts drop across the ballast resistor giving 1.33 times the battery current..

A Led current of 7.5mA is well below normal led running conditions. (value derived from a given 1.5v drop across 20 ohms split between 10 leds).

An increase of 30% in the led's current to about 10mA is acceptable and still relatively low.

I would note that led's behave like soggy (Zener Diode) regulators and whilst the voltage across them is considered to be constant, it does rise slightly as current increases, this will marginally compensate for the higher voltage.

In real terms the total power would be circa 500mW with the 10 leds consuming just 300mW and the ballast resistor 200mW, which are acceptable values

AS mentioned elsewhere, the next simplest circuit correction would be to add a single 1A diode in series, providing a 0.6 to 0.7v drop. Then no calculations would be necessary.

any existing balance resistor must be retained.

Recently I found a 4.5V V.DC Mains to DC converter for a couple of pounds(new) which is perhaps the easiest solution of all.

Wow, everyone is over complicating this. Usb 5V to a 1N400x series diode in series with the led battery pack is all you need. 90% of usb computer ports do not require enumeration for power draw, regardless of the usb standard documentation. 99% of usb wall chargers dont need it either, unless you want a high voltage with some newer fast charging ones. Some usb supplies are at 5.2 to 5.3 volt, making a 0.7V silicon diode forward voltage drop ideal. At 5V, it would be just under ideal.

I've done this a hundred times with 2x and 3x led packs.

To answer the current question, the load pulls It. The resistor will limit the current already, no need to look into further current limiting.

The lights are connected in parallel (not in series)

Are you sure about that? White LEDs typically have a forward voltage in the neighborhood of 3.6V, so three of them in series would be 10.8V. There would be no way to forward-bias the LEDs and get them to light with the 4.5V or so available from the batteries.

It's possible the LEDs are powered by a boost converter, but I doubt it since there are cheaper solutions, and from your picture this looks like a device optimized for low cost. It might even be the case the LEDs are in parallel without individual resistors, despite good practice, to minimize cost.

However, the slightly higher voltage from a USB port is not going to hurt. A fresh battery might have an open-circuit voltage as high as 1.65V, getting you to 5.0V if you round to 2 significant figures. Worst case this just makes the LEDs slightly brighter: you won't have a problem until they are so much brighter that they overheat.

What does differ between USB and batteries is the internal resistance. The voltage on a battery will decrease appreciably when it is supplying current, whereas USB voltage is regulated and will drop very little when the current draw is within specifications. If you want to see how this could affect things, try hooking it up with a variable resistance in series. Start with maybe 1,000 ohms (similar to a very dead battery) and turn it down to 0. Observe the brightness of the LEDs, as well as the voltage across them. It will be educational, if not necessary.

Is the current coming out of a normal USB outlet (such as from a telephone charger, 0.8-1.2 amps) going to be too much

No, for two reasons.

Firstly, the current rating is a maximum. Secondly, getting high current from USB requires more than simply connecting an ordinary load to it.

Not the answer you're looking for? Browse other questions tagged voltage led current usb light or ask your own question.

300
Choosing power supply, how to get the voltage and current ratings?
93
How to get more than 100mA from a USB port
0
If LEDs in a series begin to lose intensity and die is it too much voltage or too much current?

8
How do two-leaded color changing LEDs work?
2
connect LEDs to USB keyboard – but they turn off after a second
2
Optimizing LED Project
0
How does this string of LEDs work?
2
Converting pre-lit Christmas tree with incandescent mini-lights to use LEDs
1
Power supply for multiple parallel LED strings?
3
My strands of LED Christmas lights are not polarized, and I don't understand how that works
0
How to wire LEDs and CR2032 battery to make it work