Send a Single pulse "On"; Channel remains on until device's power is cut. Prefer op-amp solution

I know using a 555 timer, it's possible to do this. A single "trigger" input will leave the 555 timer in its ON state until power is cut. However the 555 timer is sort of a noob tool? I'm wondering if there's a similar alternative using an op-amp or other cheaper device that could be used.

Alternatively, is a relay switch the cheapest, smallest, and best option here? What if the initial current is extremely small, like 1 mA?

Additionally... are there such things as relay switches that shut off after a certain amount of time without an activating pulse?

Kind of a long question but thanks

Here is positive-feedback opamp method; the 2 diodes are LOW_ACTIVE; you may want a rail-rail vin-vout opamp; scale up the resistors equally; the resistors may set your standby or latched-on current draw, so make them of high value. 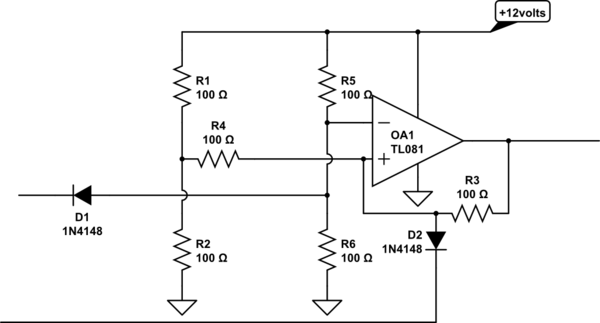 A latching relay is often used for this sort of task - one contact applies power to the relay coil when the relay is operated.

A relay would be somewhat wasteful in a low-current circuit, as the relay coil would require a few tens of mA - if the switched load only draws 1 mA, that's a big waste of power.

Not the answer you're looking for? Browse other questions tagged operational-amplifier circuit-analysis integrated-circuit circuit-design 555 or ask your own question.