I bought a 16bit, 250kSPS AD7689 ADC. The circuit I am designing will amplify voltage (from 300uV up to 300mV) across a current-sense resistor (by 13x) to match 4.096V reference and feed this into an ADC. Measured voltage will either be DC or <1kHz square wave.

Do I need an anti-aliasing filter before ADC even tho I am just interested in "static DC voltage" (I am not interested in transient voltage)? If so, what should the cut-off frequency be (higher than 1kHz because of odd harmonics?)? Also what filter order should I use? 1st order seems enough to me, as 1kHz is way below half of Nyquist frequency.

You need to make sure that noise from aliasing is low enough one way or another.

You mention the signal being 1 kHz square wave, but then say you are only interested in "static DC voltage". Those together make no sense. I'll assume you want to measure the top and bottom levels of this square wave.

The first thing to do is decide how fast you can sample. Aliasing problems reduce with higher sample rate. You say the A/D can do 250 kHz sample rate, but you haven't said if the system it is connected to can do that. In any case, that is way more than you need.

Only you can answer how much frequency content there will be above 125 kHz, and whether attenuating that by 156 (44 dB) is good enough. From your description, I'm guessing it is. If you're not sure, throw another pole at 10 kHz or so at it.

In general, you want to do only enough filtering in analog to reduce aliasing noise to acceptable levels. If you want to find some "average" or whatever, do that digitally after sampling. Digital filters don't suffer from inaccuracies due to part variations, temperature, or non-linear behavior of parts.

Which explicitly says "hey, I want a low pass" (to only let through very low frequencies, ie. "the average voltage).

The cutoff frequency depends on what frequency you operate the ADC on – just because it can do 250kS/s doesn't mean it has to run at 250 kHz. You'll have to control the sampling instants by driving the CNV pin yourself, e.g. with your MCU.

Thus, design of that filter will not really be defined by the cutoff frequency alone, but also by the stop-band attenuation (which might be important to you, but I don't know anything about your signal source, other than it being in a range where simple pieces of conductor can act as antenna and introduce voltages with a comparable magnitude of voltage). And, of course, by technical feasibility – a 10F / 100MΩ RC low pass is a terribly hard thing to build :)

EDIT: As Pipe pointed out, the ADC comes with a built-in single pole selectable switched cap LPF. Might totally suffice – even more so as table 11 from the datasheet says you can configure it to ¼ of the bandwidth. Note, however, that the "less bandwidth means less noise power" still applies; it really depends on what signal your looking at whether this is sufficient or not!

EDIT: as a software-defined radio guy¹, I can only say: go and upvote Olin's answer. He's saying the right thing: A digital filter is easier to implement and far less problematic than an analog one.

Of course, you should still make sure you don't have aliasing in your digital signal – there's nothing a digital filter can do about that once it happened. However, that just means you need strong stopband suppression above \$\frac{f_{sample}}2\$, not a cutoff far below that. It's just mathematical fact that filters can't have infinitely sharp transition from pass- to stopband, so you'd naturally choose one that has a cutoff frequency solidly below the nyquist limit. But that again stresses the fact that cutoff frequency isn't the most critical design parameter here – it's suppression for frequencies above the nyquist limit that might be present in your signal, and that is usually also a function of how "ideal" you can assume your components to be.

For example: If you'd be building a very low cutoff RC filter, you might be tempted to use very large capacitors – but these often have high ESR.

With a 4KHz Low Pass Filter, you have high frequency rolloff and accurate measuring of the 1KHz squarewave---but you have to time the ADC start-convert edge to 10uS before 1Khz edge.

Here is model of your system: 300mvpp, amplified by generic opamp 13X, into 16-bit ADC. I inserted 10mV of 60Hz and 120Hz into the Gargoyles Power Supply Interferer, and surprise the power-supply trash limits your measurement to 15.2 bits. But your thermal-noise is also high. However, Vquant sets the floor.

I used the Generic ADC Worksheet to evaluate the settling requirements. 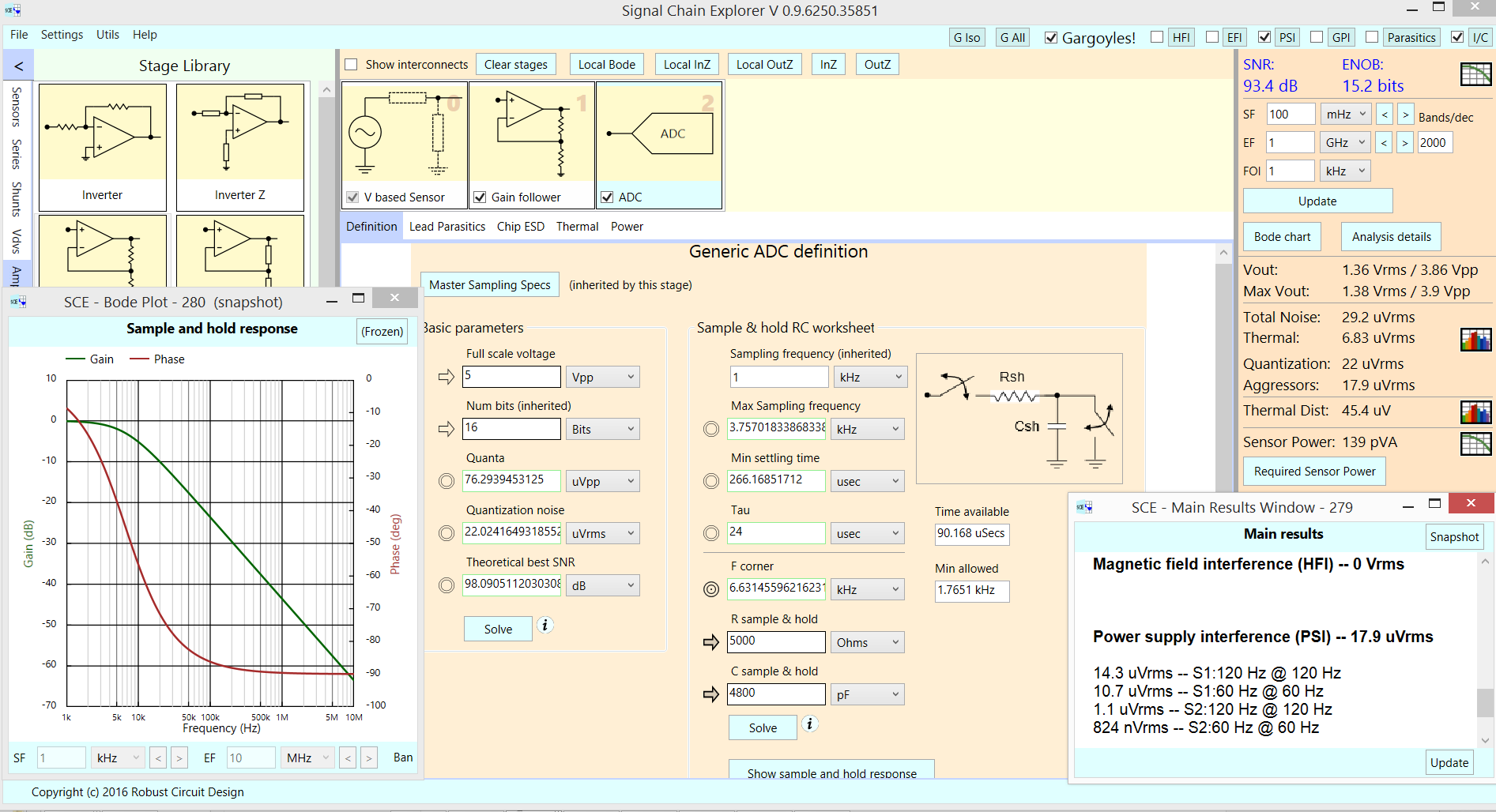 Not the answer you're looking for? Browse other questions tagged adc filter aliasing or ask your own question.