I'm working on designing a custom LED lighting control system for an agricultural research project. This involves supplying significant amperage to high power LEDs distributed over a wide area (e.g. hundreds of feet). I have some influence over all aspects of the design. Each lighting fixture could demand, say, 1 Amp; and lets say there could be 100 fixtures. I'm thinking of using a (PWM dim-able) constant current buck driver to run a number of fixtures, and supplying a high enough DC voltage to each driver that it can run a number of fixtures wired in series.

Power efficiency is of paramount importance to the project, and I recognize that the LED selection has a lot to do with that (i.e. luminous efficacy), but from a strictly electrical standpoint I'm seeking advice on how best to optimize power efficiency in such a system.

I need typical (i.e. 5V or 3.3V) control / logic voltages at the light fixtures, but I can also envision benefits in carrying higher voltage (e.g. 36V) throughout the system, and DC/DC switching it down locally, so that I can have a number of LEDs in series supplied by each driver so as to overcome the forward voltage burden of the LEDs.

Does anyone here have experience designing LED lighting systems like these, and can share insights on how to distribute power efficiently to them? I am wondering if I have the right idea, e.g., putting in Meanwell AC/DC power supplies at regularly spaced intervals to independently supply power to regions of the system, and if so whether there are special considerations with regard to the type of power supply used in this application. I've read that power factor can be an issue in systems like these, but I don't understand why, or what is to be done about it. What kinds of power efficiency can I reasonably expect to attain?

Should I instead by thinking about running 110VAC (or 240VAC) to each fixture and doing the AC/DC conversions on the driver boards instead?

You need some Power Factor Corrected circuitry to convert from AC to DC if your goal is to efficiently use your power. A "normal" AC/DC converter uses a rectifier and "storage cap" to get DC from the AC mains power, then converts that through a SMPS (AC/DC transformers do it without the SMPS, but still using the rectifier+diode. 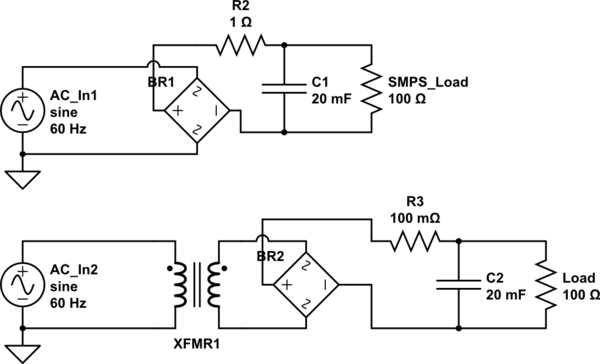 The problem is that the "storage capacitor" only really charges during the peaks of the AC waveform, thus "clipping" the waveform, and wasting available power during the rest of the wave.
This causes such "non-PFC" products to be unable to draw even close to theoretical max. power through a circuit breaker, and can result in punitive charges from your electricity provider.

There are ways of converting AC mains to a predetermined DC voltage while drawing power from the full AC waveform, but the designs are a bit more complex than I'm willing to put together for a free answer.
The basic premise behind (at least my designs) for these is in using a switched inductive load (rather than a capacitor) to draw charge from an entire half-wave of AC, then convert the stored inductive power to DC at your desired voltage (If you're interested in further discussing my designs, say so in comments & I'll give you contact information).

Once that problem has been dealt with, your DC/DC SMPS converters sound like a logical & efficient choice for converting between DC voltages, but I would suggest that you consider using higher-voltage series strings of LEDs, say 100V or so, to reduce the total current required by your system, thus reducing your cost in purchasing adequately heavy-gauge wiring to carry all those amps around.

Then it becomes a simple matter of running a single AC/DC converter to supply say 10A or so of DC at 100V, then run a buck converter to step that down to your 5.0/3.3V for your control circuitry to run your PWM dimming to each strand (either buck-style, or simply "strobing" the LEDs with PWM as many LED flashlights do).

All told, I would consider anything above 75% power efficiency as "quite good," considering the number of conversions necessary for multi-voltage DC, plus PWM controlling the brightness (and conductor ohmic heating losses).

It is much more efficient to run the LED fixtures with 48V Constant Voltage Supply then use a buck step down constant current driver to drive strings of about 16-21 LEDs.

I use 48 to avoid any electrical safety issues associated with higher voltages than 50V.

I use the Mean Well HEP-600-54. I then adjust the headroom voltage down to get maximum efficiency from the LED drivers. I will "bin" the boards by forward voltage so each power supply will be powering boards with similar forward voltages. It is most efficient when the input voltage is just above the string voltage.

The approach depends on what LEDs you are using. For research you need to allow each wavelength to be dimmed to the desired PPFD, so usually this means strings of the same wavelength and a wide variety of wavelengths.

The reds, amber, orange LEDs are AlGaInP and operate around 2V when Blue. Green, and White, are GaInN operating around 3V. When I make the individual strip circuit boards I do one side for 16 GaInN LED strings and the flip side 21 AlGaInP LEDs. For the LEDs I use, 16 AlGaInP LEDs forward voltage is about 45V as is 21 AlGaInP LEDs. This makes for a very efficient buck converter by being able to lower the input voltage headroom. If I did strings of 16 red, the forward voltage would be only about 35V.

Higher voltages and and higher wattage supplies are more efficient. Unless you can design an affordable power supply more efficient than the Mean Well HEP-600.

If I were to design my own power supply for each fixture, I'd use an AC/DC fly back controller that would accept feedback from the buck regulator for dynamic headroom control. I have too many other issues to deal with right now which override power supply design.

I have two 48v to 5V regulator circuits, one linear and one switcher and which is used depends on the power needed for control logic.

To minimize control logic I am looking at using a PWM Shift Register controller to store the settings and drive each dimmer rather than a micro-controller. Then I can use three conductor wire to supply power and a serial signal to set the dimmer PWM.

Thermal management is the name of the game. Horticulture uses lots of Red and most red LEDs have very poor performance vs. Temperature. Many fixtures run their LEDs with a Tj around 100°C. At that temperature you will lose 45-50% of radiant flux (PPFD) measured at 25°C.

I use water cooling. The thermal path from the LED's thermal pad to the water is 100% copper with very low thermal resistance.

I have done a lot of LED view angle modeling to optimize the height between the fixture and the canopy while maintaining uniform distribution of photons. The biggest gain in power efficiency is to get the fixture closer to the canopy. The last 12 inches between the canopy and fixture accounts for the greatest percentage of PPFD per watt.

Not the answer you're looking for? Browse other questions tagged led power design lighting or ask your own question.