Why do power supplies generate noise? Also, I have read that the ground receives noise. Why? This phenomenon also appears in integrated circuits.

I had read in a paper that "We use a conventional differential pair as an input stage to robustly reject common mode and power supply noise". How do differential amplifiers reject noise coming from the power supply?

Noise comes from two sources. From other places within the system, and also from outside the system, eg. the wife's hair-dryer, your cell phone.

Noise is especially prevalent in mixed mode systems. That is, where there is a mixture of digital (Switching) and analog circuits.

Most power supplies these days use digital switching to produce voltages at a minimum of weight and physical volume. As such they tend to be noisier than traditional linear power supplies.

Noise is normally reduced by the liberal application of bypass and decoupling capacitors between the rails. Large values are usually used close to where the power rail enters the PCB, and faster smaller capacitors distributed across the board.

In some cases, when more isolation is required, part of the power rail is split off from the main rail through a small resistor to another bulk capacitor close to the linear circuit it is powering. The resistor capacitor combination forms a low pass filter that significantly removes high frequency noise. However, this method should be used carefully for digital or high frequency linear circuits. 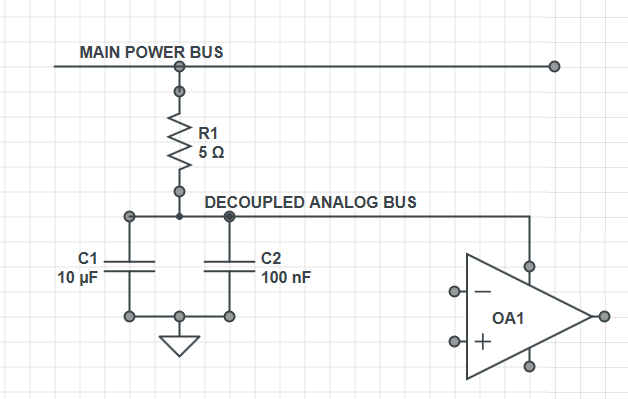 Ground noise is mostly caused by a variety of currents being carried and turned on and off at various times by whatever circuits are working. Ground noise is especially a problem where high current loads are being driven, like motors, solenoids, heaters, etc. Because of this it is normal design practice to return such currents via their own grounding path to a central grounding point.

As for differential op-amps. The trick here is to ensure that both inputs are subject to the same amount of noise. Since the circuit subtracts the two inputs, the noise cancels out. To do this properly, the input signal routing should be common to both and if wires are involved they should be twisted together in a twisted-pair.

Not the answer you're looking for? Browse other questions tagged power-supply noise ground or ask your own question.