I am learning different voltage to current converters during my bachelor thesis which are a composition of OpAmps and Transitors. The following structure is quite interesting for my thesis and I want to learn it by heart.

In this topology, I can see that if feedback is taken from Emitter to Inverting terminal of OpAmp (with +6V grounded), the output current seems quite stable in simulation and control seems very simple and also that the output voltage of OpAmp is Vbe higher the input voltage in case Rf = R1 (I would appreciate if i would know the disadvantages of that structure).

However, in case if feedback is picked from collector of transistor, as is shown here, the output current Ic is not stable anymore and there is continuous swinging on output current. I can't understand why does this happen. This was already discussed in What does this op amp/transistor circuit do? (revised circuit) from Andy Aka, according to him it happens because of OpAmp gain coupling with Collector gain of transistor which causes it to swings. I need more analysis in this direction- and will be very grateful if someone can suggest any literature on this swinging effect where I can learn it into details ! 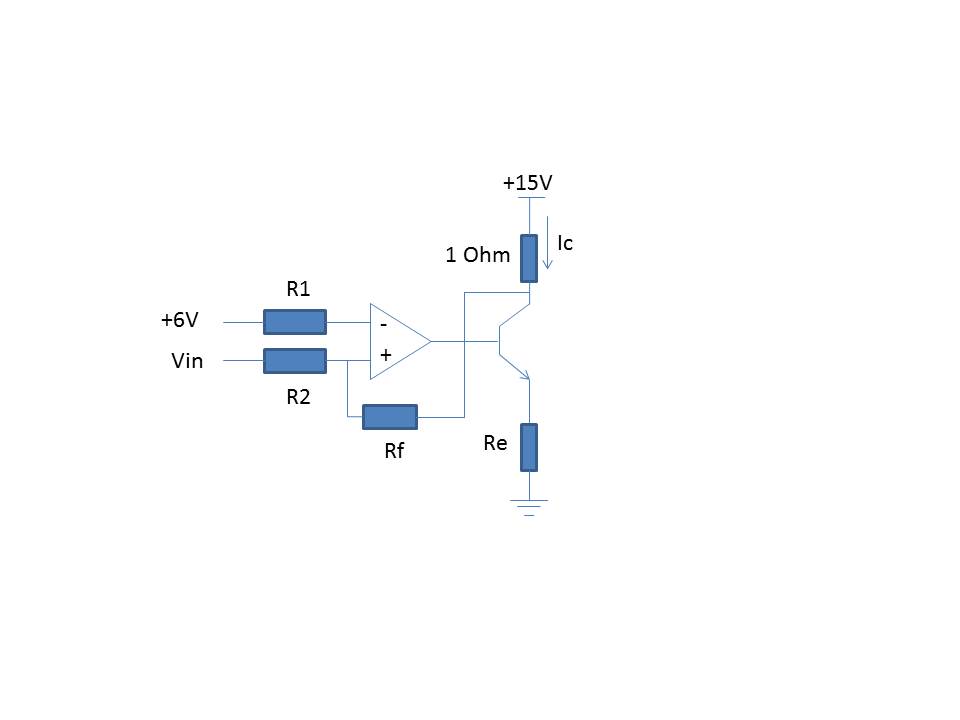 Thanks alot for your answers !

Positive feedback occurs when the signal fed back into the input is in phase with the output. A circuit will oscillate when positive feedback causes the loop gain (amplifier gain + feedback) to be greater than 1.

In your circuit the signal is inverted as it goes through the transistor, so it is 180º out of phase and produces negative feedback. However due to capacitances in the op amp and transistor the phase changes as frequency increases.

If only one capacitance was involved then the maximum phase change that could occur would be 90º and the circuit would always be stable. However if several stages have capacitance then the total shift could reach 180º at a frequency where the amplifier still has some gain, causing the loop phase shift to reach 360º - positive feedback! If the loop gain is greater than 1 at this frequency then the circuit will oscillate.

Op amps have several internal stages and very high gain, so to make them stable with feedback one stage may have extra capacitance added to make it the dominant pole. For an op amp to be unity gain stable the gain must go below 1 (0dB) before any other pole causes the phase shift to reach 180º.

If you add another gain stage externally then the total gain is increased and other poles may be reached before the gain has gone below 1. The external stage may also have a pole at a frequency which is within the frequency range of the op amp's dominant pole. Most op amps are designed to have the best possible unity gain bandwidth, so they are only compensated enough to barely keep the other poles below the 0dB line. therefore any significant external gain or phase shift could make them go unstable.

To make this circuit stable you could try using a lower bandwidth op amp, or one which can have an external compensation capacitor added, or create an external dominant pole by placing an RC filter in the feedback loop. However it will still have the other problems mentioned.

Taking feedback off the Emitter is better because the transistor's voltage gain is less than 1 at this point, and it is isolated from the Collector so changes in load impedance have less effect. In Common Emitter mode a bipolar transistor has good current regulating ability all by itself, so the op amp can have lower gain and bandwidth. To get these advantages for current sourcing rather than sinking you just have to swap the transistor from NPN to PNP.

Is there any other way to calculate output voltage of OpAmp (Base voltage of Transistor) without knowing exact emitter resistance ?

No. Since the load voltage is added to the Base-Emitter voltage, you must know what the load resistance is in order to calculate the op amp's output voltage.

Not the answer you're looking for? Browse other questions tagged transistors operational-amplifier control current-source feedback or ask your own question.

3
What does this op amp/transistor circuit do? (revised circuit)
0
Resistor values for a Voltage- Controlled Current Source Circuit