Book Suggestion - How to calculate the power dissipation of a BJT

I did a exam that asked for "power dissipation" of a given BJT circuit. The question was simple but my professor considered my calculation of dissipated power wrong, because my answer was \$P = V_{CE} \cdot I_C + V_{BE} \cdot I_B\$.

Can someone indicate a textbook or a scientific article confirming my answer so I could talk to him again ?

I found some links on the internet confirming my answer, but he would not consider a website...

From a theoretical POV your prof is WRONG. You correctly calculated the total power dissipation of your BJT.

Your professor might be right only in an approximate way: if both the BJT quiescent point is in the active region AND its \$h_{FE}\$ is at least 10-20, then he is (approximately) right, because then \$I_B\$ would be much less than \$I_C\$ and \$V_{BE}\$ would be about 0.6V, so that the \$V_{BE} \cdot I_B\$ contribution would be negligible. In this case you cannot be deemed to be wrong, but only to be overzealous.

This latter case is particularly important for power BJTs, since their \$h_{FE}\$ is quite small (~20, or less sometimes), so \$I_B\$ is not so much lower than \$I_C\$ even in the active region. Thus, to bring them into full saturation you sometimes have to provide an \$I_B\$ that is comparable to \$I_C\$. Considering that \$V_{CE(sat)}\$ could be less than \$V_{BE(sat)}\$, this means that in some particular (but not theoretical) case base dissipation could be slightly higher than collector dissipation. Neglecting it would be disastrous, then (especially when choosing the right size for the heat sink!).

BTW, If your professor doesn't think that the \$I_B\$ term is right, simply redraw the transistor circuit with the base powered by the Thévenin equivalent of the bias network (and whatever is connected to the base), so that it can be modeled by a simple two-terminal network. Then calculate the power that that equivalent circuit provides to the base of the BJT and ask where does that power go, if not into the BJT?

Conservation of energy is a basic law of nature. I hope your professor doesn't need a book reference to believe that!

Long story short: You got it right, he is wrong.

I would challenge him (caveat: that may fire back):

Get a bit NPN power transistor like the 2N3055. These can take up to 7A of base current. Short C and E so that Vce is zero. Then apply 6A of current between base and emitter.

Ask him to put his finger on it. If he is right, the power dissipation should be zero, so the transistor will not heat up at all. If you're right Ib * Vbe does dissipate power and converts into heat.

I'm pretty sure he'll change his mind about BJT power dissipation within half a minute or so.

Unfortunately you may be stuck in a position where your professor isn't going to admit he was wrong (or at least less correct than you) in order to save face for himself.

I don't have a book suggestion, but you could download a free SPICE program like LTSpice, build the circuit in it, and measure the various voltages, current's, and power dissipation.

That could be both useful for you to learn how to use a SPICE tool like that (it isn't overly difficult), and you could have the fun of listening to your professor explain to you how somehow SPICE must be wrong.

Your professor is, sad to say, wrong. Consider the following circuit: 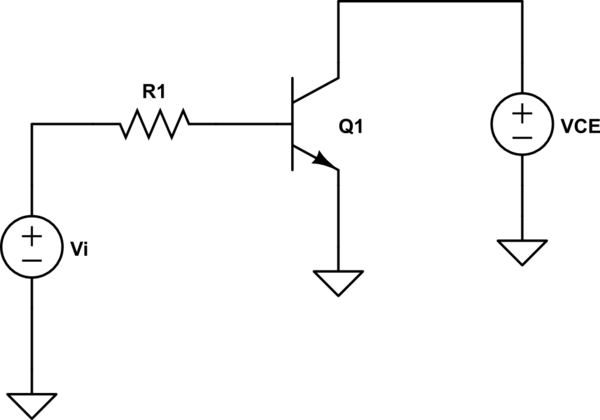 Total power is (Vi x Ib) + (VCE x Ic). If your professor is correct, then the power dissipated in the resistor is Vi x Ib, but this implies that Ib = Vi/R1, and this is only true if Vbe is zero, which is not true. Instead, VR = Vi - Vbe. This leaves a total power Vbe x Ib unaccounted for.

Good luck on getting your professor to admit his error. He has so obviously mishandled the problem that admitting his mistake will be extremely difficult for him, and he may lash out at you. At the very least, make sure you approach him in private, as a public discussion is unlikely to go well.

Even in private, there is a distinct possibility that he will react with hostility, so be prepared.

Not the answer you're looking for? Browse other questions tagged power books dissipation or ask your own question.