When hooking up ICSP, is it safe to connect Vpp to MCLR while the +5V from ICSP is also going to the MCLR pin though a pulldown resistor and Vdd of the microcontroller?

I'd suspect this to be unsafe as you would get 5V and 13V from two different voltage sources at the MCLR pin momentarily.

How can you correctly design an ICSP circuit? 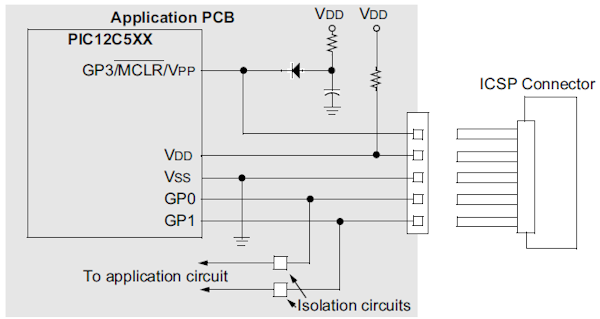 So the diode provides \$V_{DD}\$ to the MCLR pin when the ICSP connector is not connected or when \$V_{PP}\$ isn't present. This must be a Schottky diode.

Reason not 100% certain but note it is shown as a resistpr or a direct connection.
On page 2-2 of the data sheet it says:

Yes, it's perfectly normal to have a resistor on MCLR to Vdd, but also raise MCLR (this time in it's Vpp role) to the programming voltage during programming. I usually use 20 kΩ for that. It's a good tradeoff between being low enough impedance to not pick up noise, but high enough that most programmers out there will have no problem driving the line to the Vpp level. Note that can be up to 13 V on some PICs.

You also need to consider the current getting dumped onto the 5 V supply rail. With 13 V for Vpp, 5 V supply, and 20 kΩ pullup resistor, 400 µA will go onto the 5 V rail. If the rest of the circuit draws at least that, then there will be no problem. The power supply will just supply 400 µA less. If it's just the PIC, you may have to consider clamping the 5 V supply, using a higher pullup resistor, or putting a diode in series with the resistor. In practise most of the time 400 µA is small enough that other parts absorb the current, and most newer PICs use a lower programming voltage anyway.

For more background and general demystification of designing to in-circuit programming see my writeup at http://www.embedinc.com/picprg/icsp.htm.

1
Problems starting PIC18F4680
1
12F675: ICSP: /MCLR internally tied to Vdd
3
PIC/ICSP - Protect circuit from VPP voltage?
0
How to connect a dsPic30f2010 to pickit3 icsp
2
Is it possible to use an opamp to generate 13V VPP for ICSP?
0
Simple Servo Control Issues with PIC and ICSP
0
Can I use pin as both an ICSP pin and as pwm output?
6
Intermittent MCLR reset on PIC32 - involves switching electromagnets
0
Which pins should I connect to program a PIC chip using the SNAP programmer?