Closed loop gain A' of the above op amp system is given as:

where A is the open loop gain which is a positive huge number.

But in a text I encounter the following:

So if the above conditions are correct, does that mean that even the β causes 180 degree shift, it is not enough to create positive feedback? I mean |1 + β*A| can still be greater than 1 even β is negative.

Which one is correct?

Here is the text where I encountered these conditions: 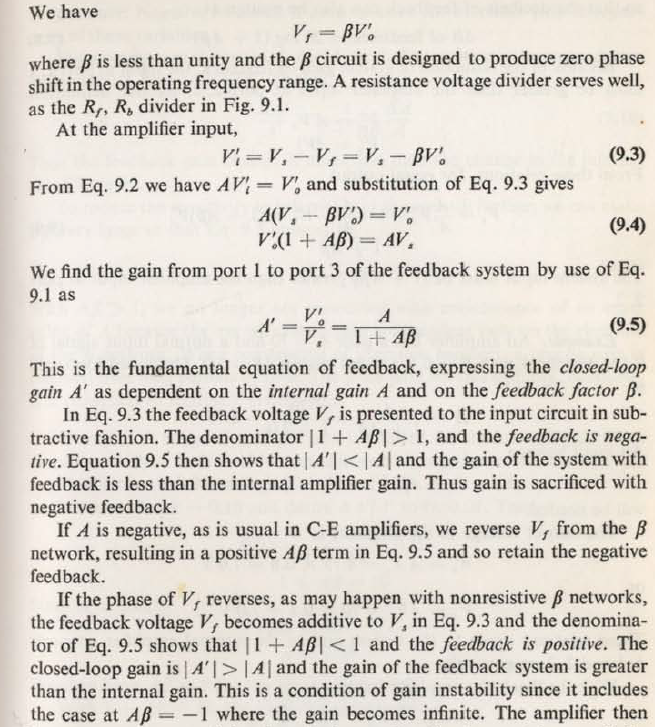 The derivations of these formulas assume the systems are Linear (https://en.wikipedia.org/wiki/Linear_time-invariant_theory).The examples you gave that seem to violate this, are cases where the loop gain is so large linearity is no longer satisfied. For example with B = -10 and A = 10000 you find that the closed loop gain is negative, this doesn't make much sense if the open loop gain is positive and if we consider values of AB between 0 and -1 we find the closer to -1 we are the larger the gain gets, yet it is still positive. Then at -1 the gain goes to infinity. Past this point, we can no longer apply those formulas, hence the contradiction.

I wouldn't say you are missing something, but the book is certainly not giving you the full picture.

"Feedback" is a complicated topic, and it can't be reduce to "\$a\beta > 1\$ + positive feedback = instability" this has been know for almost 100 years, but people operates with oscillators from a lot before control theory was developed, so in order to explain instability they find that \$a\beta = 1\$ means oscillation for a given frequency, so this should be a "boundary" between stability and instability. This is wrong, the only stability criterion is the nyquist one.

But why the book is saying what is confusing you? As I said earlier control theory is not trivial, there are books fully dedicated to explain the basics of it, so a circuit oriented book can't explain everything. nevertheless, for most introductory practical applications the Barkhausen Stability Criterion, while wrong, still applies. This means that the circuit will be unstable if \$a\beta >1\$ and you have positive feedback, so there wouldn't even exist a transfer function since \$V_{out}\$ would go to infinity in no time.

I suggest you to understand what the book tries to tell you, that is how the fundamentals parameters of an amplifiers circuit (input and output impedance, gain, etc..) change with feedback and if you want to really understand how stability works, read some specialised book on the topic.

That being said, i would address your question directly.

Which one is correct?

option 1) is the correct in control theory, but as I said for this case, the transfer function wouldn't be defined.

Here's my take on it, those conditions are wrong when it comes to defining if the feedback is positive/negative, so

Also, the book states three things in this page that are particularly confusing.

In the Eq. 9.3 the feedback voltage \$V_f\$ is presented to the input circuit in subtractive fashion. The denominator \$|1+A\beta| > 1\$ and the feedback is negative. Equation 9.5 then shows that \$|A'|<|A|\$ and the gain of the system with feedback is less than the internal amplifier gain. Thus gain is sacrificed with negative feedback.

*Notice this is useless to his prove, removing this premise doesn't break the conclusion. It is probably mentioned as it is common to have negative feedback systems where \$\beta>0, ~A>0\$

*Also useless to the conclusion, but probably used to hint that \$A>0\$.

Not the answer you're looking for? Browse other questions tagged positive-feedback or ask your own question.