This is part of an iPhone 7 schematic. The VDD line is the main voltage rail for the phone.

I noticed this AC coupling tied to the LCM (display ground) I'm not familiar with MIPI but assume it has to do with connecting an external monitor to view display on the iPhone.

My understanding is that AC coupling caps is to allow ac to pass but block DC so, how would there be any AC on the main VDD line for implanting AC coupling caps? And what's the purpose?

The reason is explained on the schematic. It says "AC return path for LCD MIPI which is referenced to VDD_MAIN".

Most likely this means that some of the traces carrying fast MIPI signals use VDD as a reference plane. If these traces change reference planes to GND, for example through a via or a connector mating to a shielded flex, then caps between the two reference planes are required to allow the AC return current to find the shortest path and not wander around and cause EMI issues. 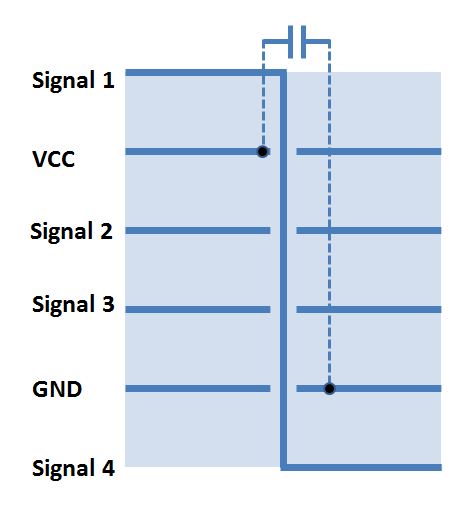 Say HF current flows into trace "Signal1". Return current will flow in the closest copper reference plane, here VCC. When the trace goes through a via, a stitching capacitor is added to allow the return current to also change layers. If both sides of the board had ground planes, a via would be enough.

This is all speculation, but that's a complicated high-speed digital bus, and there's a lot of digital logic on the other end: Somehow, AC noise will couple onto VDD, be it in the cable or at the display end of things, and that noise is best gotten shorted to ground as early as possible, especially before it reaches other subsystems through shared power rails.

Not the answer you're looking for? Browse other questions tagged circuit-analysis integrated-circuit circuit-design or ask your own question.

2
Why gmbs is not zero when B and S are tied together?
0
Why phase bump causes signal distortion in source follower?
0
Wire to VDD or GND?
0
Capacitive coupling: how to collect 60uA from this set-up?
4
Why does the IC not respond (INA200)
0
Vdd rise test in real life
3
Why does this block diagram and equation give the wrong result?
1
Why is \$V_{\text{ov}}\$ not a good design parameter?
0
Repurposed amplifier sanity check + ground connections