How to keep the bias current constant in class AB output stage?

I am working on a hobby project to build a small audio amplifier. Actually the idea behind the circuit is to build a 0.5W-1W audio amplifier that can be powered from a single 9V battery and have decent audio performance in terms of THD. Keep in mind that I want it to be a discrete design and don't want to use any IC.

I have built and tested the following circuit with a pure sinusoid input 1KHz and a pure 8 ohm resistive load. 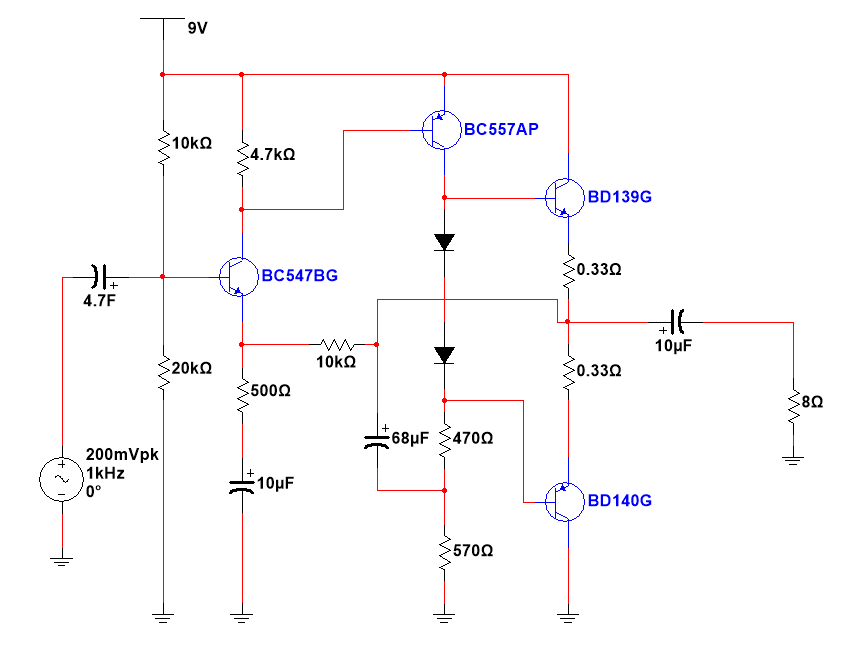 Here is what I found

The output bias current with no input and no load is approx 12-13mA. As soon as I connect my input sinusoid and resistive load, it shoots up. For a maximum 6 V pk-pk swing it goes up to 120mA. If the output swing is reduced, the DC current also reduces. I don't understand this behaviour. Should not the DC current be constant and not affected by signal and load variation?

Please help me understand this. its killing me. I would like to know if the way im testing the circuit and measuring the DC current is correct and what would be a typical value of bias current for such a circuit?

Thank you all very much in advance for your feedback. Regards,VK

The top transistor (BD139) supplies positive current to the load as well as bias current. It doesn't draw current FROM the load, only the bottom transistor does that - which is why it's called a push-pull amplifier.

You're only measuring the "push" half of the AC output waveform (in addition to the bias current) across that resistor, which, on a multimeter will look like a DC current.

So the increase you're seeing is NOT bias current but output current.

You can't eliminate it, other than by removing the load impedance or the AC input.

(Also, @Bimpelrekkie is right, there's an emitter resistor missing on the first stage)

This pretty much requires a differential probe (or the difference between two channels) on an oscilloscope.

Power in = power out plus losses.

Sounds OK, not great but OK.

Hmmm Output bias current only has meaning when the output stage is in a quiescent state.It provides base current to the two complementary output transistors that sets a point on the V collector / I collector load line where it starts to become linear (normally curved for low base current).This curent is only constant when there is no input signal -When input is applied ( eg your 1khz test signal) this" bias point" actually moves with the signal, which obviously has to drive the base current beyond the no signal bias point ( signal generated base current essentially increases the bias current!!)- to yield power amplification. So bias current means exactly what it says - the output stage transistors are biased slightly on (ie BOTH conducting) when there is no input signal this is done to move the ouput load line into a linear portion of the V/ I curve.In perfect class B o/p stage, there would be no bias current at all.I dont see how you can measure "bias" when the ouput stage is amplifying a signal - it is meaningless as the static or standing DC bias at no input becomes an AC base driving signal when an ac input is applied. Bias current does need to be kept constant, it needsto decreases with the output device's temperature- Traditionally this was done using 2 emmiter base junctions of similar transistors to the ouput devices. These would be in place ofthe 2 diodes shown on your schematic, These 2 junctions voltage sepperate the 2 output device bases by approx 2 x Vbe. Furthermore the bias current needs to be reduced as the temperature of the Base collector junction of the ouput device rises. By placing the 2 emmiter base juctions in thermal contact with the output devices -some degree of thermal compenstaion can be achieved.

As said by the others, bias should be measured as voltage across the emitter resistors of the output stage without load and input signal (or else you will be measuring the output current of the amp).

OK, how to set the bias in a push-pull class-AB output stage...

The Vbe of your BD139 and BD140 depends on the transistor's internal junction temperature. It decreases by 2mV/°C.

At idle conditions, a decrease in Vbe will cause a higher current to pass through the transistor, which causes it to heat, which decreases Vbe, which increases current...

With only 9V on the supply, your transistors don't risk going into thermal runaway, but the diodes should be thermally coupled to the heatsink. This way, when the transistors heat, the diodes' voltage drop decreases by the same 2mV/°C, and this compensates Vbe change.

There is a better circuit through, which is used quite universally in power amps: 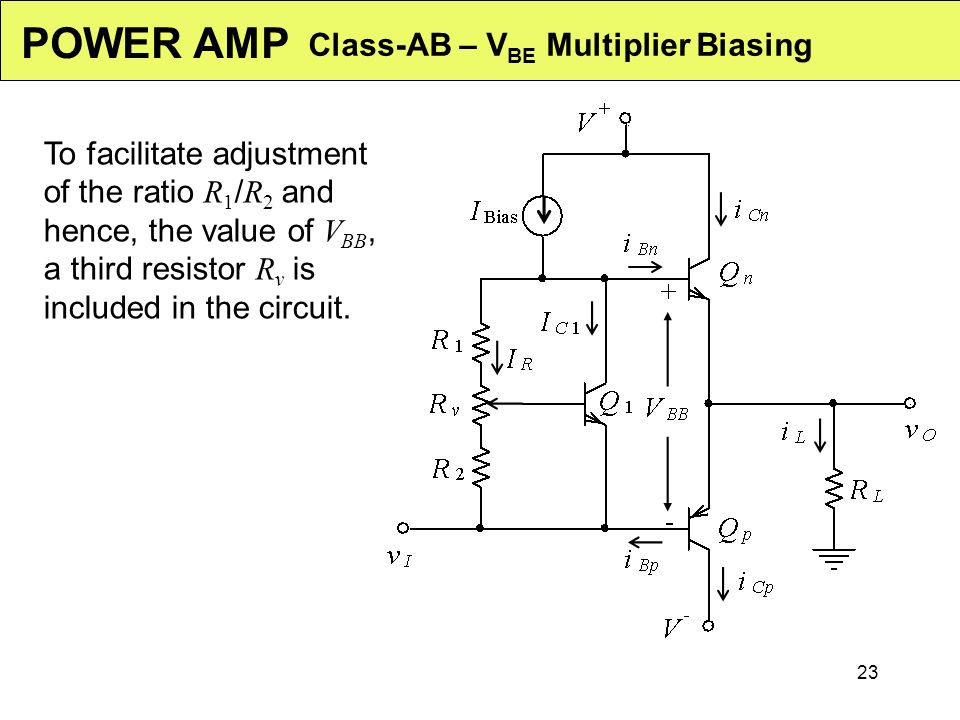 The circuit around Q1 creates a voltage between the two transistor bases. Q1 acts as a common emitter amplifier, which amplifies its own Vbe by a ratio set by the potentiometer. Q1 is installed on the power transistors heatsink, so it follows the output transistors' temperature and compensates for it.

Then you simply adjust the pot to get the bias current you want, while monitoring the voltage on the power transistors' emitter resistors (not shown on this schematic).

Just replace your two diodes with this Vbe-multiplier, attach the transistor to the heat sink, and set the bias with the pot, it's quite practical.

Now, about your circuit:

The output transistors are current-driven, thus crossover distortion behaviour will depend on how their hFe matches, and the value of emitter resistors is not critical.

The circuit around the input transistor is weird. Current in the BC547 is set by feedback, to make the voltage on the 4k7 resistor equal to Vbe of BC557. Thus the input transistor is biased at 130µA, which is very low. Across the 10k feedback resistor, this creates a 1.3V drop, this must be why the 10k/20k resistors which set the DC base voltage of BC547 are not equal...

Not the answer you're looking for? Browse other questions tagged current amplifier audio bias push-pull or ask your own question.

2
Distortion in the output of amplifier circuit using uA741 + schematics and graphs
1
Opamp: amplifying DC bias problem in output?
0
Should bias voltages still be in range without driver/output transistors?
1
What is a normal quiescent current in BJT class AB amplifier
0
Why is the calculated current with P=VI and R=V/I not equal?
0
Autobias Vbe with output current sensing
1
Design of Class-AB output stage
0
How can I choose the resistors for a push-pull class AB amplifier (diode biasing) to get a certain bias current?
0
Need Help to Determine Quiescent Current in Class AB Output Stage
0
Understanding constant current source in amplifier stage