What is causing this Op-Amp Distortion

I am new to analog electronics and I am still learning about op amps. I am driving an 8ohm 15 watt speaker with just an op amp and my phone. What I do not understand is that I have a dual supply, 10V and -10V, more than enough voltage to handle audio being doubled from a cell phone. If the speaker is 15 watts, and there is sufficient supply voltages on both ends. How is there distortion when I turn up the volume or heavy bass occurs? When I run a sine wave from my function generator through the circuit I have no problems at all, I can turn up the amplitude until the output is clipped by the supply voltage. Does anyone know what is happening with my phone input/output though?

Since you're new to electronics I simplify here a little bit:

OpAmps don't have the current drive capability to drive speakers directly. Speakers usually have a impedance in the low ohms. 8 Ohm is typical.

If you connect speakers to your OpAmp output, the OpAmp will likely try to drive the speakers nonetheless, but after reaching the current limit it won't drive it any further. That will clip the waveform, and this is what you hear as distortion.

You need a power amplifier stage to drive your speakers. These can be built using an OpAmp and some extra transistors to handle the higher load.

On the other hand it's more economic if you just use an audio amplifier chip that handles the 15 watt directly. The TDA2030 chip for example will happily drive 10 to 14 watt and is really cheap.

In short: Think of OpAmps as pre-amplifiers, to drive anything bigger you need a power amplifier.

What you need is a real power stage that runs from around 20 V and can source and sink 2 A.

Op-amps don't have the grunt for this

An ordinary op-amp is designed to drive small-signal loads such as small headphones, the inputs of other amplifiers, or other circuits. A 8Ω speaker simply requires too much current (amps vs millamps) for an op-amp to drive it alone.

But, boosting the output current is simpler than it sounds

Fortunately, it's possible to build a power amp around an op-amp, as follows: 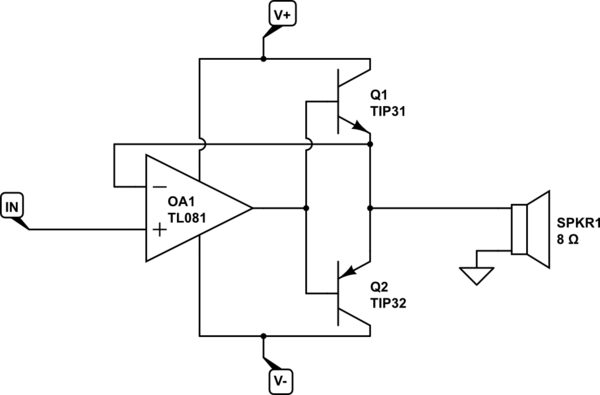 In this circuit, Q1 and Q2 act as a class-B emitter-follower current booster for OA1's output. Normally, a class-B or AB stage requires a bunch of biasing to keep crossover distortion down, but by placing the stage within OA1's feedback loop, the op-amp takes care of most of that funny business for us by way of feedback action, although it does require a fairly fast-slewing op-amp to do this. As long as the power supplies have enough grunt, and Q1 and Q2 are beefy enough and adequately heatsinked, this circuit is adequate to drive whatever speaker you throw at it, and cheap as chips to build. Of course, the sonic performance is mostly dependent on what op amp you're using, and if you need to, you can configure this as something other than a unity voltage gain amp by changing the feedback network, just like you would with a small-signal op amp stage.

You should post more info about the opamp, but if it is one of the usual suspects like NE5532, you most likely missed the "maximum output current" line in the datasheets.

Some opamps will choke on 2k ohms loads (like TL072) because their output stage can only handle a minuscule amount of current, others will work fine in 600 ohm loads and go up to 60mA or even 100mA...

But for a 8 ohm load you really need something designed for the job. If you're a beginner, try a LM1875 for example, it's a cheap and easy to use amplifier chip (just an opamp really, but designed for the kind of current your speaker requires). It also needs a heat sink.

If the thing runs on batteries, consider purchasing Class-D amp module from aliexpress, like IRS2092 or the TI chips.

Not the answer you're looking for? Browse other questions tagged operational-amplifier audio oscilloscope speakers function-generator or ask your own question.

5
Correct Way to Limit Op Amp Output Current
2
Source of Audio Noise at Low Volume — BlueTooth Mini Amp board
8
Parallel speakers sound bad, but serials are fine
5
Operational amplifier output is asymmetrically clipped
8
Unkown distortion in low power push-pull amplifier
4
Which is broken, the amp or the driver of this subwoofer?
0
How do I calculate expected output voltage of car audio amplifier with given conditions?
1
Electric field near dynamic loudspeaker at resonant frequency