I guess you might think that this question has been asked before, but what I need to ask is something very different.

Now I can communicate with the wifi module through TCP by putting the module into ADHOC module. Whatever the module receives over wifi is received by its UART and whatever is written to its UART is transmitted over wifi.

Now when I connect the module to the dongle and plug the dongle into USB port of my laptop, and I use telnet's serial port. Whatever I type on telnet is not displayed. Also to program the module using UART I have to use an escape code which is $ $ $ (i put spaces cauz then text changes). I see that when I type in $$$ into telnet I dont get CMD back from the module which its supposed to when it enteres command mode. Also I receive all sort of rubbish from the module when the USB is plugged in. THere are more strange things happening which I can tell if anyone's interested

Can anyone tell me where I'm going wrong? I have been trying this for past 3 weeks but couldn't get anywhere. What am I supposed to do?

A closer look at the WiFi module circuit diagram indicates that what I have written below MAY be incorrect. Rather than delete it for now until I can look into it further I'll leave it for David to look at as it MAY be useful.

Note that WiFi RXDIN connects to SENS0 on pin 34 and also to URX on pin 12.
This may allow some form of level detect and shift.

References at end should be useful.

If this is what is happening it would explain what you are seeing.
The WiFi unit sees inverted (to it) polarity signals at a level which may or may mot always trigger it's input gates. When it does respond it outputs signals which are inverted in polarity to what the dongle expects and at excessive voltage levels.

The above is easily enough checked by measuring the voltage on TX out at the connectors in each case with the devices not connected to each other.
WiFi module TX out idle

The diagram below is for the "Roving Networks RN131G WiFi module".
Assuming that it is the same as your RN131 - 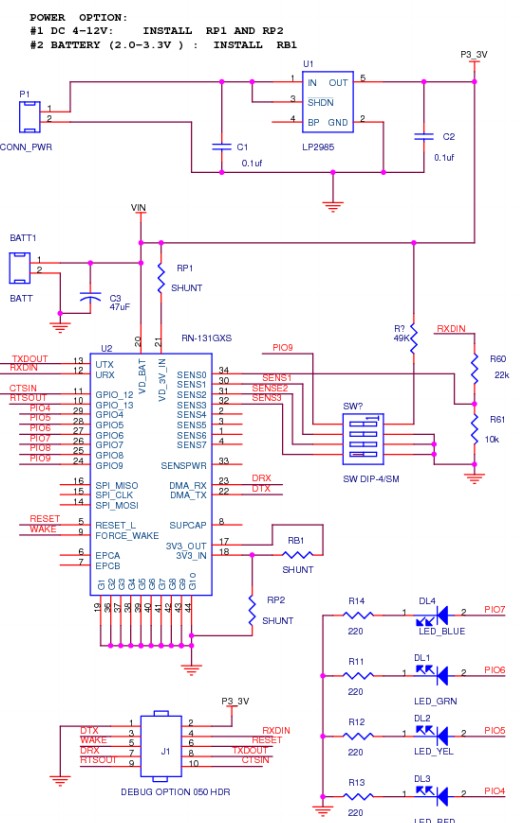 Not the answer you're looking for? Browse other questions tagged usb wifi ttl or ask your own question.

3
Connect UART WiFi module to PC
0
Connection to a USB to TTL dongle
3
Sending data from RN-171 in adhoc mode
1
Where I can find an USB dongle to connect two devices with external power?
0
Problem connecting UART Wifi Module to PC
0
RN 171 (RN-XV Wifly) scan and connect to another IBSS Ad-Hoc Network
2
Why does WiFi Signal strength increases as I touch the Wifi Receiver
0
USB to RS485: Can I connect A to Common Ground?