I'm designing a PCB which uses the ESP32-D0WDQ6 WiFi chip (not the entire module!). I want to add the uFL connector so that I can connect an antenna instead of using the PCB trace antenna.

Now, I searched for this before and found this in a datasheet of SIM9000 which is related to designing a 3G module which an antenna connector: 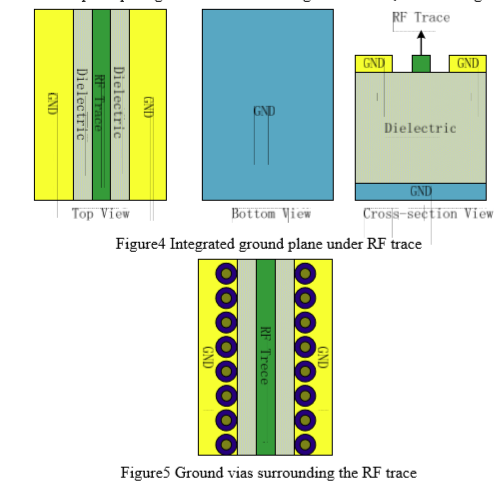 This shows the recommended layout for the 3G module's antenna feed line on a 2 layer board.

My question is, can I use the same idea with my ESP32 chip on a 4 layer board? (I have inner layers dedicated to ground and power plane each)

More specifically, is it needed that the inner copper pours (ground and power planes on inner layers) be left under the antenna feed line and the uFL connector itself or do I have to remove them?

You can use the same coplanar waveguide. You'll want to get Saturn PCB Toolkit to calculate the appropriate geometry for the shorter distance to the inner ground plane. You would be best served to keep this trace on the same outer layer, and keep a solid ground plane under it.

Not the answer you're looking for? Browse other questions tagged pcb antenna ground or ask your own question.