Output impedance seen by the load in this emitter follower

I'm trying to understand what the concept of "output impedance" relates in a simple buffer such as an emitter follower conceptually without digging in formulas.

Imagine the Rload is about to be coupled to the emitter terminal of an emitter follower as shown in the below drawing: 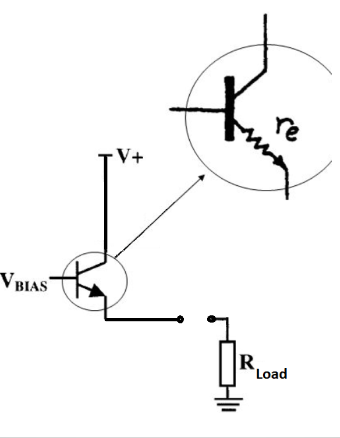 Can we say the output resistance/impedance seen by the load Rload is re(intrinsic emitter resistance)?

I'll just gather up what you may have already learned from the comments. Let me start off by saying... yes, you are approximately correct. The output impedance in the configuration shown is approximately \$r_e\$. G36 specifically addresses this. (This value does depend on the operating point.)

It is modified by any base impedance, though. If that exists (and most small signal BJTs will have an intrinsic base resistance on the order of \$10\:\Omega\$), you have to translate that base impedance to the emitter. This is done by dividing the base impedance by \$\beta+1\$ and adding that result to the value of \$r_e\$. The final equation might look like:

A way to test this in LTspice is to use a circuit like this: 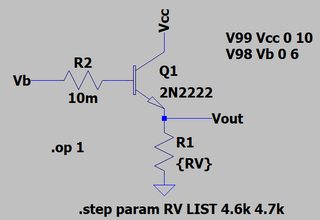 (I've used a picture rather than the schematic editor so that you can see everything I used to generate the next bit of information.)

When you run the above spice simulation, you will get something like the following:

You can see on that plot that I've "dragged out" an area rectangle with LTspice and that LTspice automatically will calculate the slope (resistance) for you. Here, if you look at the text shown near the bottom center of the plot, you can see that it computes about \$22.7\:\Omega\$ for the slope.

Not the answer you're looking for? Browse other questions tagged impedance output emitter-follower or ask your own question.