I've been reading through the LTC1264-High Speed Quad Universal Filter Building Block datasheet but I'm having some trouble deciphering the meaning of some of the variables used in the equations for the different modes of operation. For example, in the image below I have highlighted the variables fi, f0, and fn in the equations that govern the Mode 1b topology. Unfortunately, Linear Technology does not include a "Definition of Terms" anywhere in the datasheet (seems kind of silly). 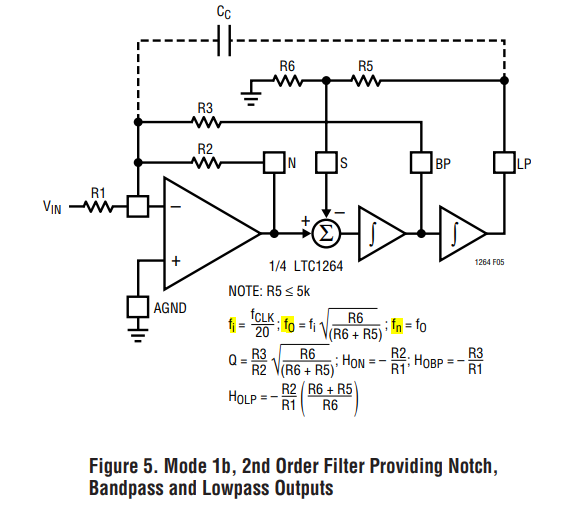 Can anyone tell me what these three variables are? My assumption is that f0 is the center frequency of the filter but I don't have a clue about the other two values. To make things more confusing, later in the datasheet in the "Guide to Bandpass Design" on page 11 these equations are shown: 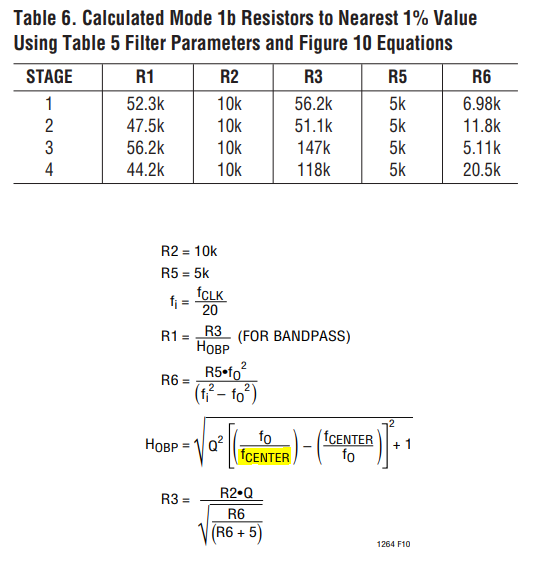 These equations are for the same circuit in the 1b mode. What then is fcenter and why does it not appear int the equations in the previous image?

If you look at the equations right below the schematic you will see that all of the terms are defined: fi = fCLK/20 where fCLK is the input clock frequency. f0 = center frequency of the filter (fo is defined earlier in the data sheet as being the center frequency of the filter). fn = fo. That is enough information to be able to compute all of the required values. It is true that they don't explicitly define the meanings of fi and fn but their values are easily computed from the given equations.

Not the answer you're looking for? Browse other questions tagged filter frequency datasheet linear center or ask your own question.

0
Datasheet for XC34064P wanted
2
designing LC filter for linearizing PWM output
1
Abstract Datasheet Dimension Notation
0
Why are ratios relevant, but not the increments when defining center frequency of a band-pass filter?
0
How to find Steinmetz parameters from datasheet?
1
MSP430 Baud Rate Generation: Datasheet Discrepancy
19
What is the meaning of this datasheet diameter notation?
0
Datasheet electrical characteristics parameters confusion