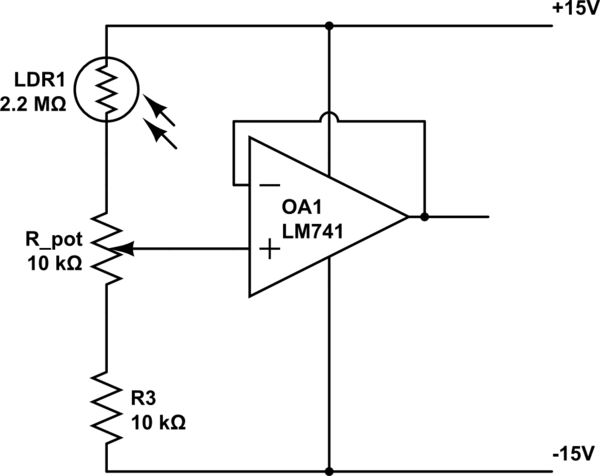 I am a newbie electronics students.

My question is, what does it mean (what happens) when you connect pin 2 to pin 6 on a 741 op. amp., meaning the inverting input to the output (just a jumper cable).

For some reason my circuit works now when I did it, I just did it on accident. Nothing is connected to pin 2, not ground or anything, just pin 6. To pin 6 it's just pin 2 and another cable just to measure the output compared to ground.

Of course I have some other stuff connected to the op. amp., which is a variable resistor voltage divider to pin 3, -15V to pin 4 and +15V to pin 7.

My assignment is to find a linear relationship between the distance to a light source (using a LDR), and the output voltage (or current) of the op. amp.

But yeah, if someone knows anything about my question that would be really helpful, I will probably rebuild my circuit though.

The circuit you have posted is a simple non-inverting buffer.

An opamp provides as output the difference between the two inputs.

An opamp with only one input connected won't do anything reasonable. The unconnected input will "float." It will take on some voltage, and it can vary randomly (or stick to one of the power rails.) So your output (as the difference of the two inputs) will be unpredictable.

You have yours connected as a buffer. In this usage, the output follows the voltage on the non-inverting input.

You use this kind of thing to prevent your measuring device from changing the voltage you are trying to measure.

Consider your myDAQ as a load on the resistive voltage divider formed around the LDR.

Adding a resistor in parallel to any part of a voltage divider changes the ratio.

If the input resistance (impedance really) of the myDAQ is too low, then merely connecting it to the LDR would change the voltage.

The 741 has a higher input impedance than the myDAQ.

Not extremely high like more modern opamps, but high enough that it doesn't noticeably change the voltage from the LDR voltage divider.

So, yes, you need that connection from the output to the inverting input.

That's the difference between a buffer and a garbage generator.

I am a bit surprised that in no answer - up to now - the term "negative feedback" is used. Please note that in your circuit a principle is used which practically in ALL amplifier (and buffer) applications is applied: Negative feedback. By applying this principle a certain portion of the output signal is fed back to the invering terminal - in your case, the feedback factor is "1" because 100% of the output voltage are coupled back.

Negative feedback has many advantages:

0
What is the output of a JFET op-amp?
19
What is the use of an op-amp whose output and inverting input are connected to ground?
0
Why do I get constant DC 2.5V when level shifting +/- 5V to 0-3.3V (LM741 op amp)?
2
What does a TL062 Op-Amp with output grounded and both inputs connected together with voltage divider mean?
0
Why would a 741 op-amp circuit saturate, and can it be fixed?
4
Why does does the power supply in my op-amp circuit need to be connected to ground?
0
High output voltage from non-inverting amplifier without input signal