After my router broke in a thunderstrorm, I am trying to establish surge protection for power lines as well as (this question) for telephone/internet lines.

I found devices such as Tupavco TP302, using gas discharge tubes. It is placed between the TAE wall data outlet and the router. In contrast to others, it has also a grounding cable. I thought a grounding cable would offer additional security to get rid of surges, but...

AC power network is most likely TN-C in Germany as far as I found out so far.

I found the following schematic drawing (Tupavco website) of a rack-mountable version of the device (I can only guess it uses the same technique as my not-rack-mounted device), showing GDT betweeen paired lines, with the center tap connected to ground: 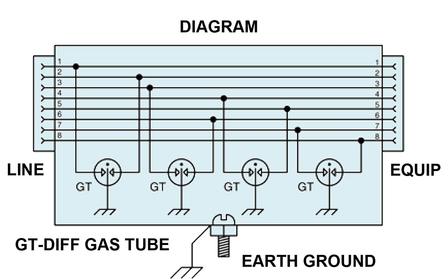 Not the answer you're looking for? Browse other questions tagged surge-protection telecommunications or ask your own question.

2
How can I protect equipment plugged into ungrounded outlets?
0
Why are telephone/internet lines less susceptible to surges than power lines?
3
Using Cat5 for DSL from NID - good idea to double up wires for signal integrity / strength?
0
Surge protector outlet with altered grounding potential
2
Why did these two ethernet switches die (again)?