Can I use a Microwave Capacitor as a Motor Start Capacitor?

Recently I had a garage door opener stop working and it was replaced. I decided to take it apart and realized the capacitor had blown a hole in itself. The motor, despite being about 20yrs old, seems to be flawless. I would like to possibly repurpose the motor for a future project. However I don't have a replacement starting capacitor, but I do have 2 capacitors salvaged from microwaves. My questions are:

What I believe is that there is no harm in using these capacitors to start the motor, and that at most, they will simply fail to get it started. I'm just mainly concerned with any sort of catastrophic failure such as the motor setting fire, or the caps exploding (probably unlikely, but rather be safe than sorry). 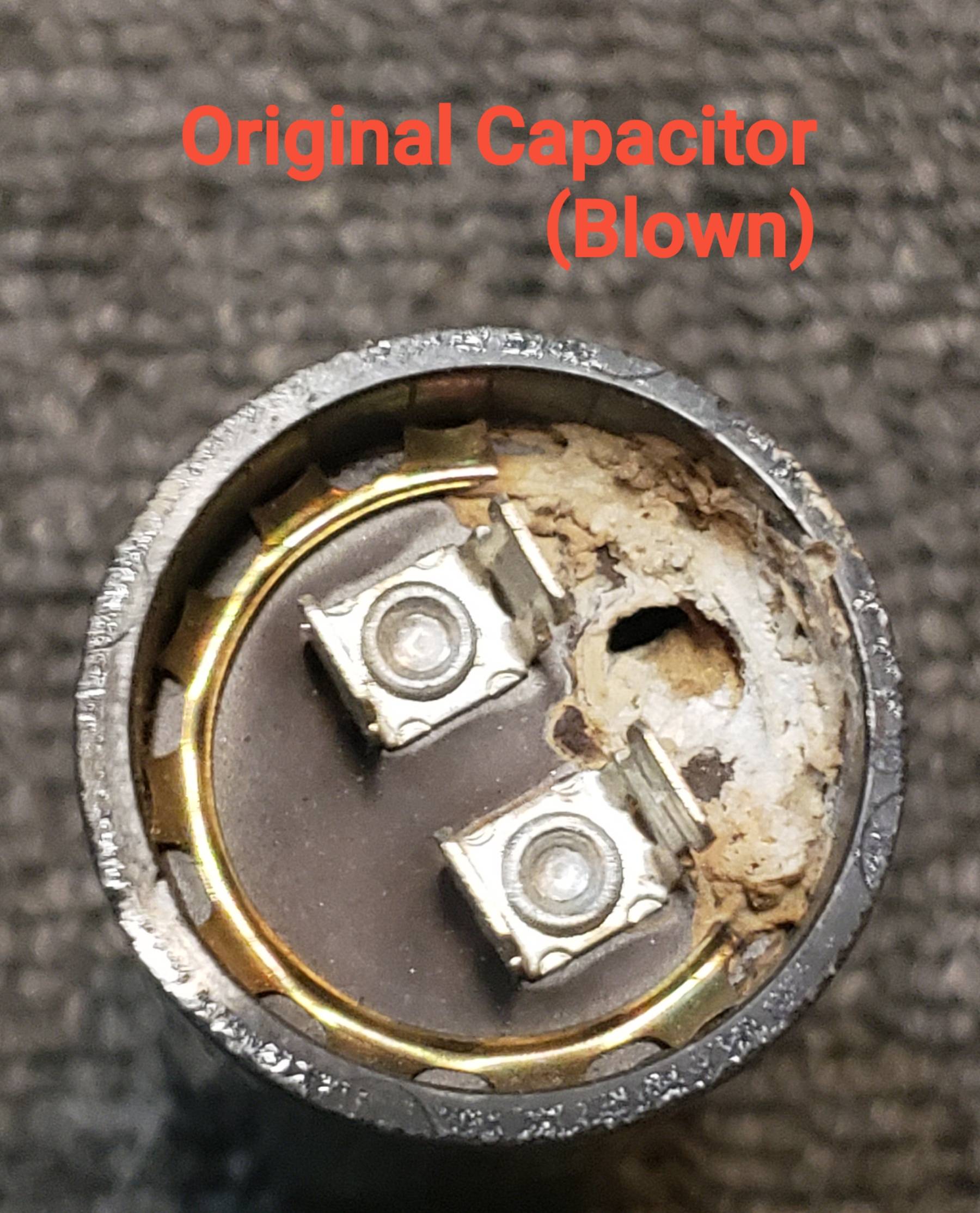 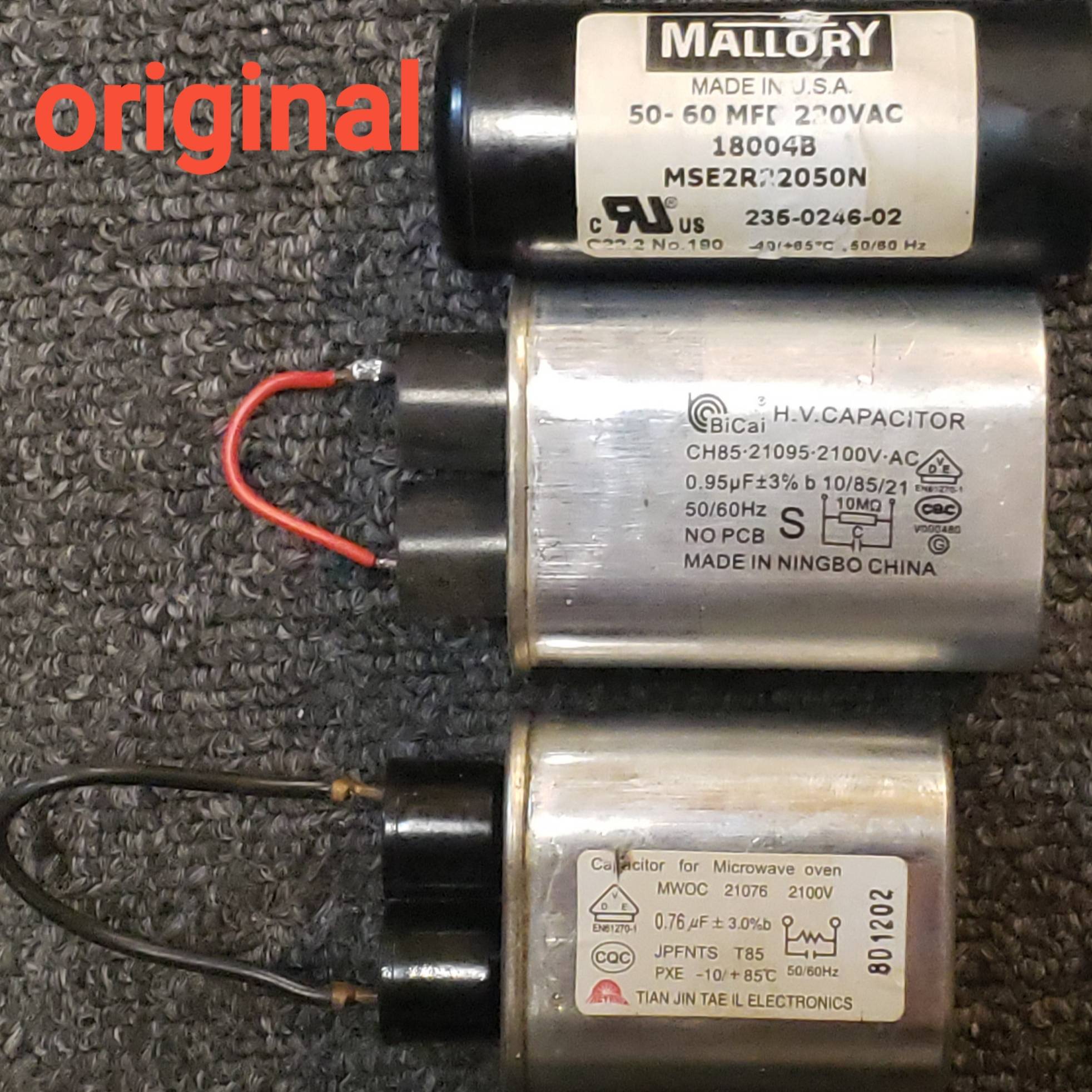 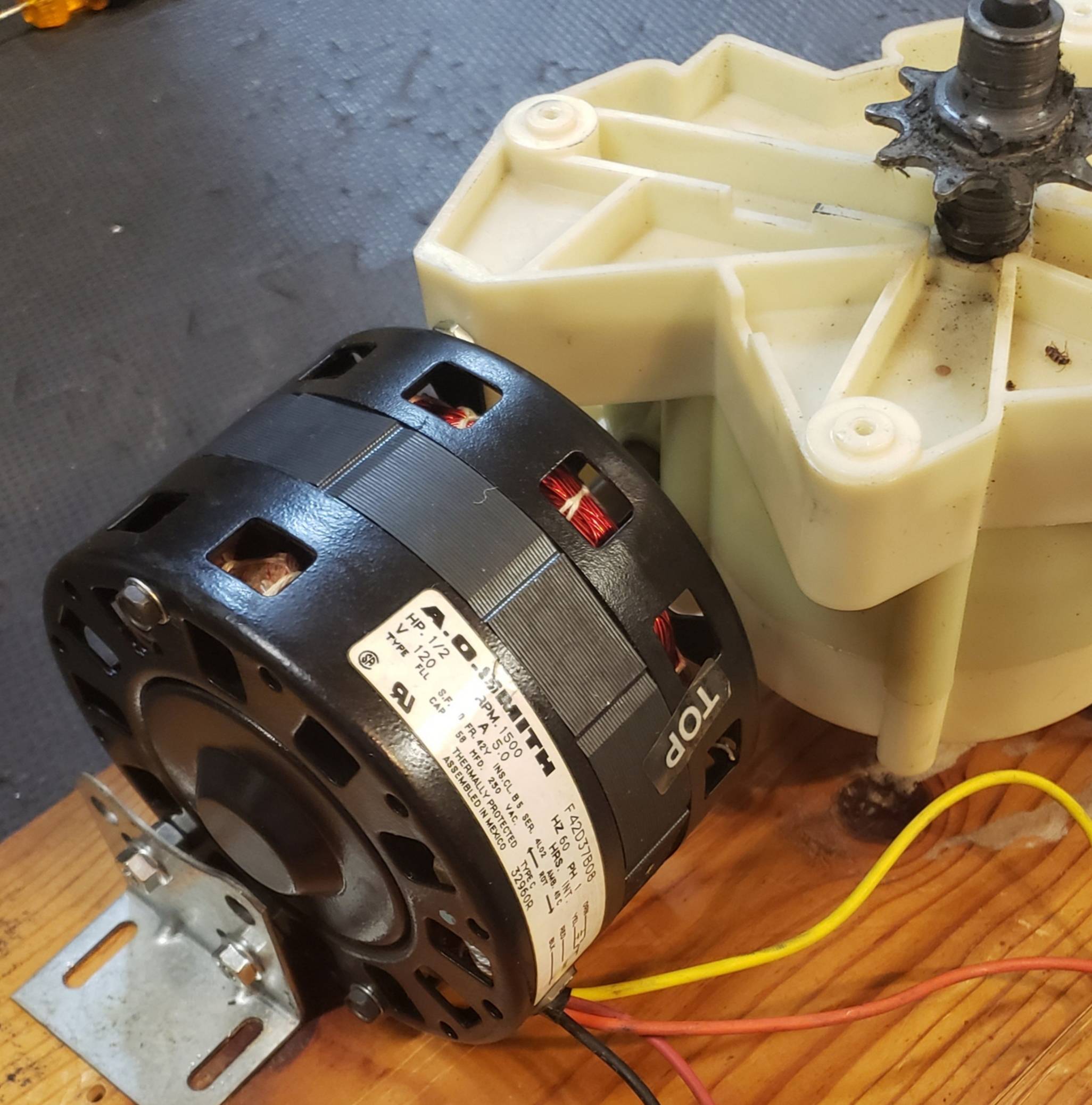 Your original capacitor has a capacitance of between 50 microfarad and 60 microfarad (sometimes abbreviated confusingly to MFD): - 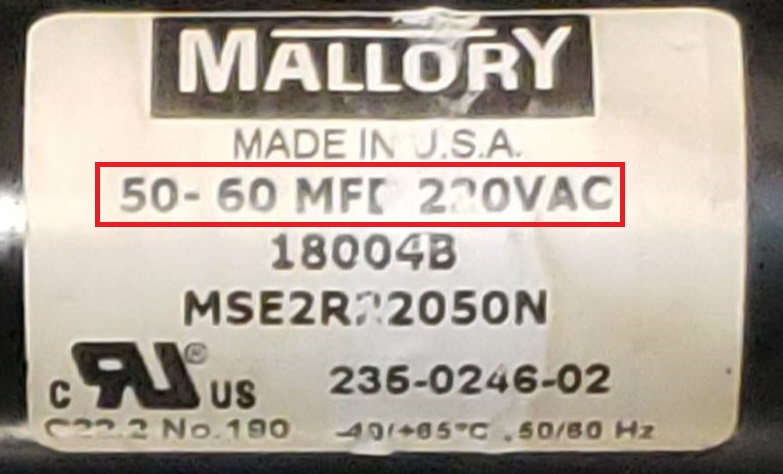 Your microwave capacitors are 0.95 uF and 0.76 uF respectively rendering them useless as a replacement for the original motor start capacitor.

Here's a link to Amazon where you can get a GENIE garage door opener replacement capacitor (apparently, if you believe what amazon say!).

Don't try running the motor without the correct capacitor or it might smoke a bit.

The use of the [inrush-current] tag and the wording of the question seems to imply an assumption that the purpose of the capacitor is to reduce inrush current. That is not correct. The capacitor provides a phase shift of the auxiliary winding current. That phase shift increases the torque capability of the motor in the starting and acceleration part of the torque vs. speed curve (speed 0 to 97%). With any load other than a very easily started load like a fan, a motor with little or no capacitance for the starting circuit is not likely to start at all. In addition, the current in the main winding will be significantly higher than normal until the motor reaches nearly the normal operating speed. As a result, the motor is likely to overheat.

The image below shows a typical single-phase, capacitor start torque capability vs. speed curve. The main winding current will essentially follow the torque curve with a similar "percent of rated" scale. 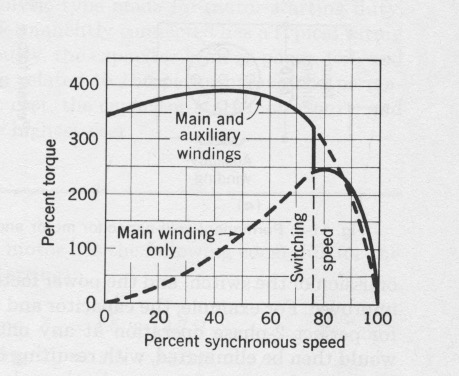 This is probably not a good motor to repurpose. The motor is designed to run a few seconds under load when the garage door is opened followed by a few seconds when the door closes. Note on the label "HRS INT." I believe "INT" means intermittent duty.

The motor uses a starting capacitor design but, because of the short intermittent duty, may not have a centrifugal switch or other mechanism to switch the capacitor out of the circuit. The capacitor may have failed because someone (like a kid) opened and closed the door quite a few times in a row. Stalling the motor would cause a problem, but that would mean the safety shut-off failed. There could be a mode of failure (or multiple failures) that caused up/down cycling.

Another interesting thing about the motor is the 1500 RPM speed rating. At 60 Hz, the next highest synchronous speed is 1800 RPM. That means the motor has 300 RPM slip. That is pretty high and would indicate a very inefficient motor.

Not the answer you're looking for? Browse other questions tagged capacitor motor induction-motor inrush-current .