I found a presentation regarding SMPS and found this slide. 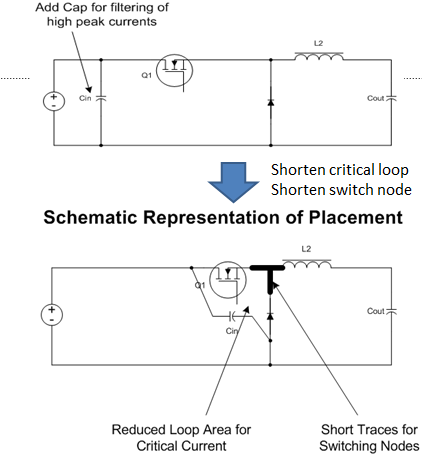 I am not totally able to grasp the concept of the input and output ripple current.

In the above image I have the following questions :

I thought input capacitors are used only for providing a constant DC supply during power interruptions to the downstream circuit. In the first image, it is writter as "Add cap for filtering high peak currents". I dont understand how a capacitor can filter high peak currents. Please explain with an analogy.

Capacitors can't provide DC current when the power source is off but most can provide a high-value current for a short amount of time. Decoupling capacitors are used as an energy tank that is emptied quickly when there is a sudden change of current in the circuit (for instance Q1 turning-on) so that your circuit does not need to source these extra short pulses of current directly from the power source.

If your circuit had to source this extra current from the power source and given the resistance of this path is much higher than the resistance of the path to the local decoupling capacitor, you'll end up with a higher voltage ripple on the input of Q1 (V = R x I, if R is higher then V is higher). You'll also create longer current paths and loops which in turn can generate undesirably high magnetic fields which can couple in the rest of your circuit (eg. becoming noise source for other components).

To ensure that Cin is effectively used when the high peak current pulses happen, it needs to have a low-equivalent resistance (ESR) as, when those pulses happen, you want Cin to be the lowest path of resistance. If not, the switching circuit may source it from elsewhere. MLCC capacitors have very low ESR, a combination of these in the proximity of Q1's drain will act as "low resistance energy tanks" which are very effective in "filtering" peak currents.

I mentioned above that higher current loops create higher magnetic fields, it is true here too. So in keeping the switch node trace short, you'll effectively create tiny current loops and contain the radiated energy locally. If you get loose on that rule, the radiation can travel further and affect the rest of your circuit and/or other circuits near-by. To avoid this case scenario is one of the reasons why most electronics are tested for electromagnetic compliance before they can be sold.

I dont understand how a capacitor can filter high peak currents

The input capacitor provides an unambiguous source of energy during the switching cycle. The level of energy required by the switching circuit can be high over a short period of time and, this can collapse the external input power supply if a capacitor is not used. When that "instantaneous" energy is not being used, the capacitor becomes more leisurely recharged and is ready for the next short-term delivery of energy.

That capacitor also ensures that the bulk of the current flow (when the high energy is required) is contained within the loop as shown below in green lines: -

Why do we need to keep the loop area small?

If you look at the loop above (green wires) you can regard it as an emitter of magnetic fields; the current is sourced from the input capacitor and, in part, dumped into the output capacitor. In effect it's a loop antenna that is made better by doing this: -

Why do we need short traces at switching nodes

SMPS switch at high frequencies to reduce the magnetics. Because of this switching, the current in some traces are discontinuous; i.e. the current switches from some very high value to zero at high frequencies. These currents need to be delivered by your source which can be at some distance. The distance (pcb trace, cable etc) translates itself into inductance which limits the rate of change of current. Therefore we use capacitors which are able to supply these short peak currents locally. So basically the capacitor becomes a local supply which delivers the peak currents which in turn is being replenished by the source with (slow) dc current by your source. This same concept is used for powering IC’s.

Note that the current in the loop formed by the inductor is always continuous, thats why the traces of the output capacitor are less critical.

And the switching node needs to be small because at the switching node as the name implies the voltage switches from some high value (in this case Vin to almost zero when the switch is on. As this happens at high frequency, you have a very high dv/dt which can become a antenna if the node becomes to large which in turn can be picked by other traces, components.

Not the answer you're looking for? Browse other questions tagged voltage switch-mode-power-supply output ripple ripple-current or ask your own question.