Unexpected results in voltage to current converter (simulation is Ok)

The circuit below shows a Voltage to Current converter based on a DAC, opamp, transistor and switches. The last one, allow to have a bipolar signal output. 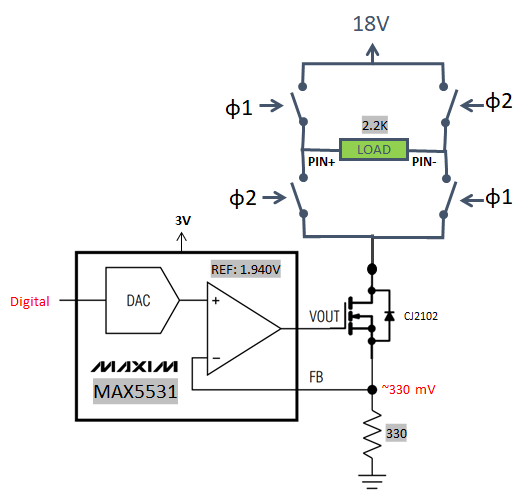 During the experimentation, the DAC is setup to get ~330mV in the resistor (330 ohm) at the transistor source in order to get 1mA current and the LOAD.

The circuit (except the DAC) is simulate (in multisim) with success.

The switches used during experimentation are based on MAX4623. 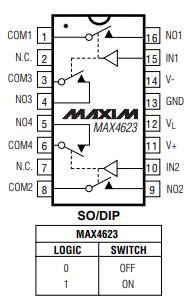 In the real world, there is an unexpected situation when the switch turn on (please, refer to the waveform below). 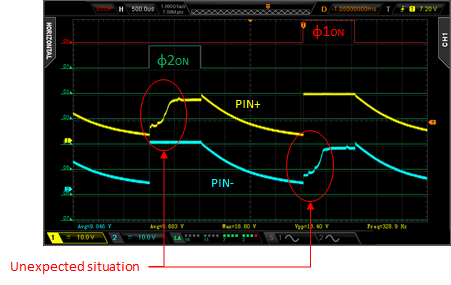 The waveforms of the LOAD (2.2K ohm) are shows in the scope chart (PIN+ and PIN-). Everything is as expected, except the part marked in red color.

The expected waveforms are show below. These waveform allow to have a bipolar current (+/-) in the load. 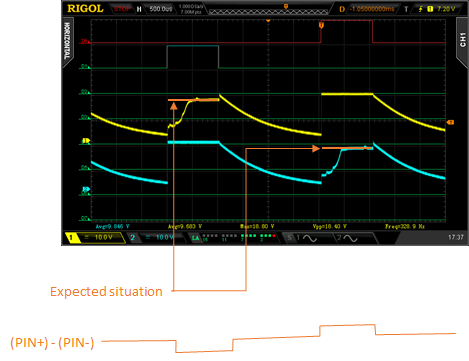 Any suggestion in order to understand the unexpected situation is appreciated. As well as an approach to avoided.

As suggested by Tony, the voltage in the mosfet source has been reduced to ~110mV. 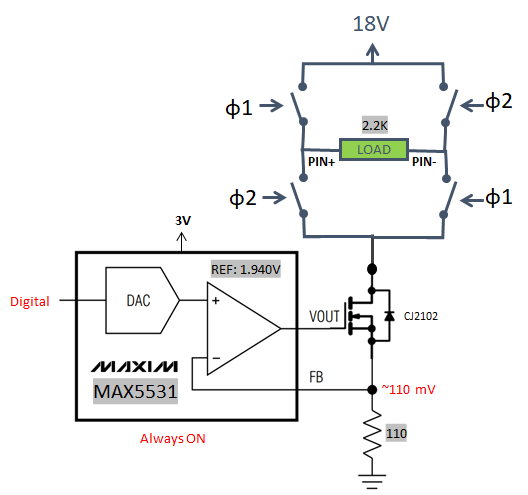 The results in this experiment change a little a show the waveforms below: 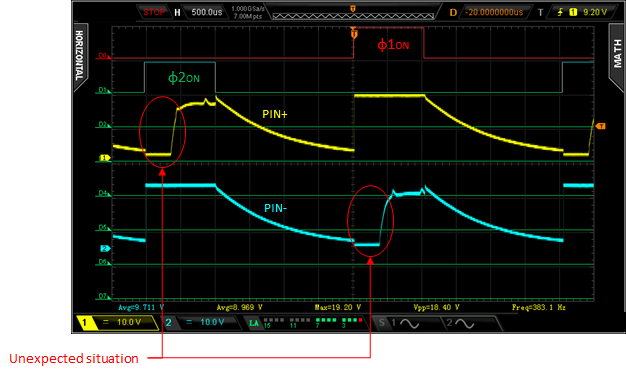 As suggested by Spehro, a switch could be added to avoid the op-amp to saturate. 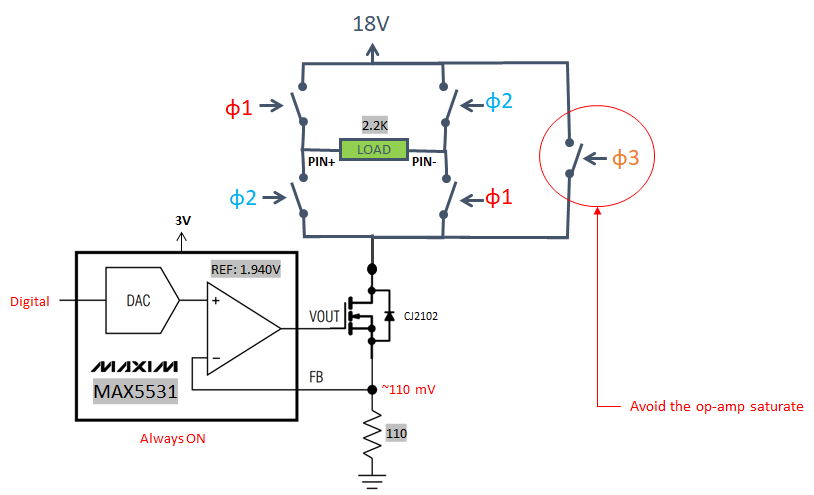 Below the proposal and expected signals. 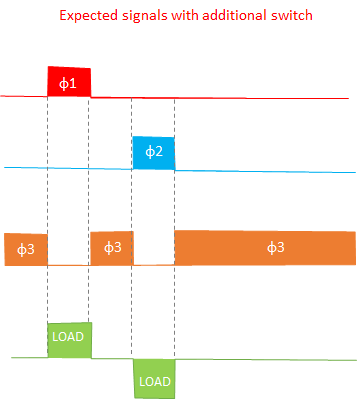 Below a proposal using a current mirror, following Tony and Spehro suggestions. 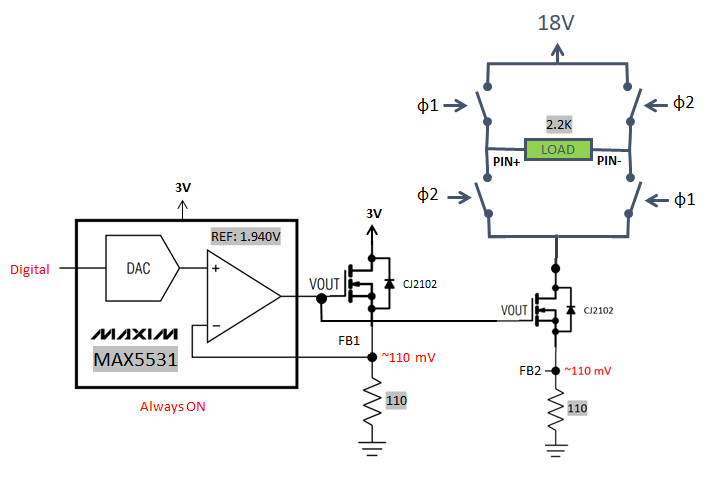 The waveform results improved with this proposal: 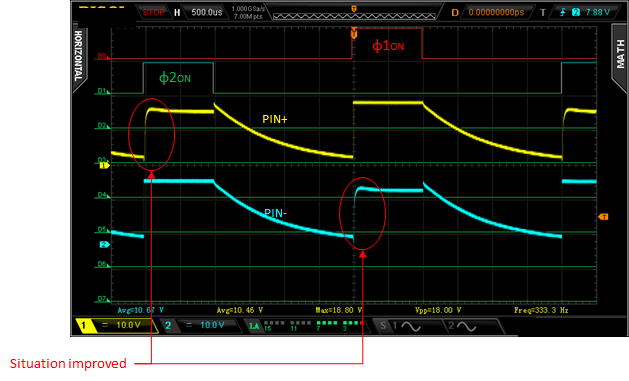 However, there are some not desired situations: 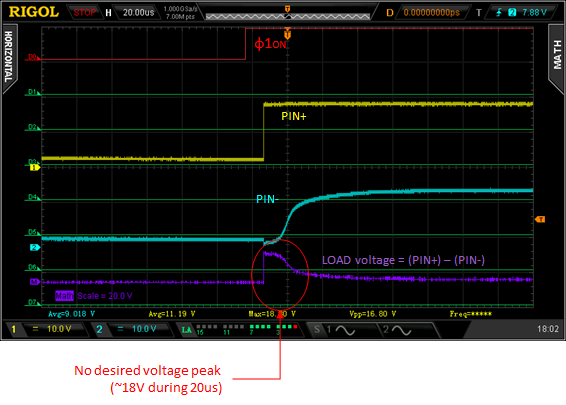 As suggested, the unexpected situation is explained by the setting time of the op-amp. In summary, once the transistor turn on, the op-amp need time for adjustment (with the feedback). To solve this situation, the transistor is keep ON in order to allow the op-amp not saturated. One solution is presented in the proposal (see previous edit), where an additional transistor is added (making a mirror).

Assuming your timebase is 500us/div, consider that the settling time is listed at 660us typical and the slew rate as 10V/ms.

You may do better if you short the current source to +V during the 'off' periods so the op-amp does not saturate.

It is certainly unusual and suggests your high side analog switches are high impedance. Check that they have adequate gate voltage. Try CD4066's or similar for your experiment.

Reality is complex since the schematic does not show all the stray capacitance and protection diodes and unexpected results occur. 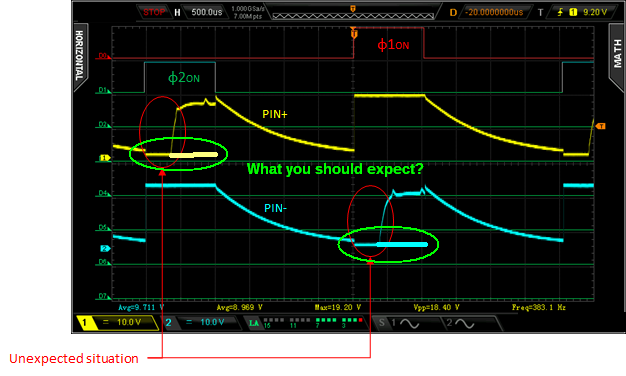 The switches complement the polarity of current to the load but then go to Tristate (unknown charge voltage) This does not seem practical and is neither a Sample and hold, nor a switch capacitor design, but something that does not behave properly with high impedance charges.

Not the answer you're looking for? Browse other questions tagged voltage operational-amplifier mosfet current converter or ask your own question.