What datasheet should I trust for TIP 35 and 36?

I'm trying to refine a SPICE model for TIP35C and TIP36C and I'm looking for some trustworthy curves to supply points for the model wizard.

I found the models here, but they seem not to be working properly on MultiSIM for some reason and the gain seems kinda larger than what I saw on some datasheets back then.

Then, checking again, I saw the datasheets don't agree with each other.

The datasheets from ON Semiconductors and Motorola both use this same graph for this pair (actually the whole datasheets are exactly identical): 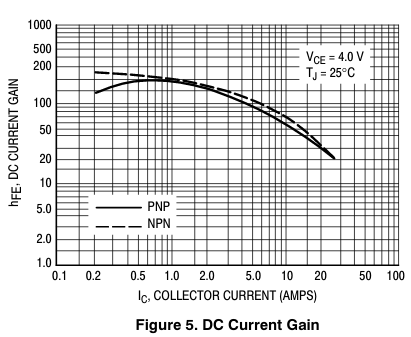 This graph has some issues. The values at the side of the axis are pretty off. Take for instance the Y axis, it has 3 major ticks at 10, 100 and 1000, and the minor ticks between them correspond to 2 to 9 times the value of the last major tick, as it's standard in those base 10 log axis. But the values on the side don't match their respective ticks at all.

Anyway, correcting that, I reverse-engineered the graph to find that the max hFE in both reaches around 300, and the values on that curve don't quite match the values the datasheet itself says it has on some points (it says the typical gain at 15 A is 40 but in this curve it's over 60 for both transistors).

These datasheets also lack a VBExIC curve, which I needed. Then I found two other datasheets, this time from Power Innovations and Savant (which use 2 slightly different but greatly matching graphs) where the hFExIc look like this for both transistors of the pair: 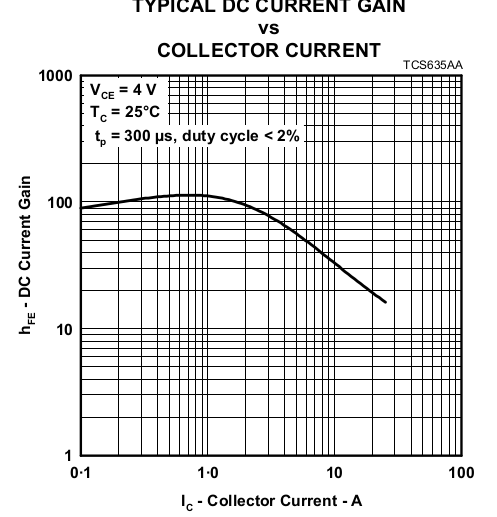 My question is: Which of both is more trustworthy?

I know the second one use a pulse technique, but 300 us looks like a quite long pulse for me. Could all this difference arise from that alone?

And even then, which one should I use in the model wizard?

You should know that the current amplification factor \$\beta\$ or \$h_{fe}\$ is of bipolar transistors almost never has a very predictable value.

The measured plots that you find in the datasheet are for a "randomly" selected transistor. I write "randomly" because of course they will choose a transistor that has a \$h_{fe}\$ that is very close to the average value that the manufacturer expects. In a simulator model you will also get a value of \$h_{fe}\$ that is typical and average.

By no means can you expect that all the transistors that you buy, even if they were made by the same manufacturer, will have a \$h_{fe}\$ that is close to the typical value. The manufacturer could only guarantee that if they would measure each device and sort the transistors on their \$h_{fe}\$. Then a lot of transistors would then have "a un-typical" value for \$h_{fe}\$ and the rest would have to be discarded. That would make the remaining transistors very expensive!

But is it really an issue that \$h_{fe}\$ isn't very perdictable?

I would reverse it and state that if your circuit design needs a transistor with such a tightly controlled value of \$h_{fe}\$, then you're not doing a good job as a designer.

In most commonly used circuits, generally only a value of \$h_{fe}\$ that is too small will be an issue. When \$h_{fe}\$ is too small then it is possible that the transistor will enter linear mode when it needs to operate in saturation mode for example.

If \$h_{fe}\$ is larger than expected, usually only less base current will flow and that generally is not an issue. So what experienced designers do is figure out what minimum value for \$h_{fe}\$ they can expect and then design their circuit for that value.

TLDR: You should trust the datasheet of the manufacturer of the device that you're actually using. If you're using devices from many manufacturers, trust all of them to be true and look for the minimum value of \$h_{fe}\$ and that's the value you should be using in your design.

Take that hFE reading at 15A. Starting at 10. the SECOND line is labelled 20 (the first is approximately the right place for 15). Then the next three are 30,40,50 ... and the curves intersect 15A approximately on the 40 line, as the datasheet says.

It's no surprise that ON Semiiconductor and Motorola datasheets look the same ... Motorola's discretes division was renamed ON Semiconductors.

the other brand shows a lower gain transistor ... but crucially, as Bimpelrekkie points out, the difference is well within the expected spread of gains among bipolar transistors.

Not the answer you're looking for? Browse other questions tagged transistors bjt datasheet or ask your own question.