How can I adequately recreate a signal with a biphase line code after band-pass filter in python?

I want to create a python model of a transmitter. The transmitter uses a biphase line code, which looks like this (from a datasheet):

Additionally, the datasheet states that the signal is "passed through a bandpass filter which conditions the signal for the line by limiting the spectral content from 0.2 fBaud to 1.6 fBaud <...> The resulting transmit signal will have a distributed spectrum with a peak at 3/4 fBaud."

The resulting pulses at the actual transmitter output look like this:

How can I adequately reproduce this resulting signal shape in python? 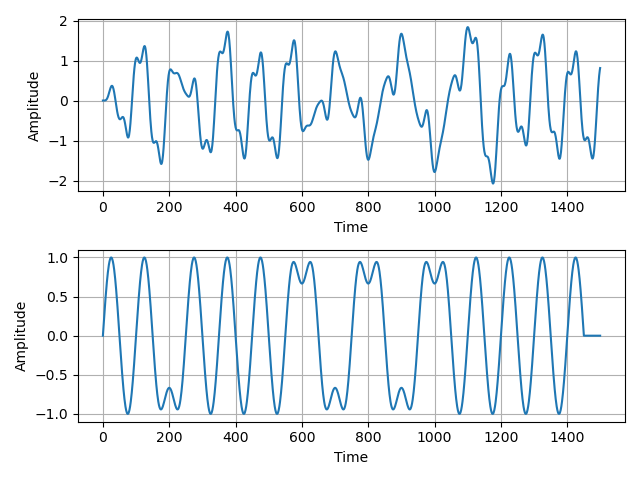 From your 2nd picture it looks like you need a linear-phase FIR, as opposed to an IIR. The main difference is that FIRs can have perfectly linear phase, thus a perfectly flat group delay, which means all the frequencies are delayed by the same amount, while IIRs have non-linear phase by design, thus a nonlinear group delay, resulting in smearing in time domain.

You linked to Python's least squares FIR, and that's a good start. If the coefficients need to be calculated in real-time, the algorithm might pose problems, because it involves a bit of math, but the closest alternative is the Kaiser window (which is a closed form converging towards a LS). I am not very familiar with Python, but I'll show a possible filter that you could use.

The order of the filter is directly related to the transition width, and for an LS there is no closed form, but the LS and the Kaiser window come very close in terms of response, and Kaiser has a known formula for determining the order. Considering an attenuation of 60 dB and a sampling of 8 Baud: 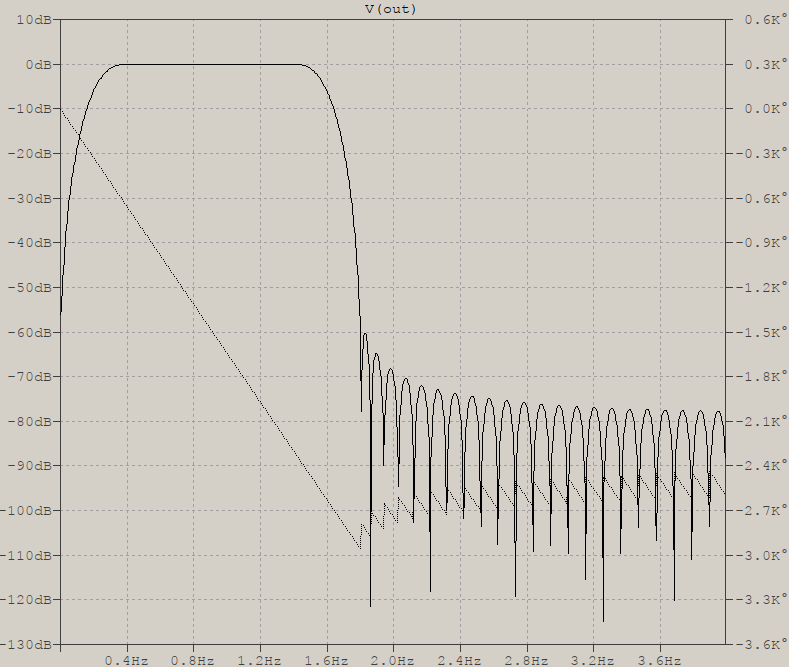 And some random sequence, vaguely similar to a bi-phase differential encoding: 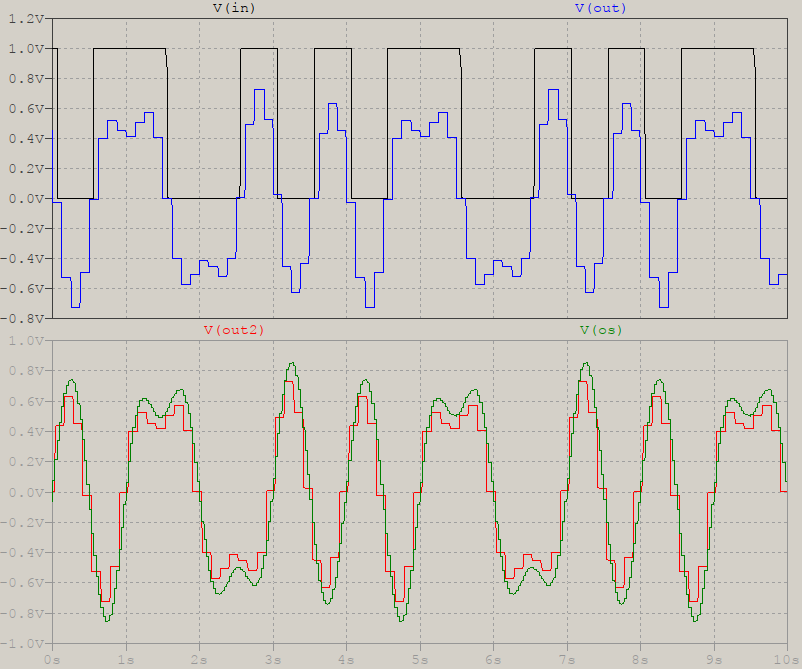 The output seems to wobble a bit because of the transient response. If the input were steady for more periods, it would stabilize. Anyway you look at it, it gives a correct band-limited signal, that looks much like what you have in your 2nd picture, except less smooth. Note that I have no idea what signal is used there, if there is oversampling or not, or whether that's the analog output for the sampled version of the signal. This is meant to show that it's a linear phase filter that's needed in order to correctly preserve the shape of the signal. Otherwise, considering a 4x oversampling, the difference would look like what you see in the lower graph, in the picture above.

Finally, as I'm not very familiar with Python, in Octave, a Kaiser window FIR can be designed like this:

You could also concoct a signal and use filt(), or conv() to show the response. I already did it above, but here's what Octave shows for a similar pseudo coded input:

In a similar fashion you can use firls(), or remez() if you want equiripple, or whatever other filter, but, unless you have a different plan, you'll most probably need linear phase. You've seen what happens with a Butterworth filter, which is an IIR. As a last example, here's how the same input is filtered by a 5th order inverse Chebyshev (to try to match the frequency response of the FIR), and how the 4x interpolated shows up: 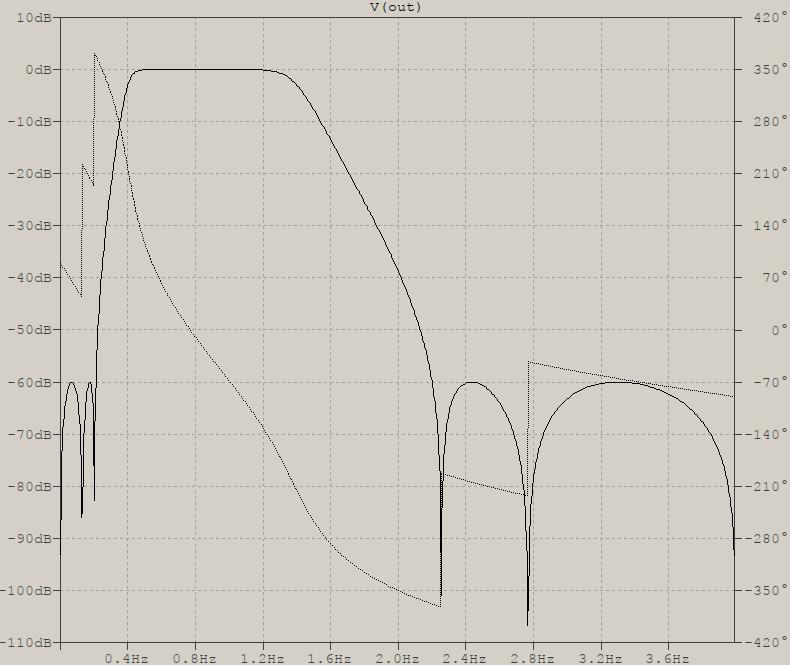 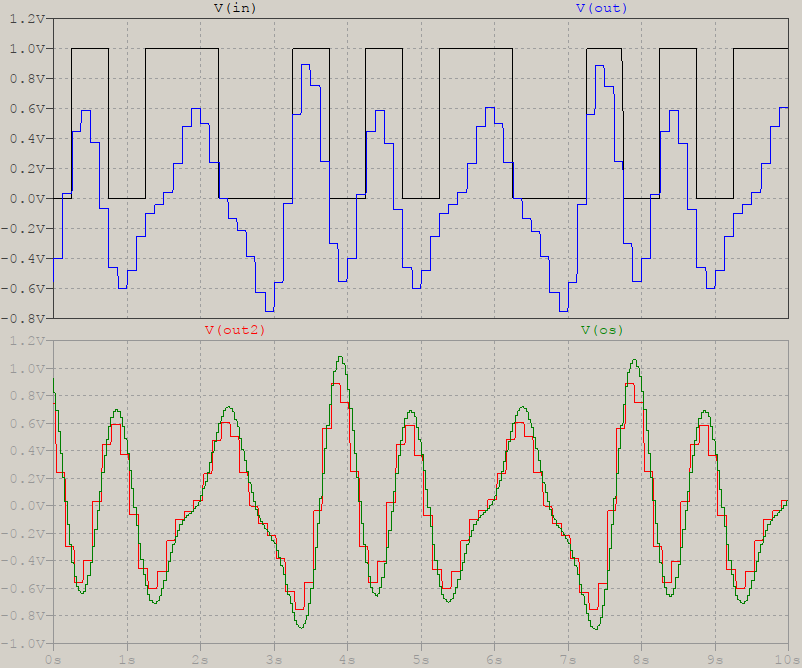 Well, I think I made some progress in Python with the Kaiser window FIR:

As an addition to the answer by a concerned citizen, here is a python code for the FIR filter with Kaiser window to be used with the original python script in the question. The important note here is that the baud rate for the biphase line code is a half of a "symbol" rate, i.e. by setting the frequency of "symbols" (symbol_f) 320 kHz we get a baud rate 160 kbit/s.

Not the answer you're looking for? Browse other questions tagged signal transmitter modeling python or ask your own question.

3
Band-pass filter with a given impulse response (Matlab)
1
How can I filter out sunlight on a solar panel so that I can read a signal from a red laser?
2
How can I model an optical filter using python?