Suggestions for possible cause of impedance mismatch between board revisions?

I have a version of an 870MHz RF front-end based on the CC1190 PA/LNA based on an existing design that was ported to another PCB, manufactured and assembled for eventual use in a prototype. We'll call this revision A. The boards for rev A were manufactured and assembled, and eventually retrieved and tested for correct functionality and possible bugs etc. The hardware bugs on the board were tracked down and eventually another PCB revision was made, we'll call this rev B.

The B boards came back from manufacture and further testing was done to track down other potential problems etc. One problem that remains unexplained is the measured impedance mismatch on the front-end input, on the SMA connector. The VNA measured SWR / S11 between the revision A and revision B boards is significant, even though no major modifications were made to the routing, and certainly no changes to schematic / BOM values were made as they were not the target of debuging. This is because this part of the circuit was carried over from another already working circuit, so there was “no need to fix something that wasn't broken”.

Alas, now there IS something broken on this part of the revision B of the PCB that was not initially the case on revision A ?!? Between A and B, I am looking at an SWR difference of 2 and 5,9 respectively and an input impedance of 43-j41 Ω for A vs 9-j12 Ω, 12.2-j14.5 Ω and 11.7-j12.8 Ω for 3 boards of B at 870MHz. This was measured with a VNA calibrated to the input SMA connector reference plane, with the LNA of the front-end activated as if it were receiving. Between the SMA connector and the RF front-end there is less than 2cm of microstrip, including pasive 0402 components etc. This impedance was measured due to the prior observation, on about 8 boards of revision B, of a lower output power than usual, and a lower LNA gain in reception. I have not measured the SWR of all 8 PCBs but I am assuming there will be similar impedance mismatches to cause the lower output powers (about 3dB less than expected). Now, an SWR of 2 is reasonable if not the best, but SWR of 5,9 is bad ! This is confirmed by the 9-j12 Ω which is way off the 50 Ω target the front-end was designed for.

As I mentioned, this part of the circuit on the PCB was not one that required any modifications, but of course there were some minor shoving around of ground vias to make room, and/or routings underneath the RF ground plane but mostly > 95% of the routing of the RF front-end part was untouched between revisions A and B, including absolutely no changes to the RF circuit components, values or tolerances etc.

I have considered the following possible reasons with some more likely that others, and some more difficult then others to prove or discount :

So here are some possible causes considered that could see this vast change in SWR from one revision to another, but I'm sure they may not be the only ones. Any other suggestions would be extremely helpful and welcomed.

Any suggestions as to why one might see such a variation in SWR from one revision to another, knowing that the original design was made for 50 Ω nominal impedance, and on several initial boards (such as revision A) this was measured to be close enough to 50, but not on revision B ??

Below is a superposition of the two routs A & B of the front-end, showing minor differences (where dissimilar colourations). Ground-plane vias are micros 1-2.

Below is the schematic common to both routings A & B. 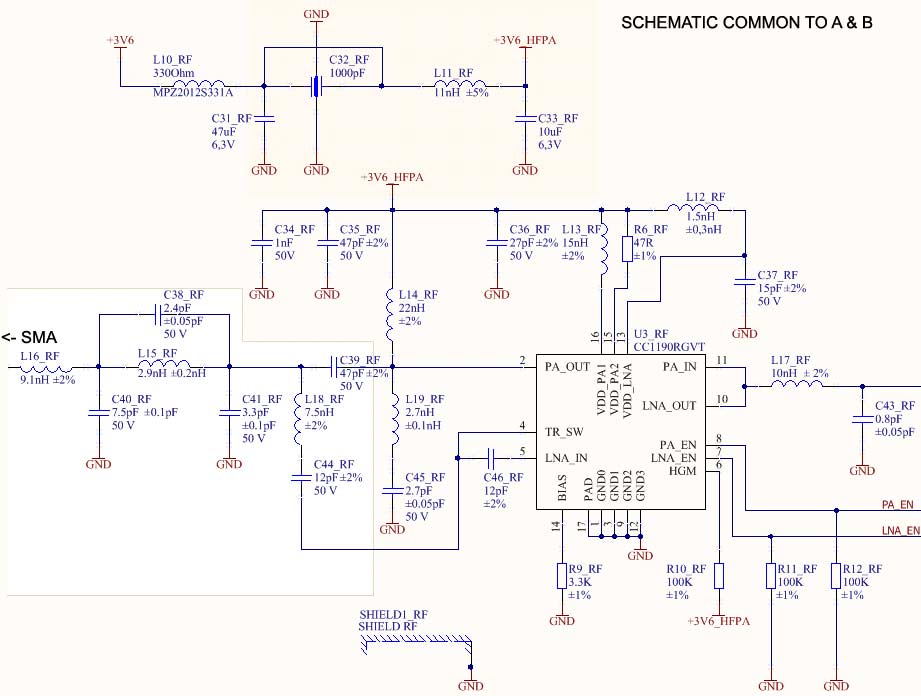 And what follows is the side-by-side layouts of the top layer for A & B. Bottom layer is shown for version B as version A just had the large cap next to the ferrite. Otherwise there are no components on the back. 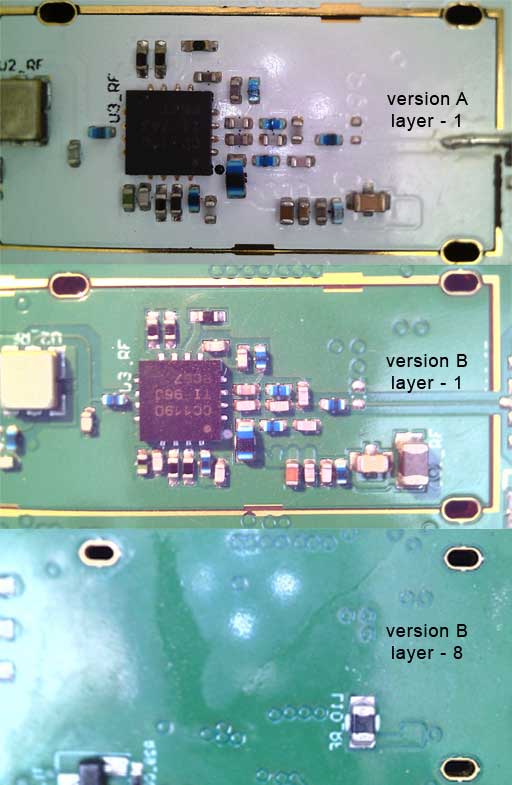 If this may interest you, after further elimination of all other possible causes, I got stuck into the output connector on some bare boards to reproduce a similar difference, but this time with simply a 50 Ohms 0402 resistor as the first shunt element to act as a load at the end of the micro-strip line. This also gave vastly different results, above 10% anyway.

After some calculations and simulations I realized the 1.3mm wide solder pad for the SMA edge connector was adding a 10 ohm section of transmission line to the otherwise 50 ohms line.

This in combination with the other parts of the circuit resulted in a significant alteration of the total impedance from connector to the amplifier resulting in a bad SWR, return-loss etc.

I fixed it by replacing the SMA with a smaller footprint connector which was an option on the board but not originally installed. So, yes the other previous board had an SMA edge solder on directly on the fine microstrip line that had its solder mask removed, so there was no SMA pad to introduce this extra low impedance line in series.

Don't trust them. Bad component placement could have a dramatic effect, so it's the first thing you should check. You should test all the capacitors and inductors in the antenna circuit. For a quick test of the inductors, measure their DC resistance. It should be the same on both boards. Capacitors will probably have to be removed for testing. You could also try removing the parts from a good board and transferring them to a bad board (and vice versa).

I think it is highly unlikely for IC damage to cause the same impedance change on all 8 boards. In the comments you say you replaced one IC and the impedance was still not corrected, which is further evidence that the IC is not the problem.

Yes, it's possible. However, assuming vias are the same diameter etc., I don't see anything on your boards that would explain such a large impedance difference. On the B board a capacitor (C34?) has made the top ground plane narrower as it goes past the output, but I doubt this would have a large effect.

It certainly would. It would also increase capacitance of the traces between the pads, and reduce inductance of the vias.

...assuming your calculations are correct. But 0.16/3.3 is 5%, and if your copy of the original design is already out of tune then another few percent might make a significant difference. Changing the substrate thickness is not something I would do if simply copying an existing design.

One more thing you might want to consider is that the boards have different solder masks. Solder mask introduces dielectric loss, which can vary depending on thickness and formulation.

Not the answer you're looking for? Browse other questions tagged rf impedance surface-mount or ask your own question.

1
Impedance matching at the boundary between two PCB's
1
highfrequency signal on ground
1
Board to Board connection for RF and high-speed digital signals
3
Wi-FI Antenna DC Blocking Capacitor
2
RF - sma pth connector impedance matching to cpw
0
How to do via fencing of an RF trace with a 5V front copper plane and a GND back copper plane?
9
What is wrong with my 50Ω microstrip?
1
Properly grounding an SMA connector (bottom ground plane only)