I watched and was inspired by the following video.

I have a Bachmann 49 Santa Fe locomotive. It's older yet is largely the same as the 4-6-0 models. I am also very much a novice when it comes to components and electronics. I am mostly self taught via various personal projects and tinkering with LEDs and Arduino.

I understand the concept of using diodes to create directional lighting. I purchased SMD Leds (0603).

I corresponded with the fellow that made the video. He had this to say:

LEDs are quite a bit different than old-fashion incandescent lights. Two keys - the LED needs a certain voltage before it will emit decent light (3V for example), but an LED also needs to have its current limited (somewhere in the 10mA to 20mA range). The simple method is to add a resistor in series to 'drop' the rest of the power supply voltage and to limit the current. The problem with trains (using simple variable DC power supplies) is that the voltage varies so much. IF the supply voltage was fixed at 12V, then a 1K resistor would drop 9V and limit the current to 9mA (I=V/R = 9/1,000 = .009A or 9mA). The question is, what about when the loco is going slow? You could decrease the reactance to 500 or 400 Ohms.

I understand his points yet I do not know how to move forward. I'd like to at least be able to use the LEDs, even if I do not have directional lighting. Please advise what method or components I might need.

This is a pretty simple and cheap constant current circuit: 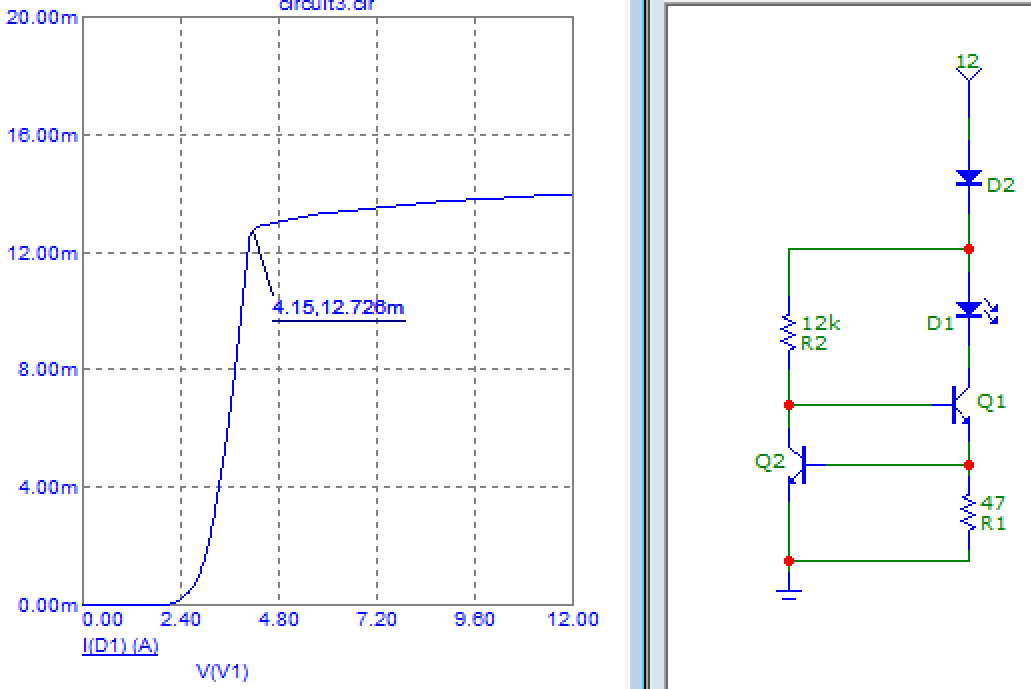 Although LEDs are diodes they won't tolerate reverse voltage above 5V usually, likewise transistors don't tolerate reverse B-E voltage above that, so I've added a diode D2 which will conduct only when supply voltage is positive to protect the other components. For front and back light you need one circuit like this one for each light, but the one for back light should be connected to the power supply in reverse polarity so it lights when the voltage is negative.

The interesting bit about this circuit is low overhead voltage, it will only add about 1.2V on top of LED voltage.

This all assumes your rails carry DC, not AC. If they carry AC, the approach from the video doesn't apply at all.

The truth is that you need a constant current supply² to make an LED emit a constant amount of light. Having constant voltage and a resistor in series is in effect that¹.

So, you build a constant current supply.

Considering you need to be able to solder this (I'll go ahead and assume you've not soldered that much), a "dated" method of doing that would be much preferable to a small or effective one.

So, the famous LM317 constant current regulator it is: 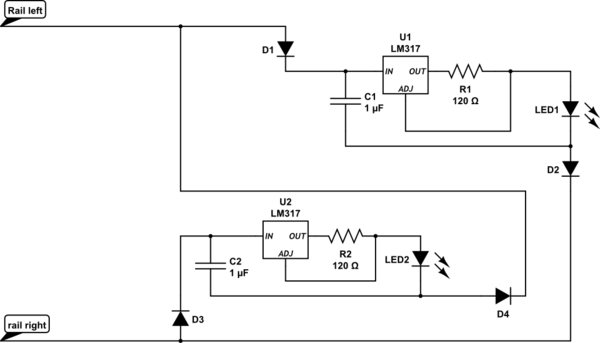 The LM317 is an adjustable regulator, whose sole concern is that the voltage difference between its OUT and ADJ is 1.25 V. Using 120 Ω between these two terminals means that a current of a little less than 10 mA must flow.

Now, since the 10 mA must go somewhere, they flow through the LED. Which then is lit by a constant current - exactly what you need. Note that you can put multiple LEDs in series where I put just one – as long as the sum of their forward voltages is more than ca 3V smaller than the rail voltage.

¹ approximately, at least. The LED's characteristics change with temperature, but that's out of scope here.

² The claim "needs a certain voltage" is just a "proxy": The current, which is what causes the emission of light, through an LED is an exponential function of voltage. Hence, it's a pretty good idea to regulate the current rather than the voltage – make a small error while regulating the voltage, and you suddenly have LED-busting much current due to the exponential function nature.

Not the answer you're looking for? Browse other questions tagged led diodes dc variable train or ask your own question.

11
What makes some commercial JFETs asymmetric?

1
How to calculate ripple/smoothing cap for vintage motorcycle LED headlight conversion
4
How do I find out which current/voltage to use for an unlabelled LED panel?
0
LED forward voltage - why does series resistor take excess voltage?
1
can i use 4 3v coin battery for a 12v grain of wheat led bulbs
1
Is this a feasable method for using 12VDC LEDs as power indicators?
0
What is the best way to design voltage monitor with tri-colour LED?
0
Zener diode question in simple LED circuit with anti-flicker for model railroad
0
LED panel wiring
1
Trying to replace LEDs in lighting fixture - new LEDs just blink
0
Why don't mass-produced LED chips burn out right away?