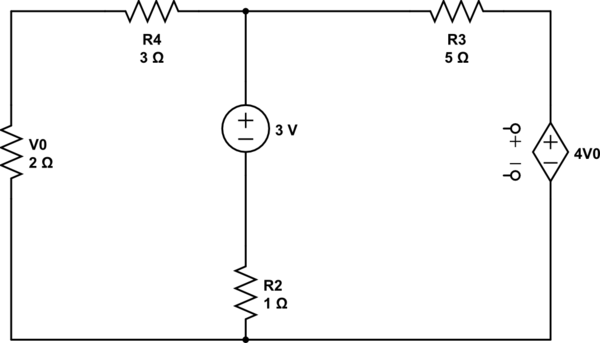 I'm currently doing a question and it appears to me that the direction of the current matters.

For both the batteries I've assigned a current direction that goes from the - to + terminal. So both batteries push the current into node V1 and the only exit is via (V1-0)/5.

However, I keep on getting it wrong. It appears to me that the current direction matters! But everyone online states that is not the case! 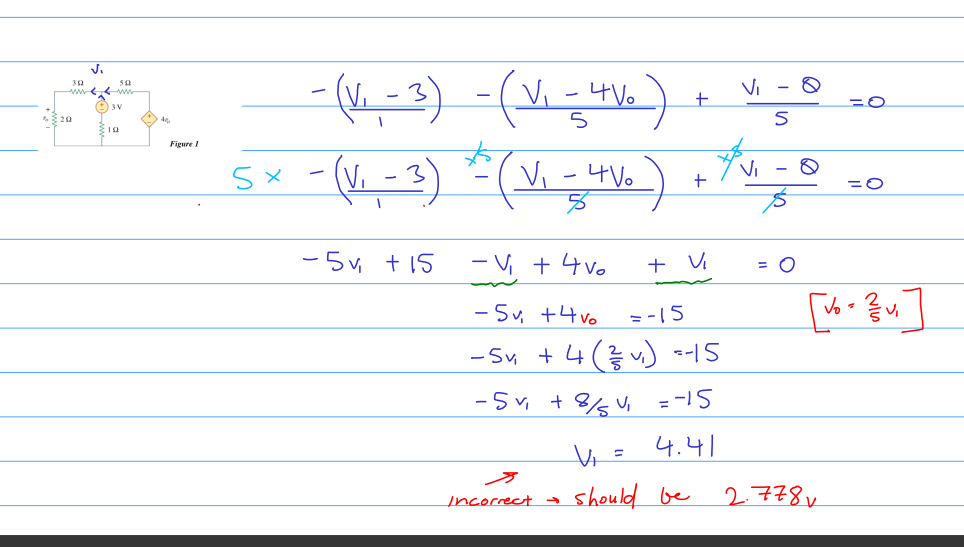 Could you please explain to me where I was not consistent?

First off, already redraw the schematic using rules I'll add as an addendum below: 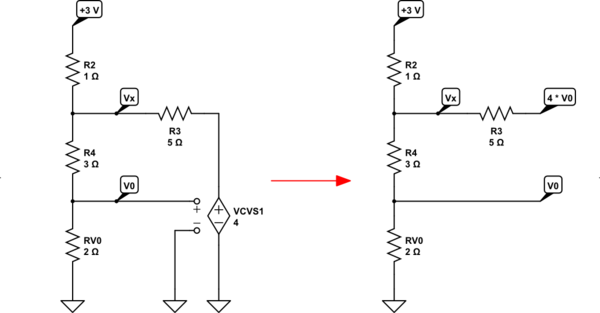 Note that you can choose to make any node you want to, ground. Here, looking at your schematic all I did was to swap the series positions of your \$3\:\text{V}\$ source and \$R_2\$, before making a decision about my choice for ground. The rest, above, just flowed out from that decision.

Note also that the voltage-dependent voltage-source is now more easily understood in terms of how it operates, too. And it was then easier to just get rid of it and replace the nodes, as shown on the right.

It really helps simplify the viewpoint if you'll just take a moment and learn how to redraw schematics for clarity. See the addendum below for some guidance.

I prefer teaching my/Spice's method for nodal analysis, as it uses an important, highly simplifying viewpoint. You'll make fewer mistakes, early on, using it. (I'll add another note on that below, as well.)

In fact, your mistake makes my case! It's just far far too easy to get the signs wrong when applying the usual "nodal method" taught in most books. The method I apply is the one I took from reading Spice code, many years ago. It's what Spice does. And it's a very very good idea to follow it.

Watch, here below, and then read the addendum below on KCL:

(Spice uses this method as it processes each node in turn and does so, emitting the left sides of the equations as shown. The right side is then trivially also generated by the code. But the viewpoint, explained below in my addendum, is the product of my own thoughts.)

With regard to your own question about where you went wrong, I think you can now find that out:

All I did was to move fractions from the right side over to the left side. Now check the new equations and all the signs above against your own equations and I think you'll "see."

I promise you. You'll make fewer mistakes and have less confusion all around if you will do two things:

The KCL equations may appear to treat node voltages as if they don't have to be differences, but can be absolute values. However, that's not really the case here. In fact, I'm just using superposition (which is easily seen once you've really had the concepts deepened into you.) This is, in fact, the same technique used within Spice programs (those where I've directly looked over the code used to generate these.)

When we say that the choice of the current direction does not matter it doesn't mean that we apply equations without taking into consideration the chosen directions.

So in the first equation you just need to change the sign of (V1-0)/5 and you will get the right answer.

We have only one node thus, only one equation is needed. If I assume that the unknown voltage is the highest in the circuit.

This is what we get:

And due to the fact that we have a dependent current source, we need to write:

After substitution the solition is

Not the answer you're looking for? Browse other questions tagged circuit-analysis current nodal-analysis or ask your own question.

33
How were schematics drawn before CAD?
2
How to find the nodal voltage when there is a voltage source across two nodes?