Why do crystals have 0° phase shift at series resonance? 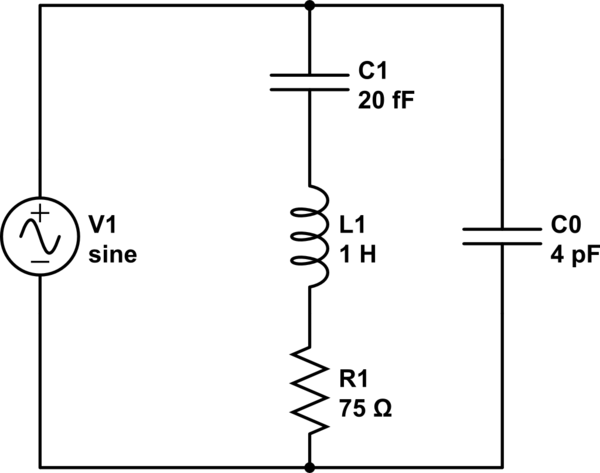 Series resonance occurs when C1 and L1 resonate. Because the reactance of C1 and L1 cancel each other at this frequency they can effectively be removed from the circuit as is shown in the circuit below.

Microchip application note AN826 agrees that the above circuit models crystals at series resonance.

Recall that series resonance is that particular frequency which the inductive and capacitive reactances are equal and cancel: XL1 = XC1. When the crystal is operating at its series resonant frequency the impedance will be at a minimum and current flow will be at a maximum. The reactance of the shunt capacitance, XC0, is in parallel with the resistance R1. At resonance, the value of XC0 >> R1, thus the crystal appears resistive in the circuit at a value very near R1.

However, this graph pulled from The Art of Electronics indicates that the current phase is zero at series resonance. Furthermore the caption states:

Note that the graphs of impedance and phase are unaffected by external capacitance.

If someone would please explain what the current phase of a crystal is at series resonance and why this is the case your help would be greatly appreciated. 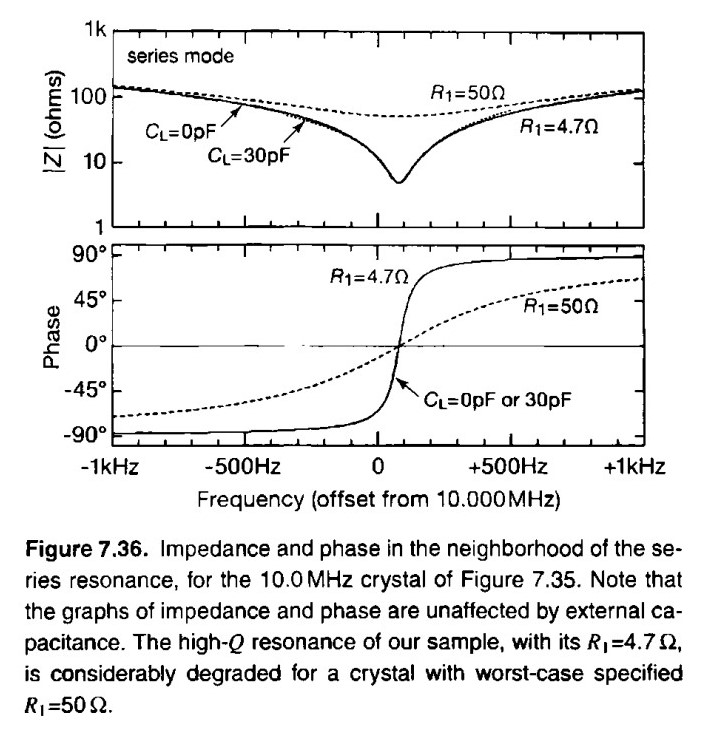 It is exactly the other way around: The frequency at which an L-C series combination exhibits a phase angle of zero is defined as series resonance frequency.

For the impedance transfer function, the series resonance always occurs 1st from L1C1 with resonance at 0 deg. The 2nd resonance is parallel with C1 in series with C2 making it slightly smaller at the slightly higher f with 180 deg phase shift, thus requiring an inverter for an oscillator.

Gain margin for stability depends on the attenuation at resonance which is limited by Rs in series and the external Rs for parallel that must be less than the gain (f) of the amplifier.

5
Why don't I need to consider trace width for a high speed oscillator crystals?
2
Questions about modelling a typical crystal radio and simulating in LTspice
3
Confusing quartz crystal impedance graphs
8
Why do MCU crystal oscillators not fry the crystals?
1
The equivalent inductance of a RLC in parallel
0
High power factor but maximum current at resonance in series RLC circuit
3
Definition of RLC resonance frequency
0
Multiple resonances in a circuit
3
Series RLC - how does resonance amplify?
2
Is this a valid way to measure/calculate a crystal's ESR with a function generator and current probe?