Analog television: What is the difference between the first IF and second (demodulated) IF?

I am trying to understand what kind of changes occur to a signal in the chips which sit between the tuner and, for example the FM audio demodulator.

Take the attached example - the TDA2546A. It takes 38.9 MHz IF from the tuner, which'll be downconverted only, but then it outputs a second IF which can be fed into its own FM demodulator, or to other demodulators in the set.

I understand what the right hand side of the chip is doing, but aside from the AGC - what is the left hand side doing? The datasheet doesn't really explain, and sure, it doesn't need to because this is standard stuff, but I don't know where to look!

For example, is it just downconverting the signal? performing AM demodulation? Thoughts appreciated. 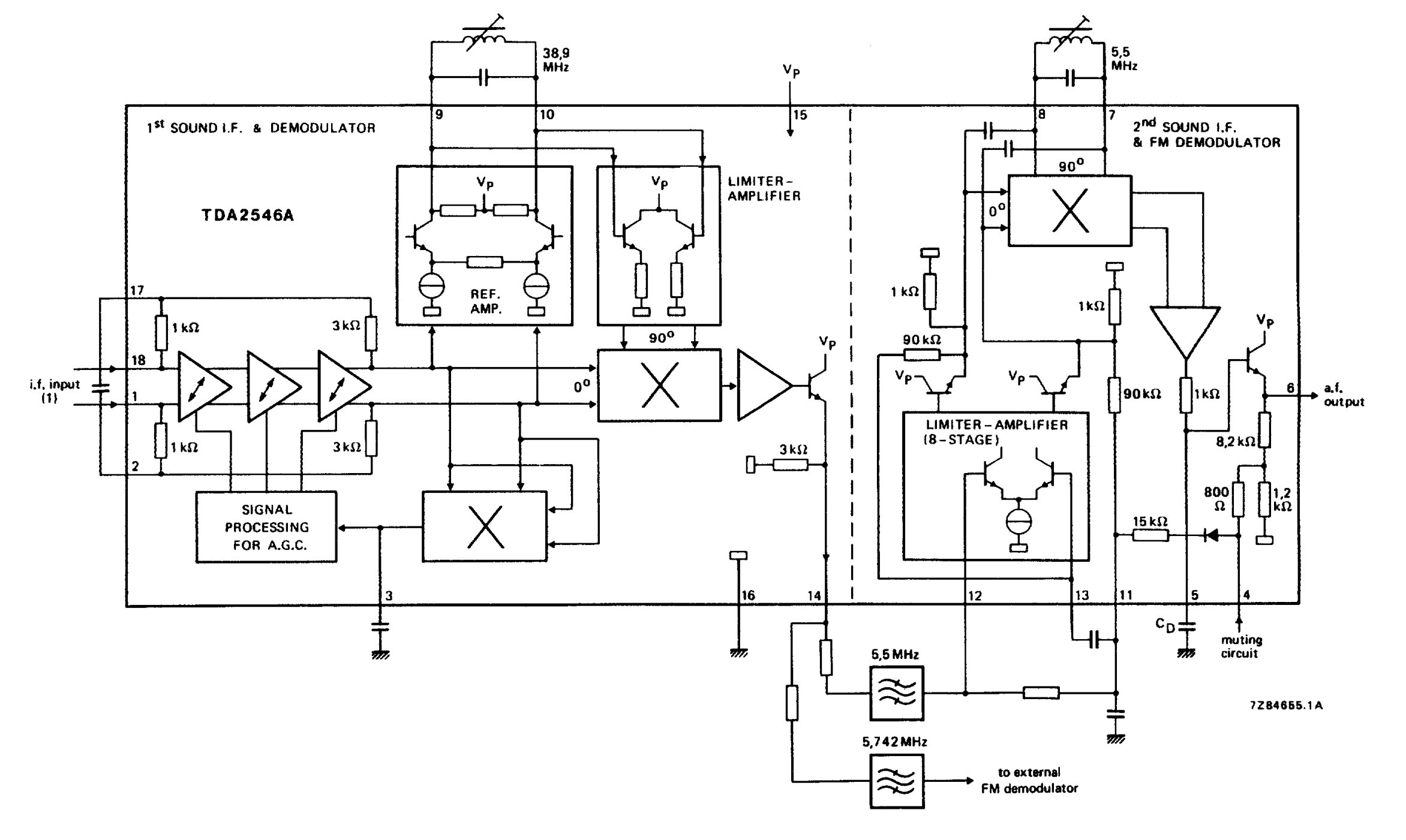 It's helpful to include a link to the datasheet even if, as you note, it doesn't explain the circuit operation.

Why is the video carrier frequency 38.9 MHz but the audio 33.4 MHz? On-air the audio carrier would normally be 5.5 MHz higher than the video, not 5.5 MHz lower?

what is the left hand side doing? ... For example, is it just downconverting the signal? performing AM demodulation?

No AM demodulation here. The left hand side downconverts the sound carrier from 33.4 MHz in the first IF to 5.5 MHz for the second IF.

The 1st sound IF signal at 33.4 MHz enters on the left of the diagram through 3 stages of gain controlled amplifiers to provide the automatic gain control feature. It is then applied to a frequency mixer and mixed with a 38.9 MHz signal, of which more later. The output emerges from pin 14. The difference signal (38.9 - 33.4 MHz) is selected by the 5.5 MHz filter and passes into the 2nd IF and demodulator stages.

In a conventional dual-conversion superhet design we would have a 2nd LO to generate the 38.9 MHz signal to drive the mixer.

However, rather than using a LO this circuit picks out the 38.9 MHz video carrier in the REF AMP circuit (presumably reference amplifier) with an external tank (LC) circuit tuned to 38.9 MHz. The tank circuit is specified (figure 2) to have a reasonably high Q of 60 so will be able to pick out the video carrier from the wider bandwidth video signal and also maintain the signal during dips in the modulated signal.

Recovering the video carrier in this way means we don't have two signals (from the video carrier and the 2nd LO) at about 38.9 MHz (but differing slightly) leading to the sound carrier being mixed twice to 5.5 MHz giving distorted sound.

The 5.5 MHz signal can be used on its own for mono audio. It can also be used to carry a stereo sum signal (left + right) for analogue stereo operation. In this case the 5.742 MHz signal (at 33.158 MHz in the IF input) is used to carry a stereo difference (left - right) signal. This will require a similar demodulator stage. The demodulated sum and difference audio signals can then be fed to a stereo matrix circuit to recover separate left and right channels.

(The particular split of 5.5 and 5.742 MHz is/was used for analogue stereo sound transmission in some countries. The same principle can be used with different frequencies for other secondary sound carriers in other countries.)

Not the answer you're looking for? Browse other questions tagged rf signal-processing demodulation tuning or ask your own question.

1
Whats the principle of a PLL used as demodulator of a FM signal?
4
Separating the AM and QAM components in PAL signal demodulation
0
direct conversion SSB (vs DSB-SC)
1
How to amplify RF signal to high enough level for a CMOS downconverting mixer?
12
Why is superheterodyning better than direct conversion?
2
Collpits FM Receiver
1
How can picked up FM noise be demodulated?
0
PWM/PPM with external carrier