Limit Number Of Pulses From 555 Or Similar

I need as small a circuit as possible that can produce 2 pulses (say maybe 200 milliseconds long and apart) when I press a button. My thought was to use a 555 timer and set it up for my desired pulse (exact timing not important), but I don't know how to limit the number of times it happens.

basically I will have a momentary switch as a trigger, and when I press it I need to produce 2/3 pulses in order to control something. I'm totally open to a better way to do this as well, but the circuit must be small, and it is only controlling an low power signal to play/skip songs with an android phone, so anything passive would be even better so I don't need some kind of power.

You can have one 555 timer be the enable for a second 555 timer. One in mono-stable mode and the other oscillating at whatever frequency your pulses need to be at. Then just make the first 555's single pulse long enough to contain how ever many pulses of the second you want. 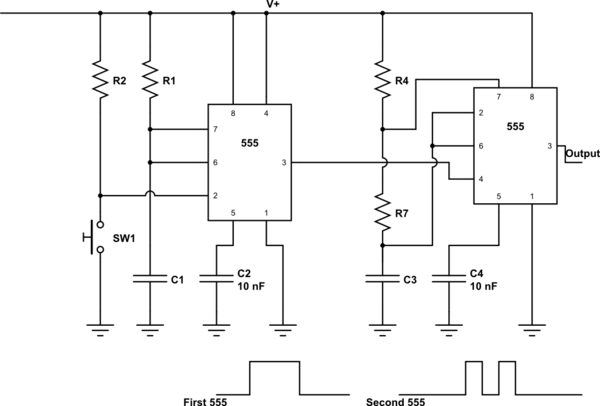 Note the pin numbers are not in the same spots for the two packages. This was drawn pretty quickly, so also check for errors :)

The ancient 666 timer is klunky and large for this. A much simpler solution is a tiny microcontroller.

The PIC 10F200, which comes in a SOT-23 package, can easily do this job. All it needs externally is a bypass cap. That will be a lot fewer parts and will be a lot smaller than any 666 timer solution, especially since you will need two of them.

The micro can also then properly deal with switch bounce, which the timer circuit could have a problem with.

Add an electrolytic capacitor across the 100k resistor in figure 1b.

The capacitor is charged by a momentary closure of the switch and thus holds the reset pin 4 high for a while for the 555 to run for a while generating a number of pulses before turning low.

The 100k resistor discharges the capacitor slowly, the time it takes determines the number of pulses that comes out of the 555.

The value of capacitor will depend on the period & number of pulses you want to generate. You'll need to experiment.

Where R is your 100k, C is the capacitance value.

X is the number of pulses desired & T is period of a pulse.

This question, and most of the answers, reminds me of when I had to put together a small regulated temperature chamber for testing a research ASIC.

I quickly put together a couple of transistors (one was the temperature sensor) and a few resistors to make a proportional controller and heater (an integral term would require a very large capacitor). I designed the thermal equivalent circuit to couple some of the ambient temperature to the sensor, so as to add a derivative term. So this was an electro-thermal PD.

It worked well and did its job. But in the end and after all of the time spent in mechanical tweaking and the lack of an integral term, I reached the conclusion: I wished I had just used a micro controller.

So. If you want to experiment and learn, go ahead. Put a few 555 together with some gates and tweak ahead.

But if you simply want to get the job done, use a micro controller. It will be one tiny IC and a couple of passives at most. It will consume less current and would be able to operate from a coin battery for years. 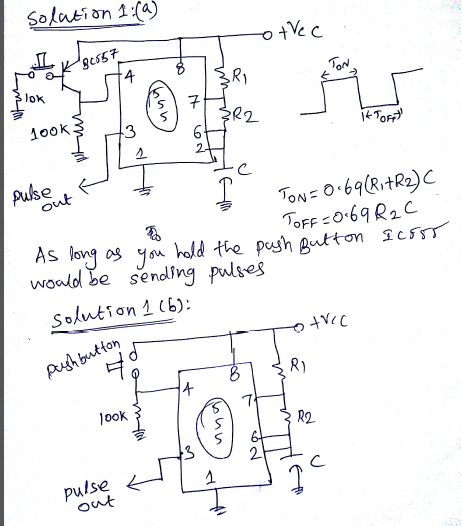 Not the answer you're looking for? Browse other questions tagged switches timer 555 button pulse or ask your own question.

0
Circuit to emulate 2/3 button presses
3
Best way to sync LED's to light NES figures on a wall clock?
1
Dimming an LED Strip (9v) with a 555 timer and MOSFET
4
555 fading in&out if possible with pwm & led array
7
Trouble getting 555 timer IC circuit to work properly (Make Electronics Book Experiment 18)
0
How can I toggle a one shot during the timing cycle?
3
General circuit debugging techniques, and my 555 timer in particular
0
555 auto-off timer circuit validity
0
555 Timer in monostable mode with reset on the same momentary button
0
1Hz pulse generator - LVCMOS 1.8 output